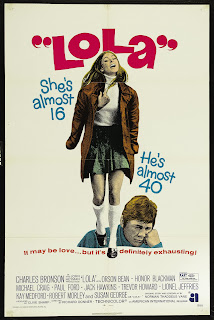 I went into this this movie expecting something really pervy and salacious. It struck me as being a comical spin on Lolita, which isn't completely off, but not exactly accurate either. Charles Bronson plays Scott Wardman, a pornographic American novelist living in London. He's having a rather juvenile relationship with a barely 16 year old girl, Lola, played by a young Susan George (Straw Dogs, and a great episode of the Persuaders, "the Gold Napoleon"). Lola's parents find out about their affair because she stupidly writes about it in her diary and leaves it around the house for her mother (Honor Blackman) to discover.

Which is Unlikely Scenario # 1, What kind of teenage girl documents her sexual escapades? Let alone her ILLEGAL ones.

Her parents are of course outraged and threatening him with legal action. As Lola tells him this he responds like your typical self centered middle aged bachelor who should have known better. He blames her and takes no responsibility for his actions. Despite his selfish lust that he's mistaken for love, men like this don't seem to realise the mental and emotional damage they could cause a young girl by allowing themselves to lose their wits when encountering a pretty face and body that's off limits.  Or maybe they just don't care? In this case I think I'm taking it a little seriously. This movie makes light of a taboo and I guess that's the point. Amidst all of this, his visa expires and he's soon to be deported back to America. So what do they do? 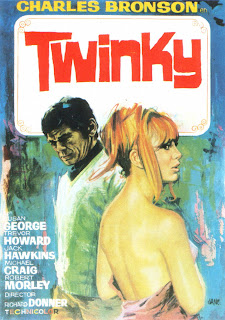 Unlikely Scenario #2, they decide to get married. She suggests it and pouts when he brushes it off as maybe not the smartest idea. So like a father and a spoiled child, she gets her way. They decide to move back to America where his family and publisher are. He doesn't bother telling his parents so as soon as they arrive, the Mother and Father are greeted by a mini-skirt clad child bride, making this Unlikely Scenario # 3. They decide to stay with his parents for a while, sleeping on the living room floor outside the shared bathroom. Bronson gets arrested for punching a cop (of all things to get arrested for in this movie). During this time, Lola decide she can't take living with his mother anymore and goes out to find an apartment of their own. When his publisher tells him, he's actually proud of her because she wasn't willing to stick around to listen to his mother cry. Sounds to me like his mother has a lot to cry about.
When he gets out of jail and heads for his new apartment, she's not only having a loud party, but she hasn't even informed the doorman that she has a husband. When he insists the doorman call up and ask her, distracted and being a general retard, she says no! Possibly, Unlikely Scenario # 4, but at this point I've lost track. The whole movie is an Unlikely Scenario.
It was hard not hating this girl. She was completely annoying and acted more like a 10 year old than a 16 year old. Playing with dolls and flopping around like a giant long legged kid. Then again, I remember being 16 and naive, thinking I was "in love" with dorks and losers I should have never dated in the first place. That's kind of apart of being 16. He , being the ADULT, should have known better. He should have had the foresight to see that this was a big mistake. If he really loved her he wouldn't want to ruin her life by making her try too grow up so fast. Their relationship was doomed to fail from the beginning, only a fool or a teenager (same thing) couldn't see that. Annoying or not, the whole situation was his fault and I'm glad she irritated the shit out of him. 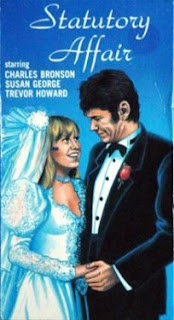 If anything this movie is a PSA for why NOT to do this! This was Richard Donnor's second movie, after Salt and Pepper. He would of course go on to make the Omen, Superman 1&2, the Goonies, and Ladyhawke. I also discovered that he directed one of my all time afterschool specials, Sarah T. - Portrait of a Teenage Alcoholic starring Linda Blair. Lola (aka Twinky, and my favorite alternate title "the Statutory Affair") isn't a complete misfire but it is lagging in believability. It had some humorous moments and some of the cuts were interesting, but for the most part you're wondering where the hell they're going with this. You're waiting for the proverbial train to wreck. And so it does, and it's still not completely satisfying. It's not amongst any of the actors' or director's best work, but it's worth a look for curiosity's sake. It's mockable and I can dig that.
Posted by Scumbalina at 8:12 AM