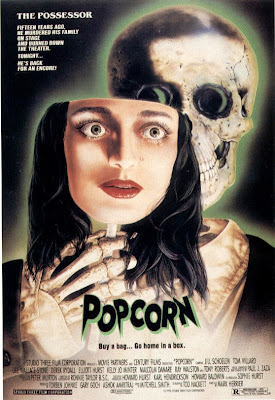 I always used to see this on the shelf at the video store and think how badly I wanted to see it. For some reason I just never made the leap. But when you still watch the same kind of movies you did when you were 12, it's never too late. So now that I finally own it I had no excuse not to find out if it lives up to it's amazing cover.

It stars 80's/90's B-movie actress Jill Schoelen. Growing up I knew her as Mary Contrary from the 1986 epic crapfest Babes in Toyland, which may very well be what gave me my first taste of an addiction to shitty 80's kids movies. As I got a little older I noticed that she didn't limit herself to bad family movies, she had a huge career doing horror movies as well! Most notably (for me) the Stepfather, but also Cutting Class, When a Stranger Calls Back, Chiller, the Bite and Phantom of the Opera (1989). I pretty much know that if her name is in the credits that I won't be disappointed. This was 90's Schoelen though, when her cuteness was turning into more of a dorkiness. 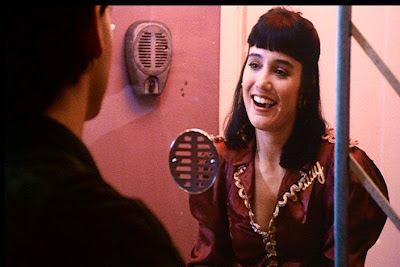 Click von linky for the rest of the review plus pictures... 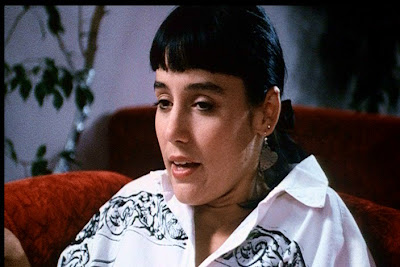 This movie is kind of all over the place. It follows the movie within a movie formula, which I love! And even takes it step further by being SEVERAL movies within a movie SET a the movies. It has a rare quality I've only really seen in the unsung masterpiece Anguish. A girl haunted by nightmares of a scary long haired guy trying to kill her with a wavy knife (what are those knives called anyway?). She's a film student and her class decided to raise some money by renting out a theatre and having a horror film festival complete with William Castle gimmicks. Ray Walston makes a brief (and almost unnecessary) cameo as the guy with all the props. Amidst the set up for seat zappers and giant mosquitos they find a small reel of film that says "do not open". Of course, they do and put the reel on to watch it. It's an unfinished artsy horror piece called the Possessor. It features a long haired scary guy trying to kill people with a wavy knife...Wait!...it's the guy from Jill Schoelen's dreams, Aw Shucks! He was a guy who had a "film cult" (note to self: start "film cult") in the 70's that was like John Cassavettes meets Charles Manson. He took the criticism of his movies so hard that he killed his family in front of an audience and filmed it. Well, tried to anyway. The theatre burned down instead, his body was never found. I read that the character was based on Jose Mojica Marins, which if you've seen any Coffin Joe movies you know that this is a totally awesome and passable reference! 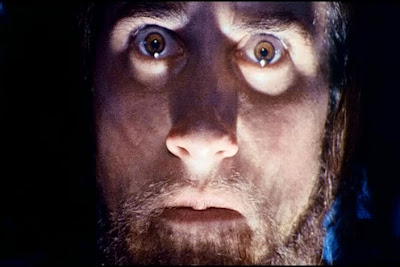 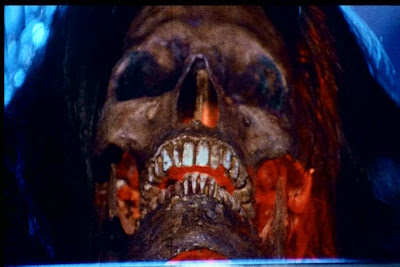 So it's opening night lots of fun hijnks are afoot. Except that some jerk keeps killing people! The movies they're showing are so cool. They do a great job recreating 50's and 60's Cormanesque creature features. My favorite was the obvious Man Made Monster inspired one starring Bruce Glover, who I'm always happy to see! 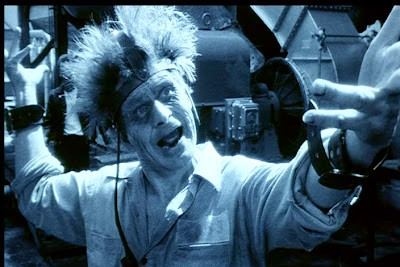 It's alternate title is Phantom of the Cinema, and that would have been fitting too. Although I much prefer the awkwardness and ambiguity of "Popcorn". It's basically another retelling of Phantom of the Opera. Popcorn has a lot of things going for it. Intentional (and probably unintentional) humor, it was filmed in Jamaica so there's a lot of out of place reggae music. It's easy to forget that this movie was made in 1991. It really feels 80's. There's a lot of fun to be had here. I read that the title "Popcorn" was relevant to something in the movie (other than being set in a theatre), but when that scene was removed the producers like it so much they decided to keep it. Good choice. It's video generation kitsch and I absolutely love it. I have to concur that Popcorn lived every bit up to it's wonderful cover art and my expectations.
Posted by Scumbalina at 1:27 PM