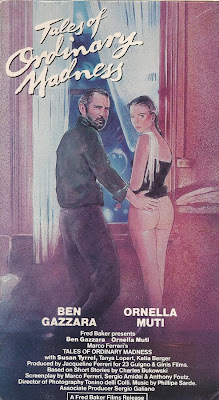 I have a confession to make. I've never really been able to get into Bukowski. Granted, I never tried very hard but I always found his drunkenness off-putting. I'm not one of those people who sees anything admirable in being a debaucherous bum. So basically, I have a hard time being able to look at his work objectively because I find him to be a disgusting abusive alcoholic. He's obviously a great writer, I get that, but I find it totally unrelatable and unreadable for me personally. Movies, however, are completely different. I've seen some awfully rough and rowdy flicks that are also unrelatable but being a visual medium makes it much easier to take in. That's how I feel about Bukowski movie adaptations in general. I've liked pretty much every one I've seen because it's fun to watch a crazy person do crazy things.

Ben Gazzara plays Charles Serking, an unemployed writer who spends most of his days drinking and fornicating. He feels up 12 year old midgets and stalks trashy women at the bus stop. Susan Tyrrell makes a refreshing appearance in this movie as Vera, a crazy loon (like Tyrrell does best) who just happen to enjoy men stalking her, following her home and basically raping her. She fakes passing out several times and screams in pain when she's actually enjoying herself. Then she gets her final kicks telling him she's going to make him some steak and eggs and calling the police while he's in the bathtub having him arrested for "sexual violence". This is one of many gross liaisons Serking has. My favorite being when after he's had sex with a fat woman he tries to shove his head inside her to re-enter the womb.

Serking meets a beautiful prostitute (the stunning Ornella Muti) who is extremely self destructive. Not in the get drunk to the point of puking on yourself way that he is. Inserting sharp things in her face, slashing herself with broken glass and even pinning her vagina shut with a giant safety pin. He develops feeling for her, this is the kind of woman that inspires his writing and personal sensibilities. It's of course a momentary obsession. Such masochistic people aren't really capable of much more than unhealthy obsessions. As you would imagine, this "relationship" is doomed for both failure and emotional and physical disaster.

Italian Euro-sleaze-mesiter Marco Ferreri (of La Grande Bouffe fame) directed this lurid adaptation of Bukowski's short stories. It has a much more serious tone than say, Barfly. Drenched in eroticism and melancholy, this movie certainly has an Italian flair. Gazzara did a wonderful job portraying the self deprecating writer, but Susan Tyrrell still reigns supreme is saving this movie from depressing awkwardness with her usual (and all too brief) charismatic psycho-freak-out. 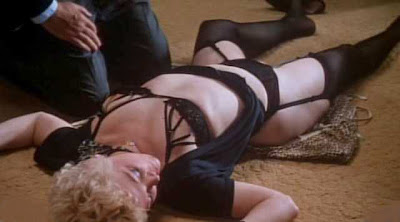 This was one of the other few videos that I wasn't aware had a DVD release now. Had I know I probably would have passed it up and just rented it from Netflix. I didn't enjoy quite as much as Barfly, but it's still one of the best entries (arguably thee best) to Bukowski's film adaptations and is totally worth checking out for it's sheer perverted weirdness. Lord know I'm guilty for wanting to see a bit of that every now and then.
Posted by Scumbalina at 10:32 AM