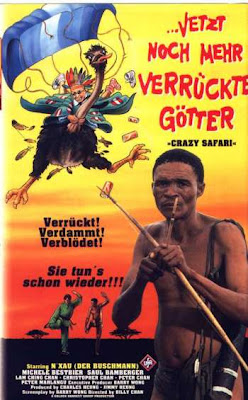 There was once a time when seeing the Gods Must Be Crazy was probably a unique viewing experience. A quirky native African finds a coke bottle and it comically turns his village upside down. I always thought it was a great movie and wasn't surprised to find out it spawned several sequels. However, I was surprised to learn of just how strange some of the sequels got. Crazy Safari (Fei zhou he shang), also known as the Gods Must be Crazy III, isn't about the misadventure caused by your everyday litter bug. In the third installment a Chinese Vampire is dropped from a plane flying over the same village in Africa.

The great-great-great grandson, "Sam", of the deceased is transporting the corpse back to Hong Kong to have a proper burial. He enlists a Taoist Monk (Ching-Ying-Lam of Mr. Vampire fame) to control the ghoul with paper talismans with Chinese script on them taped to it's forehead. All is going well until the plane's engine fails and they all have to abandon ship. And wouldn't you know it, our pudgy Chinese Vampire lands right in the tribe of everyone's favorite Bushman, N!xau. At first they're frightened of the creature, but being the gentle natured people that they are, they learn to live with him. Clever N!xau learns to control him like a pro! Meanwhile Sam and "the Wise One" are scrambling around running from rhinos (with human feet), lions, riding ostriches and having their food stolen by baboons. 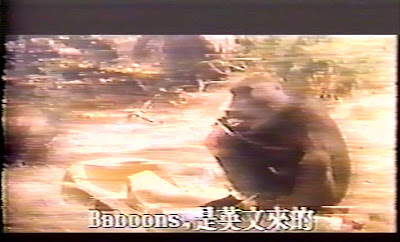 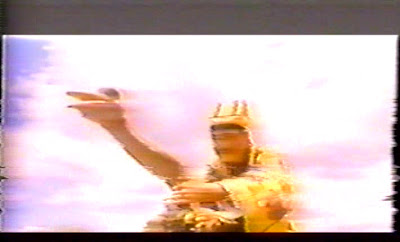 Click "read more" for the rest of the review and lots of pictures....


Back at the Bushman tribe they're currently dealing with their own problems. An aggressive rivaling tribe is trying to invade, plus they are some pissy white people after diamonds. My copy of Crazy Safari left something to be desired. For one, it looked like an tenth generation beta transfer and then there's the whole language barrier thing. Since it is a comedy and humor transcends all cultures, it was still very enjoyable and became more interesting as it went along, my details on the exact plot might be a little fuzzy. Apparently Stephen Chow narrates on the Cantonese version. The music was great. There were several times I noticed distinct similarities to the point of being obvious rip-offs of both Pee Wee's Big Advetnure and E.T. 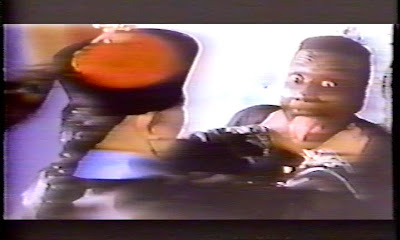 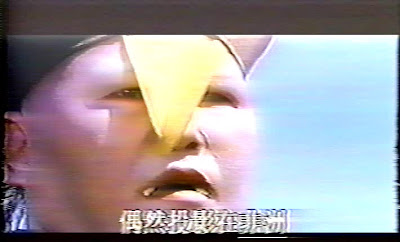 When Sam, the Wise One and the Bushmen finally meet up after a minor skirmish they realize they're on the same team.They both have the interest of the deceased at heart so before the three head back to Hong Kong N!zau asks them if they could help fight off of the invading tribe and the greedy Americans. This is when things started to get a little weird. 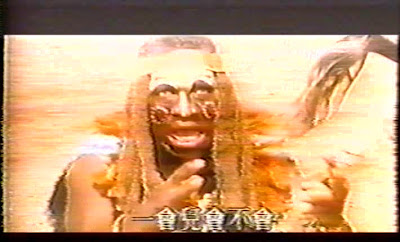 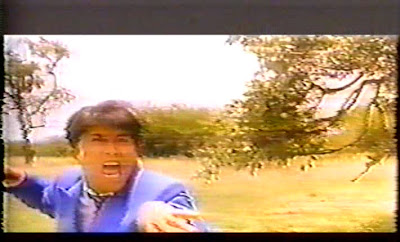 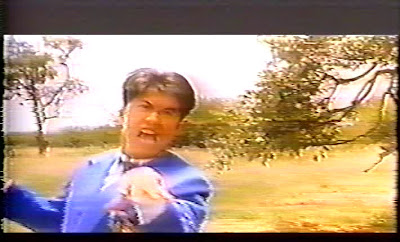 As a last resort, the Taoist does the unthinkable.

He invokes the spirit of Bruce Lee into N!xau's body. 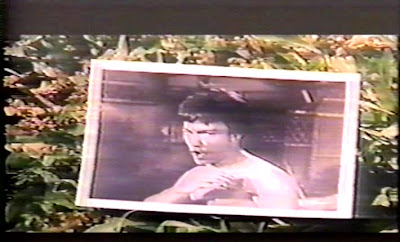 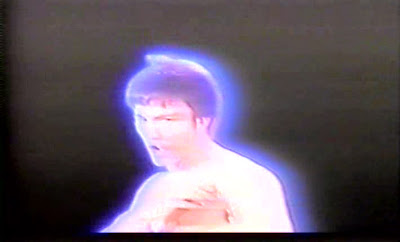 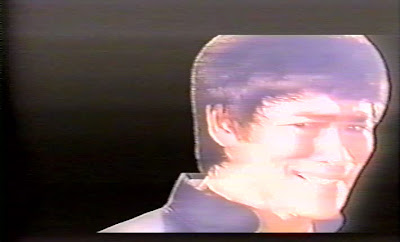 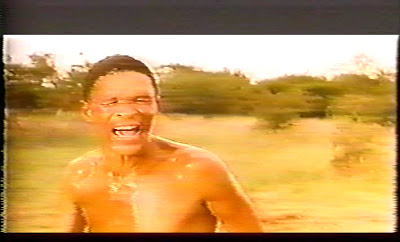 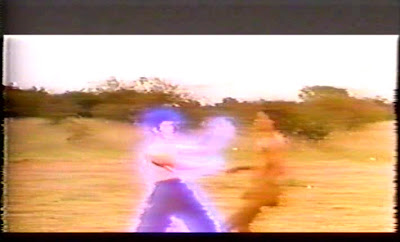 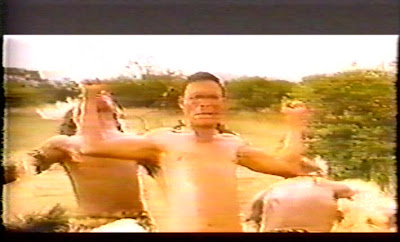 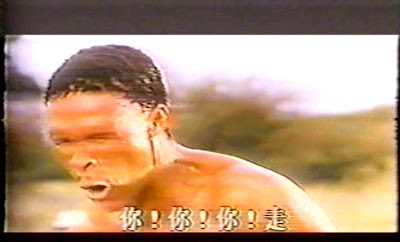 As if the mixing of genres wasn't already bizarrely unkosher, now we have good old fashion bruceploitation thrown in the mix! And with N!xau of all people! You have no idea how this made my heart melt.

In the end, all is right in the world. N!xau kicks everyone's ass, the China-Vamp is well on his way back to Hong Kong and now I can cry myself to sleep. But wait! That's not all. This was followed by TWO MORE SEQUELS. Crazy Hong Kong and the Gods Must be Funny in China. Oy vey!

what's a girl to do? 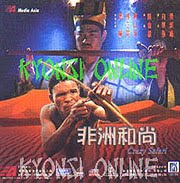 Posted by Scumbalina at 1:01 AM