EDIT: Per the request of a random internet whiner, allow me to warn all readers of this review of a 45 year old Night Gallery segment running approximately 11 minutes that I spoil the ending in this review. If this is at all important to you as it was the concave penis'd cabbage fart who insisted I alter my 4 year old review, I say avert your eyes or adapt. My blog and if you don't like my spoiler you can suck it.
- - - - -

I was was recently reminded by a friend of how amazing Night Gallery was. It's been a few years since I've watched any but growing up it was always a treat to see re-runs of this clever outlet of Rod Serling's infinite talent. When I got a little older I started reading Lovecraft and making connections to movies I already loved. In my studies I discovered that there had been an episode of Night Gallery based heavily on Lovecraftian mythology. Episode 14 of Season 2, Professor Peabody's Last Lecture. It became an instant favorite. I decided to give it a re-watch today. 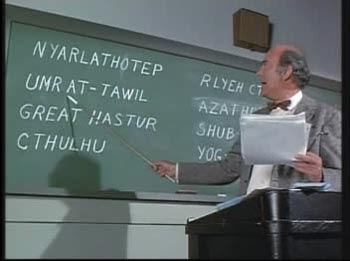 Firstly, and very importantly, it stars Carl Reiner. A living-freaking-legend. Dead Men Don't Wear Plaid and Summer School were ESSENTIAL to my youth. Not to mention his comedic stylings alongside Sid Caeser, Mel Brooks, and young Woody Allen when he was just getting started writing. The man's a genius and it's always nice to see his involvement in any project. Add H.P. Lovecraft and Rod Serling to the equation and the mastery is STAGGERING.

The episode, being only 11 minutes, is like a highly concentrated shot of espresso. Heavily saturated in Lovecraft lore. A lot of "Lovecraft inspired" sci-fi is very loosely based, or in recent years just poorly made. It seems like anything with ancient gods or tentacles can be deemed worthy of H.P. Lovecraft's name emblazoned all over it. This brief but potent Night Gallery episode contains more Lovecraftian elements and trivia than most full length movies. It's almost like a little class of Lovecraft 101. It breaks down the mythos at it's most basic level. There are these Gods called "the Great Old Ones", Professor Peabody speaks of this cult with great cynicism and a tone of profound mocking. He pulls out a copy of Necronomicon and begins reciting like an over zealous thespian. Most of what he reads is from The Dunwich Horror, by the way. The majority of students are bored but a few show concern for his careless disrespect of the Great Old Ones. These students names are a "Mr. Bloch" (Robert Bloch was a fellow writer and correspondent of H.P.), "Mr. Derleth" (August Derleth, another fellow writer and publisher of Lovecraft's early works. He also co-founded the Arkham House publishing company) and then of course a "Mr. Lovecraft" himself. 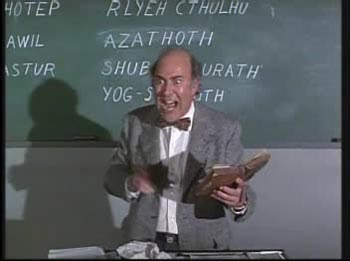 After Professor Peabody reads several passages from Necronomicon with great anguish, a windstorm begins to form. Dark clouds and vengeful thunder stir. As the professor's tone becomes more intense the storm becomes more enraged. Finally in a climactic finish the storm calms as the professor poses to the class "and now if there are no further questions", he's revealed to have turned into a slimy, cormanesque, grody salad bar, pseudo tentacled monster man. 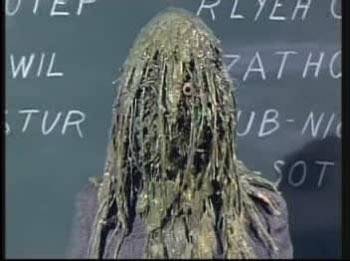 For such a short segment, Professor Peabody's Last Lecture packs a powerful punch of Lovecraftian information. It's a ball for the scholarly fan and also a good entry level example for people just getting into the world of Lovecraft. Whatever the case may be, you can watch the whole short on youtube. For anyone with 11 minutes to spare, I say Why Not!


I might also plug the book, "The Lurker in the Lobby: A Guide to Lovecraftian Cinema". Although I'm sure there are many fine lists online dedicated to this subject. Having such a vast spectrum of material, I find it's best to have a hard copy lying around for quick reference. It's a wonderful compendium! I've gotten a lot of mileage out of my copy in the few years I've owned it. 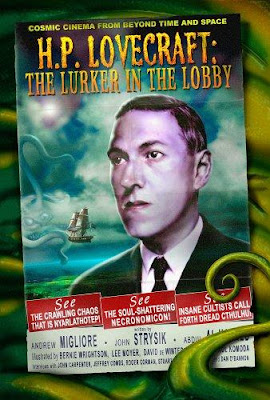 On that note, I'll leave you. This review turned out to be more of a celebration of Lovecraft than anything else, but with a piece as submerged in the world he created as Professor Peabody's Last Lecture it's hard to think of much else aside from the creatures of the dreamlands that such an infectious inventor created for our reading, and much to his dismay*, viewing pleasures. 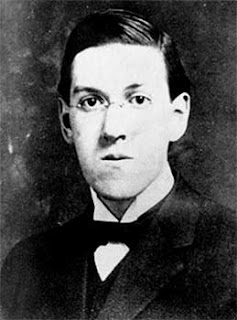