Put this in perspective: you're having an evening stroll through your village and suddenly a floating head with it's intestines dangling beneath appears. A type of Eastern Vampire which prefers the blood of new born babies, but will settle for what it can get. Can you imagine a more bizarre sight? Discovering such a thing whether it be through folklore or pop culture is a joyous event. I've seen many a'creature feature in my day but three years ago when finally saw the Indonesian classic Mystics in Bali, my life would change forever. Not only is it an epic horror gem in it's own right, but it it also introduced me to this rare and beautiful creature. I did some research and found out that it's origin is of Malaysian folklore, in it's original language the creature is called "Penanggalan" which means "to detach". There are other variations as the legend spread to other countries, in Indonesia it's called "Leak" after the black magic that is required to invoke the beast. I discovered that there are dozens of East Asian horror movies featuring the Penanggalan, many of which are still being made today, most of which are impossible to find here in the States unless you have some good trade connections or know where to order them over seas. In my hunt I came across one of the only other semi-findable Penanggalan films, the 1977 Chinese movie, The Witch with the Flying Head (Fei taugh mo neuih). 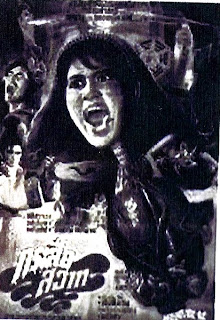 That's right. The Witch with the Flying Head. It doesn't get much more straight forward than that! It's this kind of straight-froward-ness that I respect from an otherwise incomprehensible movie. I might also add before delving into this that reviewing a foreign movie with no subtitles isn't easy, so bear with me.
A Wicked Warlock of sorts stumbles upon a group of women and I presume wants to possess or maybe just wants to fuck with.. He makes a snake appear and it promptly crawls into the vagina of the prettiest girl. Writhing in pain, her sisters (I assume) try to help her but nothing can stop the intense pain. Mr. Warlock approaches with the solution! If she takes the potion he has for her it will stop the pain and she will be healed. They seem a bit apprehensive, and rightfully so. The potion was the final element in completing his spell.

She's momentarily relieved but will spend most of the next few days vomiting up snakes. 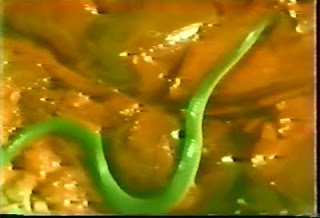 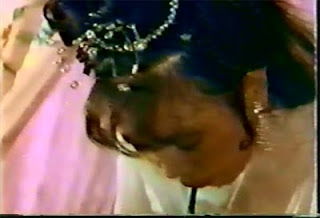 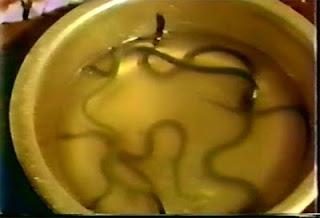 
After this little episode she is finally a fully developed Penanggalan. At night her head detaches from her body and she hunts for human blood with a really goofy looking set of under-bite fangs. Expect lots of killing in this one! You get to see her wrath over and over for a good half of the movie. The plot started to lose me a bit in the middle when she meets a man who seems to be ok with her "disability" and marries him. Some time passes without any problems. She gets pregnant and has a baby, this brings back her lust for blood. Remember, Penanggalans especially love new born baby blood! One of her sisters sacrifices herself to save the baby. Cut to awkward funeral scene. Curse or no curse, I think at this point I start to resent her and want to be FAR FAR AWAY! The end gets really jumbled as the evil Warlock comes back with his band of serpent cronies and lots of emotional stuff that doesn't translate well with the whole "no-subtitle" thing. In the end we are left with a KICK ASS battle between our lady Penanggalan and the Warlock serpent guy. 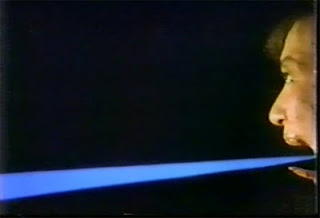 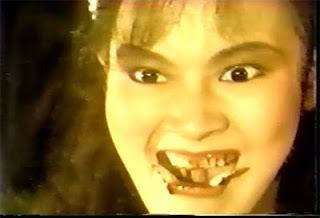 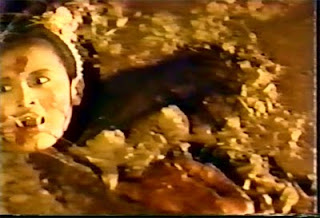 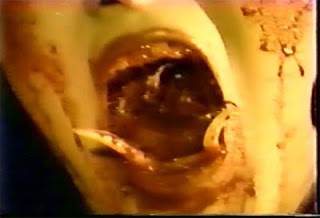 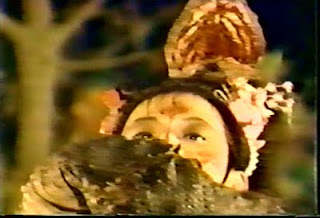 
This film may not be for everyone's taste. Few people have the patience to see what a subtitle-less film has to offer. I honestly think this one has a lot to offer. I was kept pretty thoroughly entertained throughout most of the movie. It doesn't quite measure up to Mystics in Bali but I didn't expect it to. It's a nice, solid little Chinese monster weirdy and if you are interested in seeing it feel free to check out my trade list  and contact me. ESPECIALLY if you know where I can get other Penanggalan movies, as of now this and Mystics are all I have. So my big quandary is; why are Penanggalan movies so hard to come by in America? More so, why aren't they being made here?! It's a tradition I think should carry on to Countries outside of Asia. How many carbon copy zombie movies do I have to see before I get ONE homegrown Penanggalan?! For now, they'll just have to live in my dreams with unicorns and gryphons.

Until next time, stay cool and for your own sake, keep the snakes out of your vagina! 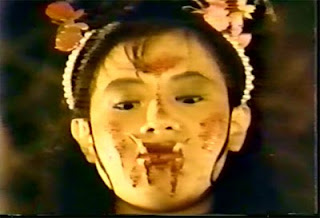