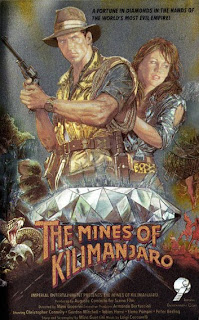 I almost forgot to review this one! It was just that forgettable. One of the many low budget Italian Indiana Jones rip-offs. Which is partially entirely the reason I wanted to see it. Confusingly, the character who looks and acts like Indiana Jones is killed in the first 10 minutes. The "hero", Dr. Barclay, steps in to find out why his friend was murdered. This guy is a total fop. He's a geek and has no screen presence for a roll like this. I expect my Harrison Ford-a-likes to be rugged, or least resemble Ford is some way, be it looks or behavior. Tobias Hoesl had no character at all. He was practically sleep walking through the whole movie.

Based on some scribblings by the Professor, Dr. Barclay heads to Africa to investigate the murder and pick-up where he left off on a hunt for some big ass diamonds. Our bad guys are the high light of this terrible mistake. A German guy that looks like Heino, and a painfully over the top racially stereo typed "Chinese" guy with a fu manchu moustache who's obviously a fat Italian man.

They're all after the diamonds, the movie is set in the 30's, there are Nazi's, etc, etc.  Nothing really exciting happens. I felt bored throughout this entire movie. The cool holographic box was the selling point. I 'm only reviewing it because I said I would when I listed my Video 98 findings. I've gotten some new stuff since then from there, but I won't be making any promises about reviewing those for this precise reason.


Luigi Ceccarelli did the music. He also did the scores for Women's Prison Massacre and Violence in a Women's Prison. For some reason Franco Bixio owns the copyright to the score, which I thought was kind of strange.

This movie doesn't have enough going for it to give a second look. From what I've read there are other more entertaining Italian Indiana Jones rip-offs, such as Hunters of the Golden Cobra and Ark of the Sun God. Other than a sparkley box and a few laughable costume choices, this is an all around disappointing video find that's already found itself a cozy spot on my shelf to collect dust for an eternity.
Posted by Scumbalina at 12:45 AM