I'm starting to deplete my once bountiful reservoir of horror related Christmas movies. This all stemmed from Jack Frost and Black Christmas becoming perennial regulars, a tradition echoed in many horror fans' routine.  But honestly, there are few movies I watch over and over again every year. I'm constantly searching for something new. Going through the belated-to-me Silent Night, Deadly Nights and discovering rare beauties like 3615 Code Pere Noel and Feeders 2 is what it's all about! This year was my first since doing these intense holiday marathons that I worried I was running out of ammo. My made-for-tv and non-horror garbage fart peccadilloes will aid me in this never-ending project. These are the most notable, including a few of the worst. There were certainly better Christmas movies than a few of these, but these are the ten I've chosen to discuss for the following reasons.., 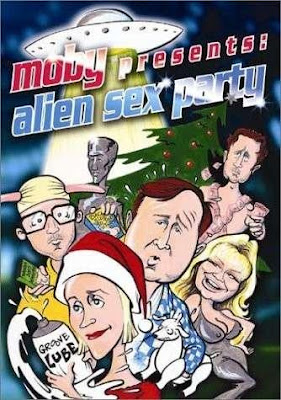 It's becoming a trend that the worst movie I see all year happens to be one of the wretched Christmas choices I make. This one looked pretty dumb but with a title like Alien Sex Party, Presented by MOBY no less, it could be fun?  There was of course a good chance it would completely suck, but I couldn't have foreseen the level of suck. The only thing I hate more than a self-fellating Kevin Smith movie, is a pretentious rip-off of a self-fellating Kevin Smith movie. Alien Sex Party is openly trying to be Clerks, in a porn shop. I'm not one to give Clerks any credit, but it obviously had some kind of impact because shit like this was made. The actor who plays 'Dante' even makes a cameo. Filled with nauseating forced dialog, attempting to sound "real". Describing sex acts to "shock" the audience. The whole thing was extremely painful and had my face contorted to a permanent cringe. I have no idea why Moby would have anything to do with something like this, which is of course why he later tried to distance himself from it. This wasn't only the worst Christmas movie I saw, it was the worst I saw in 2015. Thinking back to last year, it gives "Yule Die" a run for it's money too, making this the worst, most difficult movie I've endured in several years. Every minute felt like years were taken off my life. It's times like this I wonder why I force myself to watch bad movies anyway, movies like this make me re-think my whole philosophy on movie watching because I can't do this shit. Next time I'm met with such misfortune as a Clerks rip-off, I'm turning the goddamn tv off and going to bed forever. 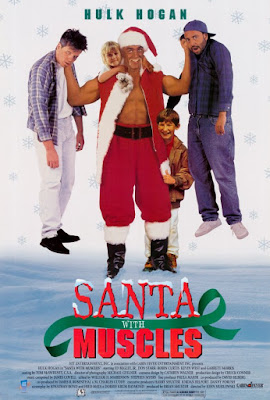 Anytime the catalyst for a plot is amnesia in a movie, you know you're in for a winner. Throw Hulk Hogan in a Santa hat in the mix and you've got yourself a cult classic. At some point in Hulk's career, he was an unstoppable force. Movies, tv, toys, he was everywhere. None of the movies he starred in make any sense and are watchable by normal standards but the sight of him makes it all forgivable. This came out on the latter end of his success. Christmas movies are the tell tale sign of dying (or dead) stardom. There are no surprises here, it's just a comfort. It's Hulk Hogan interacting with kids dressed as Santa, it's like a lullaby. That's my story and and I'm stickin' to it. 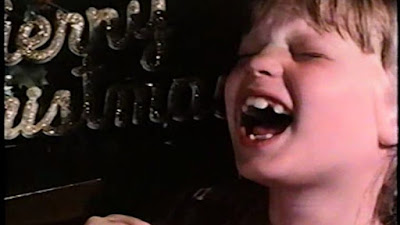 This Anthology horror film starts with two un-notable, non-seasonal segments. The final segment is about two kids who go to Grandma's house for Christmas while their parents go to Hawaii only to discover that Granny has run out of meds and is a nutjob. She, in various ways (comically) tries to hurt, kill or just scare the kids throughout their stay. On Christmas Eve she chases them around the house with chainsaw, in her wheelchair mind you. The segment ends with an expected and very satisfying conclusion. You could almost skip the first two segments completely and go straight to the seasonal favorite next Christmas! 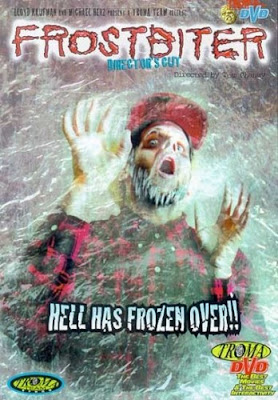 A long time ago I had a goal of seeing every movie in Troma's huge distribution catalog. I have seen a lot but now it's a more passive goal. Any time I have the chance to chip away at it a little I feel a real sense of satisfaction. Much like, Winterbeast, which I watched last year, Frostbiter isn't necessarily a Christmas movie. It's a snow monster movie, which I like to throw in the mix for seasonal posterity. Frostbiter is about a Wendigo monster (ancient Indian forest spirit beast, kinda Sasquachian) that terrorizes hunters and local forest folk. Low budge, but made with love. Nice practical effects, stop motion and lighting. Has some Things moments, and is clearly influenced by Evil Dead. Some pretty awful musical choices were made but it's forgivable. Would make a perfect double feature with the aforementioned Winterbeast. Nice and eazzzzy. 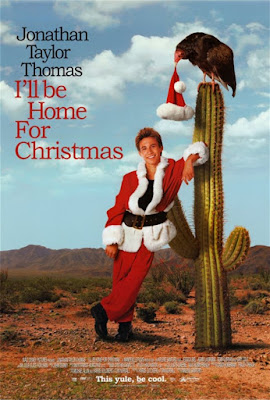 I'm not gonna lie, I've missed JTT. I was the right age when he was being forced down every adolescent girl in America's throat. I may have even had a crush on him, who knows, I had a crush on everyone. Lion King and Home Improvement aside, his body of work was mediocre and with time and has only become less remarkable. This is not a slight towards JTT, his output was simply a product of the times and the age demographic. By the time "I'll Be Home For Christmas" came out I was beyond over movies starring former Tiger Beat heart throbs. Even at age twelve this kind of thing seemed incredibly square. Then you grow up and the things you rejects become appealing simply for being vaguely connected to your youth. I'm taking the long way in explaining why I picked "I'll Be Home For Christmas", but the truth is, like the dog movies, I don't really know why I settle for these things. It must be neurological. The shocking part about this one is that I kind of liked it. JTT is a student going to college in LA, his Dad bribes him with a porche if he can get home in New York by Christmas. Predictable road trip hi-jinks ensure, and he's stuck in a Santa suit. It is indeed a messy little cliche'd piece, but it's not without it's charm. There was an unexpected kitshiness that I relish. In one scene he's stuck with a bunch of Grannies on their way to see Tom Jones in Vegas. 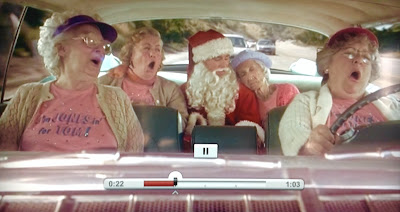 This is as "me" as any still from any JTT movie will ever be. It turns out director Arlene Sanford also directed 'A Very Brady Sequel'. Mystery solved, she rules. 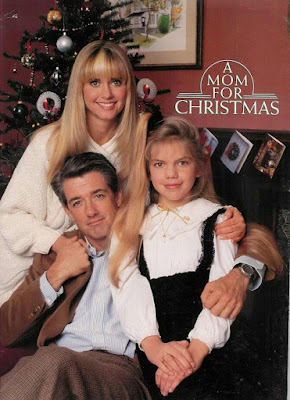 It wouldn't be Christmas without a made-for-tv movie or two about some orphaned state of childhood. This was background fodder but ended up being one of the most enjoyable shit-shows of the season. Nice little festive Mannequin rip-off. Olivia's here being beautiful, ditzy and pretending to be Mom-like to this motherless girl. There's no chemistry between her and the Dermot Mulroney/Clu Gullagher love-child-clone-dad but it's all apart of the charm. Also, there are these weird soul-less mannequins. They represent a Mannequin hell or something, this could be Olivia's fate if this whole Christmas Mom thing doesn't work out... 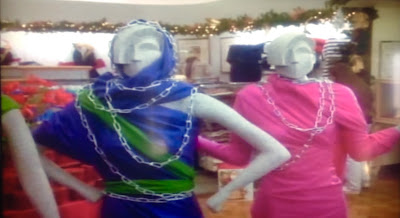 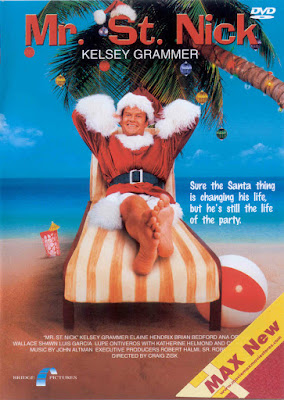 Kelsey Grammar plays the spoiled son of Santa and it's almost time for him to take over the family business. But does he really want to give up his sweet bachelor life in Miami? This one is conceptually weird from the get-go. Frasier (we're just calling him Frasier for short, ok?) wants to start a website so he can ease into the role of Santa without disrupting his chilled out beach life. Why go through the physical process of Santa Clausing when he can just rely on the innernetz. Corrupt Hollywood types, immigration scares, and Frasier in a red suit and tie instead of a traditional Santa suit. It all comes together in a malady of Holiday awfulness. Basically only watch this if you're truly inspired by the site of Frasier on the beach, with palm trees, dressed as Santa. You could probably get the same satisfaction from staring at the box. 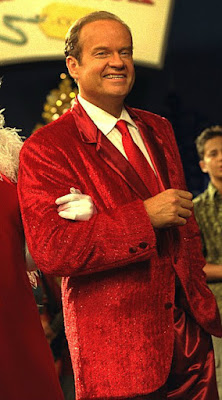 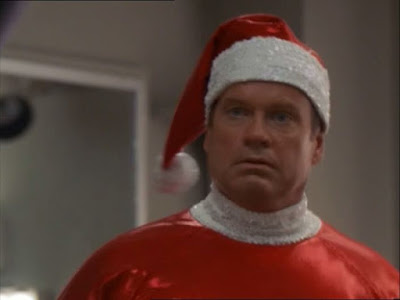 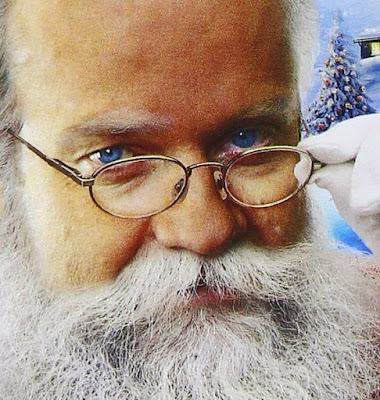 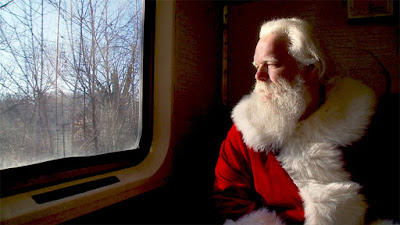 Now let's get serious for a sec. It's been a long time, years, decades even, since I've been moved by a Christmas movie. This documentary on professional Santas is the first time I've "felt something" in this notoriously awful sub-genre. A man finds a picture of his recently deceased father dressed as Santa. Surprised and effected by the image, having no living relatives left, he decides to dedicate his life for the next month and a half to transforming into a professional Santa for a season. He bleaches his hair and beard, goes to Santa school, and has a beautiful red suit made just for him by a talented woman named Adele who owns the coolest costume shop in Hollywood (that I've been fortunate enough to work with!). He soon realizes that he has natural talent for it. He's charismatic and brings to life. The film interviews professional Santas from all walks of life and they all have this little something that's really benevolent and touching. If there's one straight forward Christmas movie I recommend, it's this one. 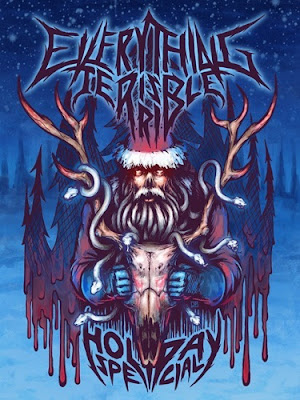 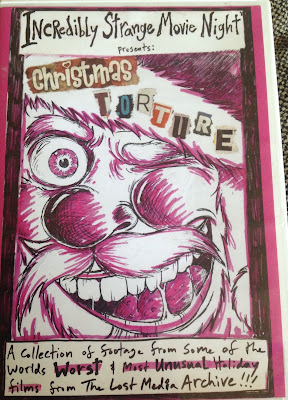 I can't choose between these two! Similar in spirit, Everything is Terrible is know for their amazing mash-ups. Snow dogs, Jingle Cats, aging celebrities and endless hilarity. Christmas Torture, put out by the Lost Media Archive might not be quite as quick and joke-y, but makes up for it in obscurity. With clips from Miss Velma's Christmas Special and the Christmas Martian, it's a real noodle scratcher. Very little overlapping of sources, these two specials are on an equal playing field and both deserve a spot in your holiday rotation. 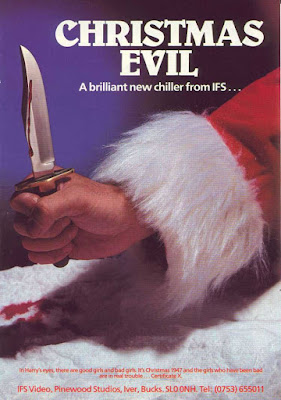 OK Guys, here's the deal. I could have SWORN I had already seen this. I even had it marked as "watched" on letterboxd. But my memory seemed vague, like it had been too long. I was due for a re-visit, and was recently reminded that it's John Waters' favorite Christmas movie so I threw it on as rewatch. I was shocked to learn that I had NEVER seen this movie and had a completely false memory of I guess some other mystery Christmas movie this whole time. Once I absorbed the shock from this revelation, I experienced Christmas Evil for THE FIRST TIME. Killer Santas are a dime a dozen, but this one feels different. I believe it's one of the earliest Killer Santas (the only other that comes to mind is in Tales from the Crypt a solid eight years prior). You might expect something along the lines of Silent Night Deadly Night, and you'd be right in that assumption. A little less slasher-y and transitional but it deals with Santa related childhood trauma. Though, less significantly here he simply sees his Dad dressed up as Santa doing sexy stuff with his Mom, rather than SNDN where the kid sees a Santa murder his whole family. I can't help but wonder about these characters who become killers because of something as simple as seeing adults have sex. Like, get the fuck over it. What unfolds is fairly dark though sensational character study of a man who works at a toy factory transforming into a killer Santa. He watches the children of the neighborhood, makes a list, checks it twice, the whole schitck. This take is a little different, and better than basically all of the ones that came after it. This might be the king of Killer Santa movies. Despite my having a light Christmas horror year, I'm pleased to have finally (actually) added this to the cannon.


That's all folks! I'm a few days late on Part two, so it's now 2016. I hope everyone had a great Holiday, cheers to keeping up with this blog regularly this year!

Posted by Scumbalina at 4:49 PM No comments: