The film opens with a beautiful young woman walking into her apartment and going straight to the kitchen to wash her hair. She puts the shampoo in and starts to lather, she turns on the stove and begins to scrub harder and harder over the fire. We see this all from the burner's point of view. Her hair quickly ignites setting her whole head and face a'flame. An unforgettable opening sequence for any time period. 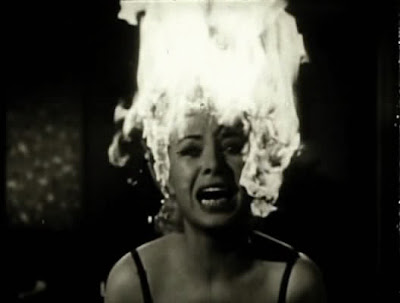 This young woman isn't the first to be found apparently self mutilated. One has washed her face with sulfuric acid, another stuck her face in an electric fan blade. None of the victims remember anything about their accidents. Detective Steve Kennedy thinks the incidents are related and that somehow someone must be influencing them. That same night Steve takes his best girl Marcia and her friend Dodie (played by Merry Anders) to a lounge act featuring a handsome french Hypnotist named Desmond  (Jacques Bergerac, ex-husband of Ginger Rogers). He encourages the audience to participate then calls up the three most beautiful women in the audience, even tells an old lady "no, not you" when she excitedly thought she was chosen. Of the three, the pretty girl he favors goes into a special trance. 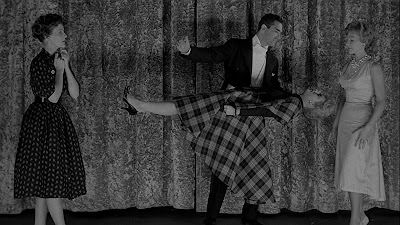 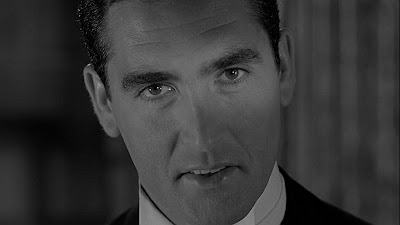 I'm sure you can see where I'm going with this. That night, she'll go home and  be found hideously disfigured the next day. When Dodie becomes the next victim, Marcia gets suspicious. Of course Detective Kennedy has asshole-b-movie-cop-syndrome which makes him obnoxiously skeptical of what's plainly right in front of him. It's not until Marcia uses herself as bait during another show that things begin to add up. She successfully evades the on-stage hypnosis by closing her eyes and pretending to be under his spell. After the show she explains to Detective Kennedy and his Doctor friend (played by Guy Prescott) that he holds a "real eye" in his palm that emits a strange blinking light that lulls you into a deep sleep. She then mentions that his final command is a suggestive whisper in her ear to visit his dressing room after the show around midnight. She's compelled to go so Detective Kennedy and the good doctor decide to follow her and make sure she comes out safely. When Marcia finally does leave she robotically gets into a cab with Desmond, obviously having fallen into the same trap as the other girls. The two follow her on a "date" with the hypnotist. He wines and dines her, they end up at a smokey Beat Club (The Gas House in Venice, California) where we get to see several famous beatniks. Eric "Big Daddy" Nord who was a San Francisco based poet, owner of the famous Gas House and also made appearances in several genre films of the day. The other is Lawrence Lipton who was a famous journalist and also father to James Lipton of Inside the Actors Studio. Marcia has clearly been bewitched by Desmond but it's not until his lovely assistant, Justine played by the magnetic Allison Hayes (shortly after her starring role in Attack of the 50 Foot Woman), is brought into the forefront of this diabolical plot against beauty do the pieces start to fall into place. 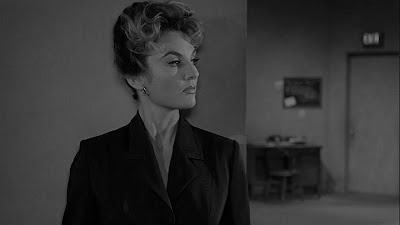 There are a lot of notable aspects of the Hypnotic Eye that make it a quirky and enjoyable addition to the myriad of b-movies coming out during that time period. Two names popped in my head when the story began to unfold, firstly, William Castle. Castle is incontestably the King of Gimmicks. He brilliantly and almost single-handedly created a very special and exciting element of the theatrical experience. Audience participation, most notably with the Tingler's "Percepto!" in which vibrating devices were inserted into the seats so you'd feel a tingling sensation during a climactic scene of the movie. He re-worked the gimmick throughout his career also including props for the audience to incorporate into the experience, such as the "Illusion-O" ghost viewer given out at screenings of 13 Ghosts. It became extremely trendy for a while in the late 50's - late 60's to use such gimmicks. The Hypnotic Eye is certainly one such film. Towards of the end of the movie Desmond would have the audience interact with some simple parlor trick hypnosis. Good clean fun and undoubtedly intended for we, the film audience, to participate in (I'd be lying if I said I didn't try a few). There's even a Hypnotic Eye balloon given out to the audience in the film to use in a particular bit and I'd bet a pretty penny those same balloons were handed out to the film going audience as well. 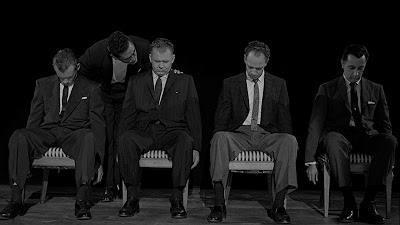 The other name that came to mind was Herschell Gordon Lewis. Why? Because this was OBVIOUSLY an inspiration for the Wizard of Gore. They're almost identical in plot except for the twist at the end of Hypnotic Eye. Wizard of Gore is a mega-cheesey yet straight forward pre-splatter film about a magician who puts female audience members under a trance then butchers her as a shocking "trick" for the crowd. With the wave of a hand she's unharmed only to go home and be found dead in the same fashion in which she was maimed by "Montag the Magnificent". A more gore-centric spin on the same idea, I'd be very surprised if H.G. Lewis wasn't a fan of the Hypnotic Eye. 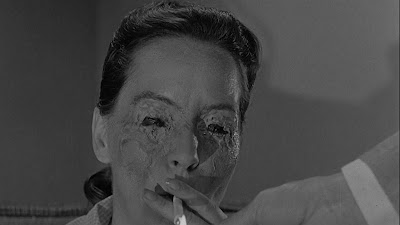 This is a charming lesser known cult movie. Many fans from it's original release say it can't be enjoyed outside of the theatrical setting and although I'm sure it helps, I found it to be a delight even if disgraced by my home video set-up. Problems with the film? Not many. I would have liked a bit more information on the eye itself or the background of the villains. The tie-together is fine but with so much exposition and build up a little bit of back story wouldn't have hurt. Overall there's a lot of fun to be had here. At times it reminded me of some of those wonderful Criterion b-movies that were released a several years ago such as Fiend without a Face. The print looks great, it's nice to see Warner Archive has finally given it a little but of much needed attention. Although those discs can run a bit pricey and be a gamble, I can assure you that if you're a fan of 50's/60's camp the Hypnotic Eye is a fantastic no-filler example of cult cinema at it's finest sure to satisfy your need for the preposterous. 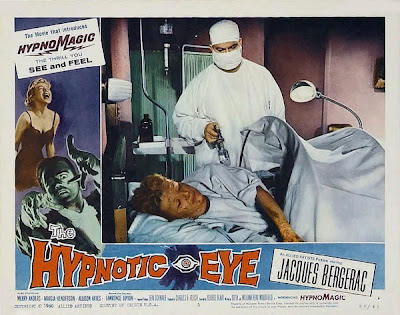 Posted by Scumbalina at 8:20 PM