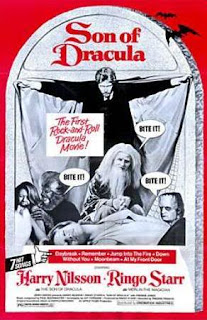 I've been dying to see this for years so it was kind of a big deal to finally receive it yesterday. I'm a HUGE Harry Nilsson fan. Who isn't?! The man was nothing short of genius! He wrote fun, upbeat songs, slow powerful ballads and forever emblazoned himself in pop music history with songs like "Without You" and "Coconut". He even took his awesomeness a step further by scoring some films that would later become cult movies (Skidoo, Popeye and of course the Point which he wrote entirely). His body of work is impressive to say the least. I've always enjoyed the cameos he's made in film and on TV so I was anxious to see "The First Rock-and- Roll Dracula Movie" in which he plays the title character! The first thing I did this morning when I woke up was pop it in the DVD player with child like excitement.

Nilsson wasn't the only driving factor in my interest. It co-starred Ringo Starr who I really enjoy as an actor. After seeing him in my all time favorite Peter Sellers movie, the Magic Christian, I was forever sold on the comedic talents of Ringo. He's a great second banana! Also, it was directed by Academy Awarding winning cinematographer -turned- genre film director, Freddie Francis. Both milestone achievements in my eyes. I was certain I was in for an awesome ride! 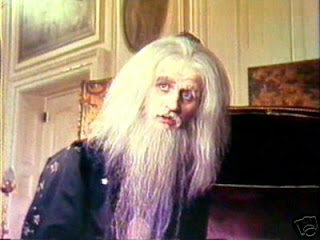 As the "story" unfolded I found myself twiddling my thumbs waiting for my attention to be captivated. You know the feeling. You're really interested in being interested but somehow with certain movies it just never happens. The story was a muddled romantic horror comedy about the Son of Dracula, Nilsson as "Count Downe",  giving up his life as a vampire to be mortal with some lady who didn't do a good job drawing on her eyebrows. They flirt with the idea of a "plot" but sadly this movie was a just a big mis-fire. Nilsson has a few musical moments where he plays piano and sings some of his hits but other than that his character doesn't seem to have much going for him to be the leading man. To be honest, Ringo as Merlin the Magician pretty much carried the whole movie, and it was a small part! Between his bits and Nilsson's singing, the movie was watchable. In retrospect I really wonder where it went astray. With such great house names and the director of such films as Tales from the Crypt (1972), Trog, Day of the Triffids and his masterpiece, Girly. All entertaining horror movies. I can only suspect the problem was with the writing. The story lost me a few times and I'm pretty sure it wasn't too complicated. It just didn't work. Sadness! I really wanted this one to be a winner.
I suppose I'd still recommend it to die-hard Nilsson fans. Or Ringo, or Freddie Francis fans. Not a classic by any means, but it's still captures one of the greatest singer songwriters of the 20th century fumbling through a horror spoof and that I can respect! Of course it's in my trade list for those brave enough to make the leap. I'm glad I finally know what I was missing. Sometimes half the disappointment is just having your fantasy of a perfectly wonderful under appreciated gem being dashed by the reality of mediocrity. Better luck next time!
Posted by Scumbalina at 12:51 AM