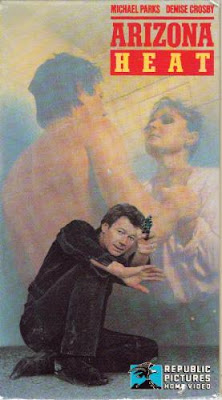 My significant other has a peculiar obsession with Michael Parks. Because of this I've been exposed to more Then Came Bronson then I'd like. On the bright side I've also had the joys of experiencing some of the most hilariously shitty pieces of shitty hilarity ever to grace my VCR. Today's feature, the absolutely craptastic disasterpiece: Arizona Heat.

What in the hell was this filmmaker thinking?? Parks plays a tough cop who doesn't play by the rules (naturally), which is exactly why his chief loves him so much. He gets the job done by any means necessary. So they keep reminding us but in reality what you're seeing is this ASSHOLE go around fucking shit up, screwing any willing participant (including a mother daughter team, G R O S S), getting himself and other cops shot and being a rude insulting prick in the mean time. I promise you, folks, you will have NO empathy for this guy. He's absolutely horrible. Since he's hot tempered the chief decided to pair him up with a sexy lesbian cop played by Denise Crosby. Not realising she's gay he goes out of his way to try and get in her pants by telling her what worthless cop she is. They've been assigned to solve a string of cop killings, the chief thinks that the broad might soften up Parks and curb his violent nature. Not so much. I couldn't help but notice that he does no investigating or "policing" whatsoever. Once he's teamed up with Crosby he just sulks around and puts all his energy into trying to get her in bed. When he finds out that she's a lesbian HOL-Y-SHIT. He throws a bitch fit to end all bitch fits. He goes to the chief OUTRAGED screaming things like "You KNEW she was a dyke when you teamed her up with me!". Completely sincere and never with the slightest sign of remorse. NEVER, not in the end, not after the case is solved and she's saved his ass, not EVER. He continues being a bigoted detestable jerk-off for the duration of this painfully wonderful movie.

Considering it follows the basic cheesy male/female cop team up 80's formula there's the obvious "sexual tension". Which I find to be really absurd. She doesn't hate him nearly enough. At one point he sleeps with her girlfriend, FILMS IT, and when she confronts him about it he tries to rape her in a shower.

This movie is reprehensible garbage and has earned it's way into the bad movie hall of fame in MY HEART! It's tacky, offensive and delivers MANY laugh out loud moments. This, my friends, is the crowning jewel in my Video 98 finds so far.
Posted by Scumbalina at 1:11 PM