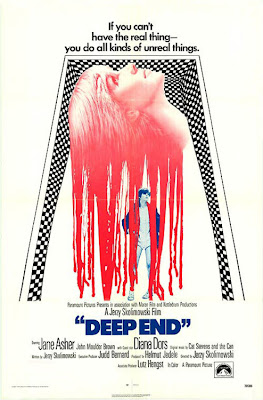 I lost an almost-complete review I wrote for Deep End yesterday, so forgive me if this recap is a bit brief and unenthusiastic. Losing a review is one of my most loathed personal fuck ups. The second one is NEVER as good. So...enjoy :-(

I'd been wanting to see Deep End for quite some time. After years of it remaining on my ever growing wish list, I finally obtained a copy of this unreleased (in the states) rarity. The story follows a teenage boy named Mike who gets his first job at a bath house. At that time in London many people still didn't have bathtubs in their homes so it was still fairly common to have a membership to a public facility. Mike is shown the ropes by his co-worker Susan, played by the lovely Jane Asher. She explains to him that many of the customers have special "requests", and that if he goes along with it he'll be tipped handsomely. The most amusing of these events is when actress Diana Dors mauls him into submission while describing a football game. Mike is uncomfortable with the whole scenario, and appears sexually confused through out the whole movie. Susan is a sexually liberal young lady who enjoys the attention from just about anyone she can get it from. There are the patrons of the bath house, her apparently wealthy fiance and of course Mike who she's stringing along for the ride. He begins to develop feelings for Susan, who's ten years his senior. Although it's clear to the audience that her motives are selfish, Mike convinces himself that they're meant to be together turning an innocent crush into a dangerous obsession.

My biggest problem with the film was it's pacing. I can see that it's supposed to be a slow burn but the mid-section seems to drag out with an unnecessary amount of  filler. During one long stretch of the film Mike is wandering around the city looking for Susan. He appears to be lost, ends up in night clubs, strip joints, peep shows and even a prostitutes den. I get that this angle was meant to express his hormonal agitation, which eventually leads to the infamously explosive ending, but this sequence ended up eating into about 1/4 of the film's total length which struck me as a bit of a waste of time when the point was clearly taken.

I may have had the bar of expectations raised a bit too high based on my years of anticipation. Also, for whatever reason, I was expecting it to be similar to Twisted Nerve. The two films have a lot in common on paper. The basic premise of a disturbed young man obsessed with a girl, both made around the same time, both British psychological thrillers. Although this conjecture was completely self imagined, Deep End didn't meet those standards. For a sexy thriller I expected more sex and thrills.

In Deep End's favor I will say that the ending does not disappoint. Although over all the film may have fallen a little flat for my taste, it's tied up beautifully in the last ten minutes making for a well executed and cataclysmic conclusion. Also, the music is nice. CAN did the score and Cat Stevens does the opening and closing credits. That makes any film OK in my book.

I wouldn't recommend it to just any cinematic pedestrian, fans of British horror and mod cinema will probably have the most to gain. Also, if you have a region free player the restored version is apparently stunning. With that said, despite my ambivalence I'm glad I finally saw Deep End. It may not be making any top lists of mine any time soon but it's not without it's charms. 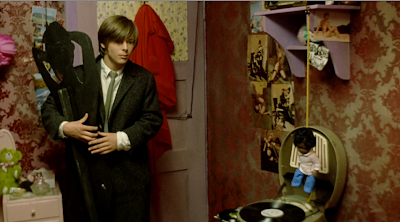 I loved the look of the prostitute's room. She and I have very similar taste :-)
Posted by Scumbalina at 2:54 PM