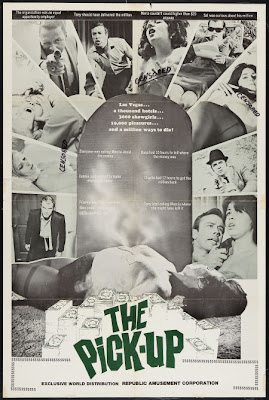 I had no idea what to expect from The Pick-Up. Based on the rest of the festival I anticipated plenty of sex and violence, and I wasn't far off. What I wasn't expecting was a respectable post-noir movie reminiscent of gritty Euro-crime cinema. The story follows two mob couriers who make a pick-up of a large amount of money in Vegas and are instructed to drive it back to their boss in Los Angeles. Along the way they see two attractive girls stranded on the side of the road with car trouble. The smarter of the two, Tony, wants to press on because he understands the gravity of the situation. The rookie, Frankie, has a one track mind so he insists that they turn around and go help the girls. Frankie ultimately gets his way so they end up giving the girls a ride. This is when we're reminded that it's still a David F. Friedman movie, Frankie and the cuter of the two girls start to get it on in the backseat making for a very awkward moment in the front seat. That is until they stop at an auto shop where the front seat girl goes in and claims their car will be towed there within the next few hours. What better opportunity to go get a motel room and fuck total strangers, right? The whole thing stinks to high heaven and I can't believe these poor saps are fell for it. So they go, they get separate rooms and they start to go at it. Sure enough, the girls have guns, the guys get tied to the bed so they make off with the car AND the money. The guys are in deep shit. 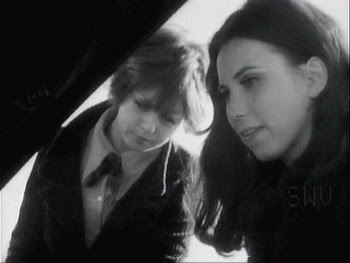 From there the story goes on to show the guys in a frenzy trying to catch up with the thieving ladies because if they can't get the money back, they'll surely be killed. It would have been a much better movie without all the gross sex, and I really just mean naked David F. Friedman in an awkward sex scene I'll not soon forget. Director Lee Frost is responsible for such b-movie fodder as The Thing With Two Heads, Love Camp 7, Mondo Bizarro, Black Gestapo and the Defilers. His team up with Friedman who has formerly been his rival, was a match made in some kind of softcore nipple electrocuting heaven.

Mike Vraney, owner and founder of Something Weird Video told a great story about his hunt for The Pick-Up. Friedman considered it the Holy Grail of his lost roughies. As far as he knew there were no existing prints in the world. Vraney, who is a real cinematic archeologist made it a personal goal to track it down. After decades of hunting he finally found a print in a vault in Copenhagen Denmark. The print he discovered that day is the one readily available on DVD-R in the Something Weird catalog in English with Danish subtitles. It's also the print we were shown for the event. In my research I cam across the Swedish title, "Den vilda jakten på nakenbrudarna" , which hilariously translates to "Romancing the Naked Chicks". 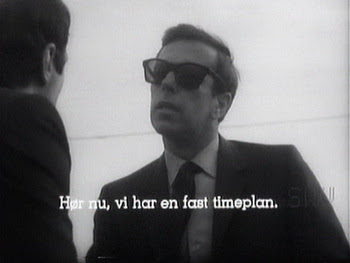 After sitting for hours in the theater absorbing everything that was being thrown at me it was nice to take a step back and watch a solid suspense film. The Pick-Up is perhaps not for everyone's taste but worth a look for connoisseurs of cult crime anti-classics, Something Weirdos, and David F. Friedman fans alike.
Posted by Scumbalina at 12:54 PM