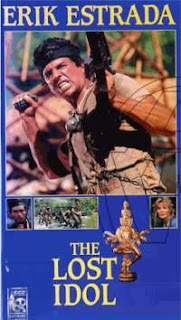 Isn't is sad when a curiosity you've had about a movie for years is snuffed out anti-climatically by disappointment? I actually bought this movie for an Ex years ago. It was kind of a gag gift. I don't exactly remember the circumstances around it's discovery but I was spending a lot of time on Amazon searching for cheap used videos with awesome covers. I made some interesting discoveries during this period. I never got around to seeing it before we broke up and have often wondered what sort of bedlam Mr. Erik Estrada had in store for me. I swear to God, I hadn't thought about this movie in years until last night! After I watched Virgins from Hell, suddenly I remembered this and yearned to see it post-haste. I even thought about ordering another used copy on Amazon. Little did I know that the next freaking day I'd be watching it!

Thanks to Video 98, my itch was scratched... although I think it might scab up a little. Some satisfaction occurred. What we have here is a half baked Vietnam/Golden idol heist movie with an uninteresting storyline and not-funny bad acting with so-so violence. There's really not much to say about the Lost Idol and that deeply saddens me. Between the inside joke revolving around how ridiculous it looks, thinking about it last night and actually FINDING it today, the actual watching of the movie was the least exciting part. Perhaps if I'd been in a crowd and imbibements were involved? I'm also a bit disenchanted because this is a Thai produced movie and with that in mind I expected MUCH more madness! This is a movie that SHOULD be sensational garbage but what it really does is stagnate between "mediocre" and "boring".