I'm starting to get back into the swing of things. I got a job, I feel like the madness of our life changing move is finally settling down. I'm finding myself back in a routine which is giving me the right state of mind for movie viewing. I mentioned in my last review that I came across a wonderful video store in South Pasadena called Videotheque. It's an all meat no filler kind of place. It ranges from an assortment of some of the greatest movies ever made to some of the weirdest movies ever made and in turn some of the most rare movies ever made. They carry a lot of films put out by 5 Minutes To Live (now known as Cinestrike). I've spent the last five years or so slowly building up a nice little 5mtl hoard but there's still so much more to be discovered and at $15 a pop (plus $6 for shipping) it can be a pricey hobby. And let's face it, collecting movies such as those sold on 5mtl and in my own online shop (I admittedly sell movies I dislike) can be hit or miss. The option to rent is a lifesaver! On that note, I was particularly enthralled to see that they carried what was going to be my next purchase from "Cinestrike" (still can't get used to calling them that). The 1968 Japanese film Big Commotion (Nippon oyafukô jidai)...

The major selling point on this one is that it stars my FAVORITE Japanese group, the Spiders, whose cd I bought on a whim a few years ago based on the incredible cover and have since played it out. They've been compared to a lot of bands, the Beatles, the Electric Prunes, the Ventures and the Monkees (the latter I think is most accurate). Really though, they're a superb rock n' roll group who has a distinct flavor of their own. It wasn't uncommon for them to open for the Beach Boys in Japan. I dare say their sound is in that vein as well, during the Pet Sound years. I could really gush over this group. They're wonderful and if you're unfamiliar I give them my utmost recommendation.

For some reason I thought this one had subtitles but unfortunately it didn't and as far as I know there isn't a copy floating around that does. I was a bit disappointed at first because there does seem to be a plot and I was having a hard time following it, but after a while you get the gist of what's going and I was able to engage myself in the comedic antics. The underlying storyline I seemed to notice revolved around the the lead singer, Masaaki Sakai who was lovesick over a girl and often slipped into fantasy sequences in which he makes a ridiculous cross-eyed face prior to. I found his role in the movie to be completely adorable! His animated features and movement made this movie a lot more watchable. I later realized that he's the main character on the show Monkey Magic! Which I believe was mostly directed by Jun Fukuda.

Aside from him, the rest of the band (there are seven total) seemed be the foils for his shenanigans. I read that this was Japan's answer to the Beatle's Help! but it struck me a lot more like an extended episode of the Monkees television show with Masaaki as the Peter Tork character. Aside from all of that, I still was a bit lost with the story but the other selling point were the awesome live performances and music videos. I'm surprised none of that footage has made it to youtube (unfortunately I don't know how to do any of that or I'd upload them myself). In fact, I'm disapointed that there aren't any decent clips of the Spiders at all other than a 1981 reunion where they cover Day Tripper, which I wouldn't say is one of their finest moments. I was thrilled to hear (and see) all of my favorite songs including Kaze Ga Naiteriru, which has made countless mixes.

All in all, worth a view for serious fans of the Spiders or the Japanese GS movement of the 60's. I was hoping for a bit more psychedelia to get me through the subtitle-less-ness but considering this movie is over two hours I would say it held my attention pretty well. At very least check out their music. You can get the cd used on Amazon for around $10. WELL WORTH IT. 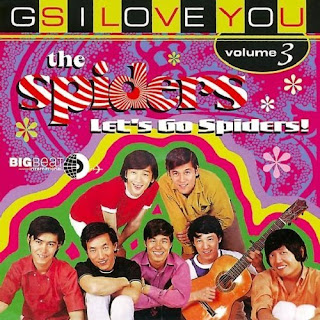 I'm back again! This time hopefully for good. Just as suspected, everything fell into place right befre the move. We had a delightful cross country trip. Including a tourist-y afternoon spent in Tombstone. It was still fun for me because before that day I'd never even seen the desert in person. We arrived two weeks ago and things have been crazy-hectic ever since. Between family events, filling out applications, going to interviews and re-familiarizing ourself with the area it seems like we've barely had a moment's rest. Unfortunately almost all of my movies are packed up in the storage shed so our viewing options are very limited. We've bought a few movies but even still haven't had much time or space to watch them. Our living area is really small and cluttered right now so even when we have had the time it hasn't been very comfortable and cohesive for a proper viewing experience. Alas, one of the best things about living in LA are the amazing theaters. My favorite is of course, the New Beverly. The only note worthy movie experience I've had (other than discovering an incredibly hip rental place called Videotheque in South Pasadena which I'll be touching upon more in the future) was finally seeing the much anticipated Gone with the Pope. 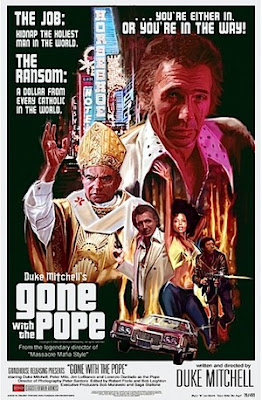 Director and star Duke Mitchell was best known for his Dean Martin impersonations, particularly in his role in Bela Lugosi meets the Brooklyn Gorilla. He went on to make the cult classic Massacre Mafia Style. Gone with the Pope was intended to be the sequel, which I wasn't aware of until after I saw it. Although it didn't prevent me from thoroughly enjoying and following along fairly easy anyway. This was considered Mitchell's lost masterpiece. Scraping pennies and filming it on weekends when he could get the money, cast and crew together he filmed most of it in pieces over the course of five years. Over time the project was abandoned. In 1981 Mitchell died leaving Gone with the Pope unfinished to collect dust in his son's garage. In 2009 Grindhouse releasing were offered the opportunity to assemble the piece to make it a coherent film. Bob Murawski ( who was there to introduce the movie the night I saw it) made it his pet project in between his bigger jobs ( Drag Me To Hell, Spiderman 1,2 & 3 and the Hurt Locker, ).The end result is a hilariously offensive cult film on par with the work of the Kuchar Brothers. 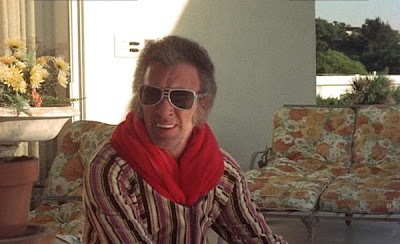 The story revolves around Paul (Duke Mitchell) a hitman who's recently been released from prison. He's hired for a new job and recruits a goofy lopsided hispanic with a unsettling grin to assist him. After collecting payment we see a montage of him and his girlfriend playing and having fun. So absurdly over the top, it had the entire audience in hysterics. 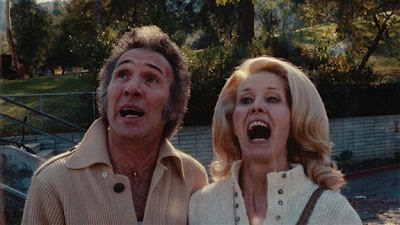 He gets his group of buddies together and he cooks up a scheme to sail from California to Rome, Italy so they can kidnap the Pope for a ransom of one dollar from every Catholic in the world. A great plot if you ask me and even in it's flaws it's the small details that make this movie so perfect. The almost homo-erotic "buddy" scenes, Paul throwing his friend's necklace in the ocean for no reason at all and maybe best of all, the off-putting John Water's-esque "sex"(?) scene with a random obese woman he finds on the street. People who take movies too seriously might not see the genius of Gone with the Pope but those with a love for all things campy and high tolerance for sexist, racist and generally offensive dialogue will be dying of laughter at this resurfaced gem.

As of now it's still touring select cities. It will no doubt be getting a DVD release in the near future so if you miss out on the screenings keep your eyes peeled, here's the link to the official website.


So am I back for good? For the most part. Like I said, my movies are still packed and until all of the kinks are ironed out of the arrival (for instance, being on shared computer) my reviews may still be a bit sparse. However I am certainly in the right place to continue my hunt for the weirdest and wildest movies around so don't be discouraged if my blog updates are still somewhat sparse. I'm making a comeback and it will be more awesome than ever so stay tuned!
Posted by Scumbalina at 2:57 PM 1 comment: