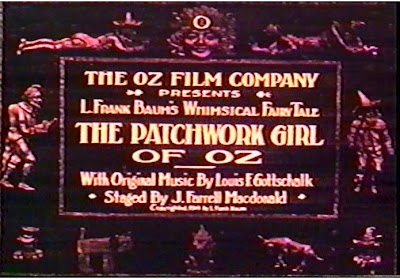 I was never a huge fan of of the 1939 classic, the Wizard of Oz. It's a fine film but it never spoke to me. The music gets on my nerves and so does Judy Garland. I'd take take Walter Murch's Return to Oz (1985) over what I once thought was the original any day. It has a darkness, mystery and realism that I live for from a fantasy film, and given the Jim Henson touch of genius, ahhh ...nothing compares. As I said, there was a time I mistakenly thought that The Wizard of Oz was the first adaptation, then somehow over the years I heard about the silent versions. I thought they sounded neat in passing but really didn't give it another thought. When I came across the 1914 Patchwork Girl of Oz recently I couldn't help but wonder how it was. Such an interesting title. I only read one book, the Wizard of Oz, when I was a kid. I wasn't even aware that there were FOURTEEN books in the series. Meaning, I didn't even know that this story existed. On top of that I couldn't help but wonder what a children's movie looked like 1914. I'm not sure what I expected, but I didn't expect this. 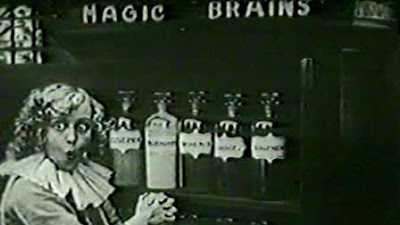 There's no Dorothy here. Which is a relief. I always thought the character was kind of a dork. Who the hell would want to go back to fucking Kansas after being in the magical land of Oz? The story revolves around Ojo, a "munchkin boy" , who just happens to look like a beautiful shapely girl and her his "Unc Nunkie" (try saying that out loud, it's embarrassing) run out of food from their Bread-Tree so they decided to make a trip to the Emerald City. Along the way they find themselves at a magicians house where he's been mixing a powder of life for 6 years. 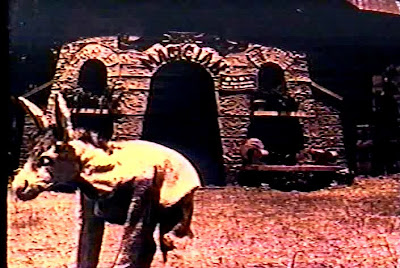 His wife who is tired of doing all of the chores, decides to make herself a slave girl out out of quilt  "Scraps" (which becomes the Patchwork Girl's name). Ojo is put in charge of mixing the "brains" and makes the mistake of giving her too much of everything, giving her a very spirited personality. As soon as Scraps comes to life she's a nimble acrobatic mess! Flipping around like a nut, she knocks over "liquid petrification" on the Unc Nunkie, the magician's wife and his daughter's boyfriend, Danx. Knowing that he couldn't possibly mix another powder of life for another six years the magician he lists some elaborate ingredients for a quick fix that Ojo and his daughter Jesseva must fetch. The ingredients include...

So begins Ojo and Jesseva's journey, accompanied of course by Scraps. 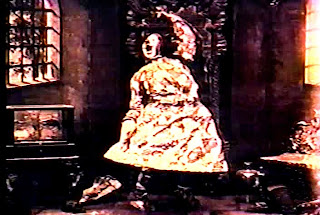 My initial thought when this movie was underway was how totally ugly and weird the Patchwork Girl looked. For starters, it's obviously a man playing her. That's right, Patchy Scraps is a drag queen. Girls don't have shoulders like that and that dress did nothing for his figure. In fact, the costume made him look more hulking and broad, like it was made out of an oilcloth tarp. His face looked like something from horror movie. With sparse stringy yarn hair he looked like a scalped Leatherface clown. Not at all cute as the quaint title would have you believe. I expected a ragamuffin and I got some creephole that looks like he's in Slipknot or something. Not to say that any of that affected my opinion of the movie. After adjusting to the expectations-not-met I was able to appreciate this bizarre rendition of what was surely intended to be a funny character. I later found out that Scraps was played by the male acrobat Pierre Couderc. "Due to social restrictions" a female acrobat wasn't an option. 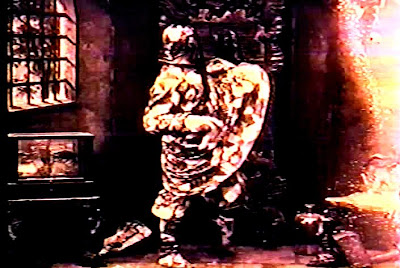 They first come across the Woozy. Scraps agrees to try and convince the Woozy to give them three hairs from his tail. They end up up dancing together and the Woozy decides to just come along on their journey. I liked the simplicity of this boxy cat. It looked like a cat costume made by a couple of kids. Despite it being so unconvincing, I found it really charming. It's awkwardness won me over. 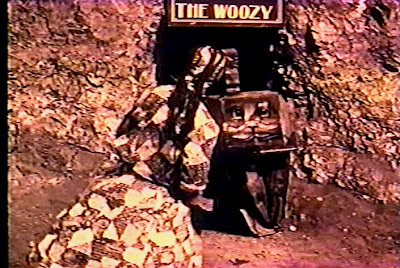 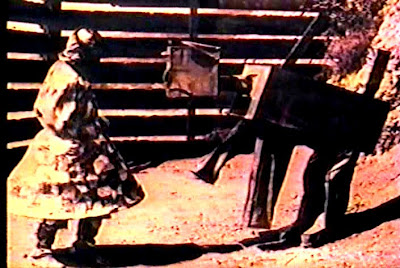 My favorite creature in the movie was the strange oriental monkey , the Lonesome Zoop. After having just watched Hanuman vs. the 7 Ultramans I couldn't help but view this unintentionally frightening beast as something to be avoided...and admired. 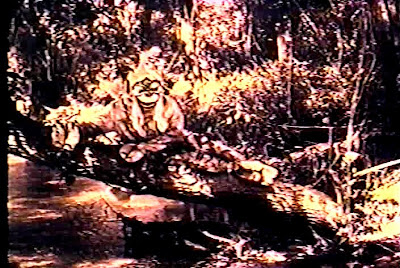 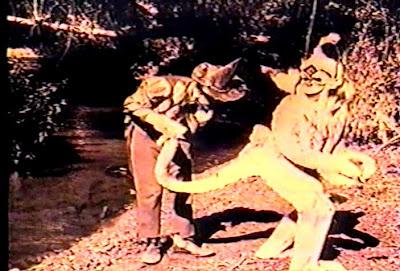 We run into lots of strange animals and people. One legged "Hoppers", the black faced "Jolly Hottentots" and the weird wizard looking "Horners". We briefly get to see the Tin Woodsman and the Cowardly Lion. Throughout the movie I noticed similarities in Scraps behavior and appearance to the Scarecrow and even thought "they'd make a cute couple", and wouldn't ya know it... 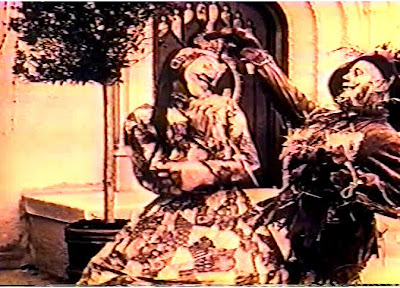 I did a little research on the history of this film and the Oz Film Manufacturing Company. This was the first of three OZ films to come out in 1914. After this came the Magic Cloak of Oz and His Majesty the Scarecrow of Oz. L. Frank Baum wrote and produced them. This was the most recent of his books published so it made sense to market on that and make it the first film. All three were box office failures. Although often critically acclaimed, after a while having the word "Oz" in a title was considered box office poison. Shortly after the Oz Film Manufacturing Company disbanded Baum's health started to decline. Decades would passed before approaching the fantasy series again would even be considered.

In a way I understand how this movie might not have been successful. At the time most of what was coming were violent westerns. This movie was considered juvenile and it's easy to see how 96 years ago this might seem a little hokey. Viewing it with a pair of 21st century eyes makes the experience a bit more puzzling. The incredible amount of care to make this movie fun is impressive in it's own right. My print has strange music playing as well. Every five minutes or so it would change from your standard piano roll, to ethereal meditation music to this synthesized Ryuichi Sakamoto sounding track. Oddly enough, each tracked worked for the movie in different ways. After it was over it stuck with me for the rest of the night. It was unlike any silent film I've seen to date. The mis-fired gender-bending fantasy elements made the movie feel like it was taking place in another dimension, which I guess is kind of the point! The Oz Film Manufacturing Company's version of "Oz" is completely gonzo! Which leads me to believe that L. Frank Baum must have been a little gonzo, and that makes my heart smile. 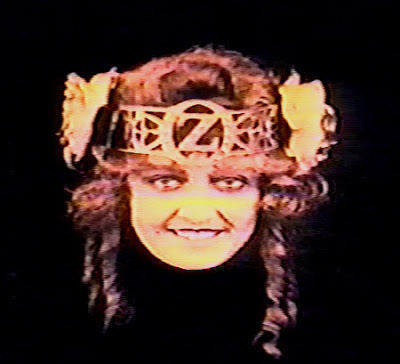 Despite it's lack of success, the Patchwork Girl of Oz is an eccentric little piece of  forgotten film history. Imagine if it had been successful? The 1939 classic that some consider the greatest movie of all time would probably never have been made. The Oz Film Manufacturing Company would have continued and the series would have gone in a completely different direction. It's an entertaining thought but as it is, the Patchwork Girl of Oz and it's OFMC successors will probably remain in the annals of a used video store's budget bin, only occasional dusted off to be enjoyed by a curious passer-by. 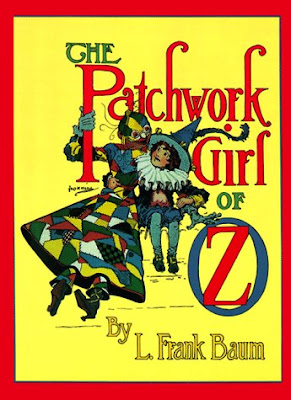