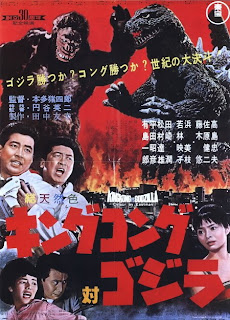 I only recently started seriously watching Godzilla and other Kaiju Eiga movies.  Most fans seem to have had an early start at childhood. I didn't even see the Gojira (1954) until I was well into my teens. It would be another  five or six years that my fascination with Mothra would lead to my making a conscious effort to dive into the series. My enthusiasm for the genre blossomed and I've spent the past two years devloping a moderate obsession with Toho, Daiei and whatever other giant monster happened my way . I'm still not an aficionado but it's been a hell of a lot of fun experiencing the magic through fresh adult eyes.

I'm starting with this one only because it's the most recent I've seen. I'd put it off because I'm very particular about monkey costumes in movies. I hate a bad monkey suit, and almost all of them are! To be honest I usually stray away from gorilla/large ape movies in general. Despite the genius that is Eiji Tsuburaya and Ishiro Honda, there wasn't much that could save that King Kong suit. The rest of the film's special effects are fantastic. They were working on half the budget as they were used to but still managed to make an awesome monster flick. The end is especially awesome when Godzilla and King Kong are destroying the temple. They topple off of a cliff into the ocean which creates a tsunami that demolishes a nearby village. This sequence looked incredible even on the crappy "Good Times" full frame VHS movie. There's been debate over who was triumphant in the end. I watched the American version, they make it clear that King Kong wins. I'd heard that in the Japanese version Godzilla wins, but after doing some research I found out that Toho declared that it was always intended for King Kong to be the winner. He was still much more popular at the time and seemed like the obvious choice. 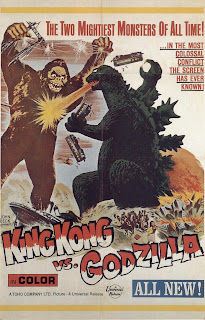 This movie would start the trend of light hearted Godzilla movies. In Gojira and Godzilla Raids Again (1955) he's much more frightening looking. King Kong Vs. Godzilla ia also the first one in color. Originally the Godzilla suit was brown looking like a charcoal grey on black and white film. In King Kong Vs. Godzilla they decided to make him green, he has three toes instead of four and his pupils are larger. The 1962 Godzilla is much more cartoonish and "cute", and so he would remain for the next twenty years or so.


Overall a good solid Kaiju Eiga movie that would set the standards for the camp classics I love!

Posted by Scumbalina at 5:52 PM