A while back I came across this glorious photo of the lovely Shirley MacLaine donning pink from head toe. Perfectly coifed with the most beautiful cotton candy pink hair I've ever seen. I had totally forgotten how badly I wanted to see "What a Way to Go!" until earlier this year I was doing some research on Edith Head for work. I wasn't previously aware that she designed all of the Miss MacLaine's gowns for the film. This skyrocketed it from moderate to high priority.

This cute and stylish big production was originally going to be a vehicle for Marilyn Monroe (which I could totally see) but since she died and untimely death, Shirley Maclaine landed the roll. To be honest, overall the plot isn't very strong and after a while becomes a bit repetitive. The character wants a humble, modest existence but every time she marries a decent guy, he becomes greedy and rich which eventually leads to his demise. Quirky concept but the film is carried by gorgeous art direction, sensational costumes and the adorableness of Shirley.


This is more of a showcase than an actual review, because the design is BANANAS and needs to be admired forever.... 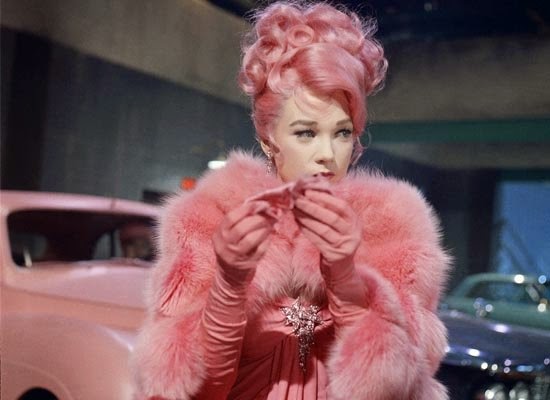 Probably in my top 10 favorite "looks" in cinema ever. 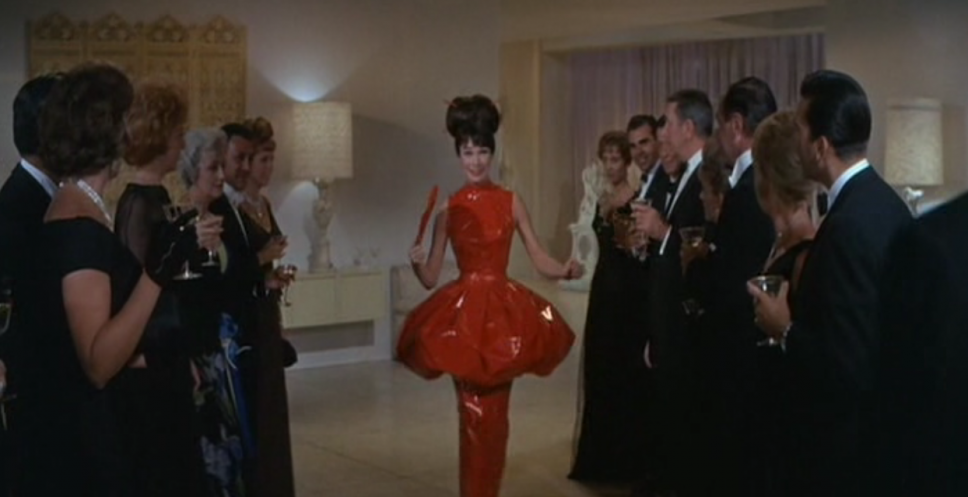 This mourning widow look made me LOL

I wish I had gotten a picture of the back of this bikini. She stands out beautifully against the amazing pink mansion.

It's so Jayne Mansfield, I can barely take it.

It's almost like a Frank Tashlin film. So fucking LUSH!

The Breakfast at Tiffany's look only better. 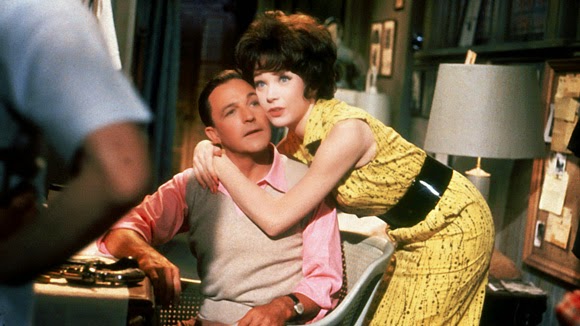 Yellow and Black speckled dress with a giant belt. I would wear this today. Like, right now.

This olive green skirt suit is gorgeous. I love the collar and the absurd pearls.

She has so many looks I barely remember this one in the movie but it's sweet!

Such amazing use of solids.

Another one of my favorite "casual" looks. Oversized pea green turtleneck sweater. I want it.


I'm pretty sure I missed some but that's what I was able to salvage in a hurry. I think I'll make this a regular thing. Focusing on the design of visually pleasing films. Cool! 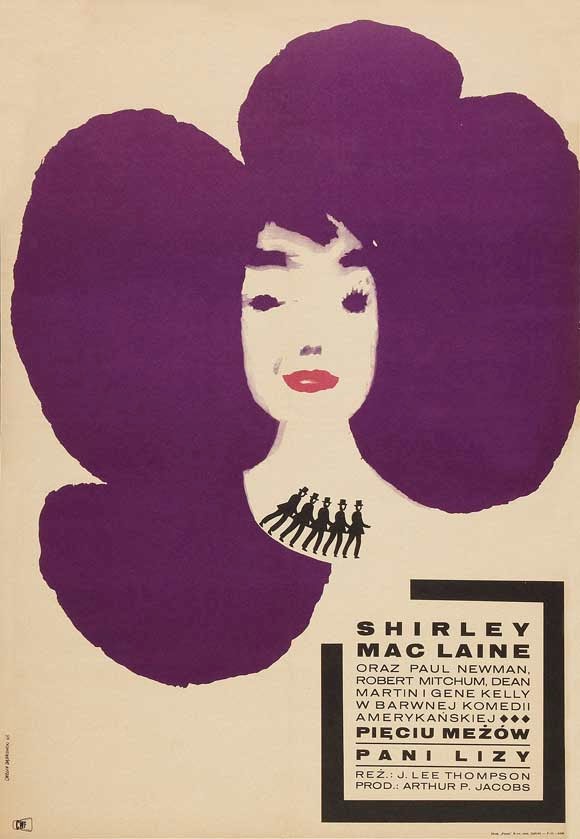 Occasionally I stumble upon a movie that's so good, I can barely stand it. I have to periodically pause it and walk away so that everything I've seen so far can sink in. It's literally like a form of cinema induced paralysis where I'm literally awestruck. It's getting exactly what you want that didn't even realize you wanted. It's seeing all the qualities of a favorite film seemingly tailored for your own bad taste come together harmoniously in ways you couldn't have imagined. The Ginseng King is one such film. 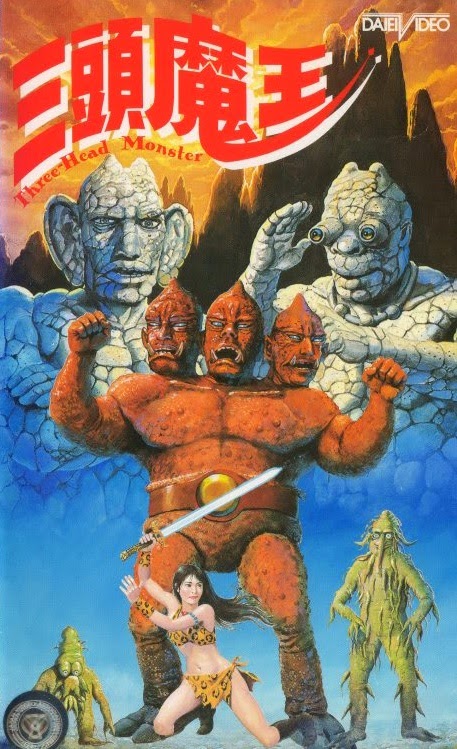 A boy foraging for roots and herbs in the forest stumbles upon a tiny living ginseng root. Legend has it that if you eat the root of a "wiggling" ginseng, you'll live a long and healthy life. Since this is a living, breathing, talking creature, it obviously doesn't want to be eaten, so it runs away from the boy. He chases the baby ginseng through the forest, it hops into a tree, the boy follows and gets bit by a poisonous snake who's hiding out in the tree. He falls and hits the ground writhing in pain. Realizing that the boy will die if he doesn't intervene, the baby ginseng root hovers over the him releasing some kind of mystic ginseng smoke. He announces that the wound is too bad and that the only way to save the boy is to call upon his ancestor, the 1000 year old Ginseng King. 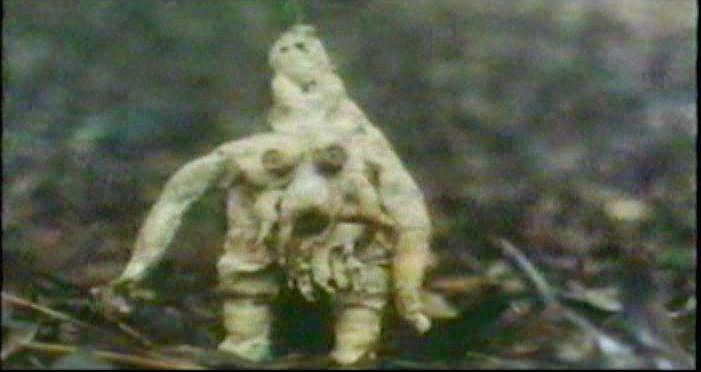 From the shadows ascends our hero, the Ginseng King. As he approaches you realize it's either a midget or a child in a suit. Literally an anthropomorphic ginseng suit. What would a ginseng root look like personified? Lumpy, beige, stringy in places, knobby with big ol' bug eyes like Marty Feldman. The ugliest thing I've ever seen AND the cutest thing I've ever seen. He comes to the boy, breathes his magical ginseng smoke over him, then blows some in his mouth bordering on awkward/inappropriate. The boy wakes up just long enough to catch a glimpse of his saviour, then the Ginseng King disappears into the night. The boy's health is restored and he goes home. 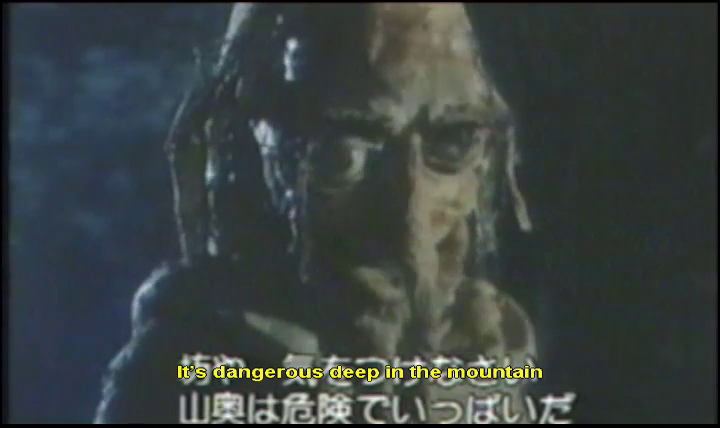 Now the Ginseng King is wandering through the forest and he's suddenly being hunted by these goon-faced ninja guys. They're chasing him because, if a tiny little baby ginseng has these astonishing powers of longevity, a one thousand year old human sized ginseng must be bursting with magical properties. In fact, rumor has it, the 1000 year old ginseng can even RAISE THE DEAD.

While running from the goons he encounters a young woman who appears to be a in peril. Fleeing from the same guys I suspect, so they stick together and continue their escape. It seems as though they are safe and then the girl reveals her villainous intentions, she's with the goon-dudes and it was a trick! She grabs him and he uses his magical ginseng power to electrocute her with video toaster laser lightning! She propels back, he shoots into the air like the magical ginseng man that he is and starts aimlessly flying around like a deflating balloon. In his flight, he loses a single whisker. It falls on a grave, and you remember what I told you about the Ginseng King's power of resurrection, right? 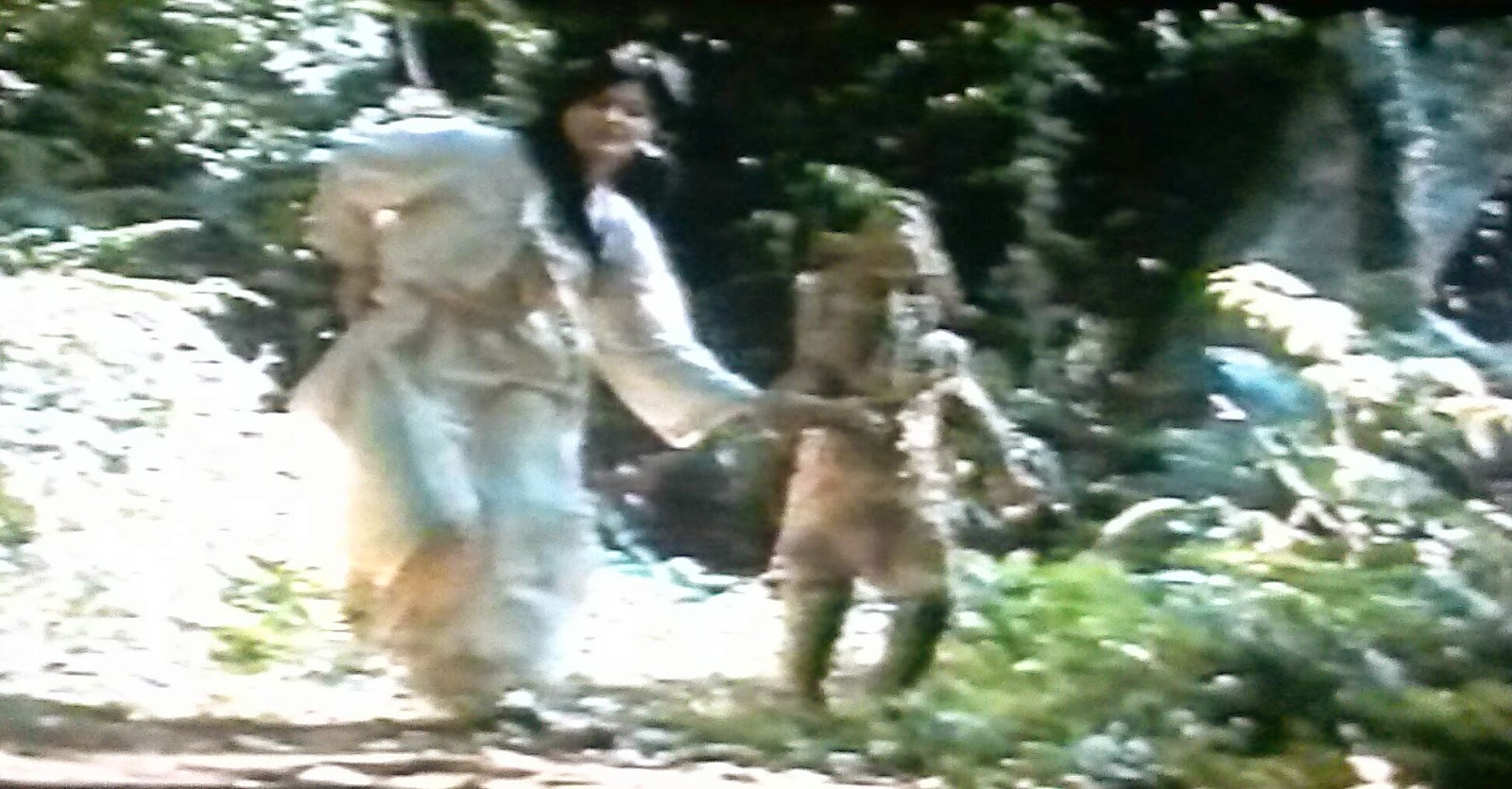 
Cut back to the boy's hut. His mother is ill and you realize that's why he was trying to capture the wiggling baby ginseng. He's nursing his poor mother back to health. He didn't find much but he makes her some herbal tea from what he was able to acquire. He tries to tell her about the 1000 year old Ginseng King, but she shrugs it off as his childish musings. Suddenly in bursts a ZOMBIE. A pretty large and intimidating zombie. This guy's no joke. He chases the mother and son through the hut, fucking shit up, destroying their home. Sharing a noticeable likeness to a Hong Kong Jiangshi (Hopping vampire), vaguely reminiscent of scenes from Encounters of a Spooky Kind or Mr. Vampire. They run up into the loft and he's so large he breaks the ladder while attempting to go after them. He shakes the load bearing pillars supporting the loft. He's going to bring the whole house down! The mother reminds the boy that the Monk on mountain may be their only hope. He leaps right over the zombie-vampire and bolts for help. 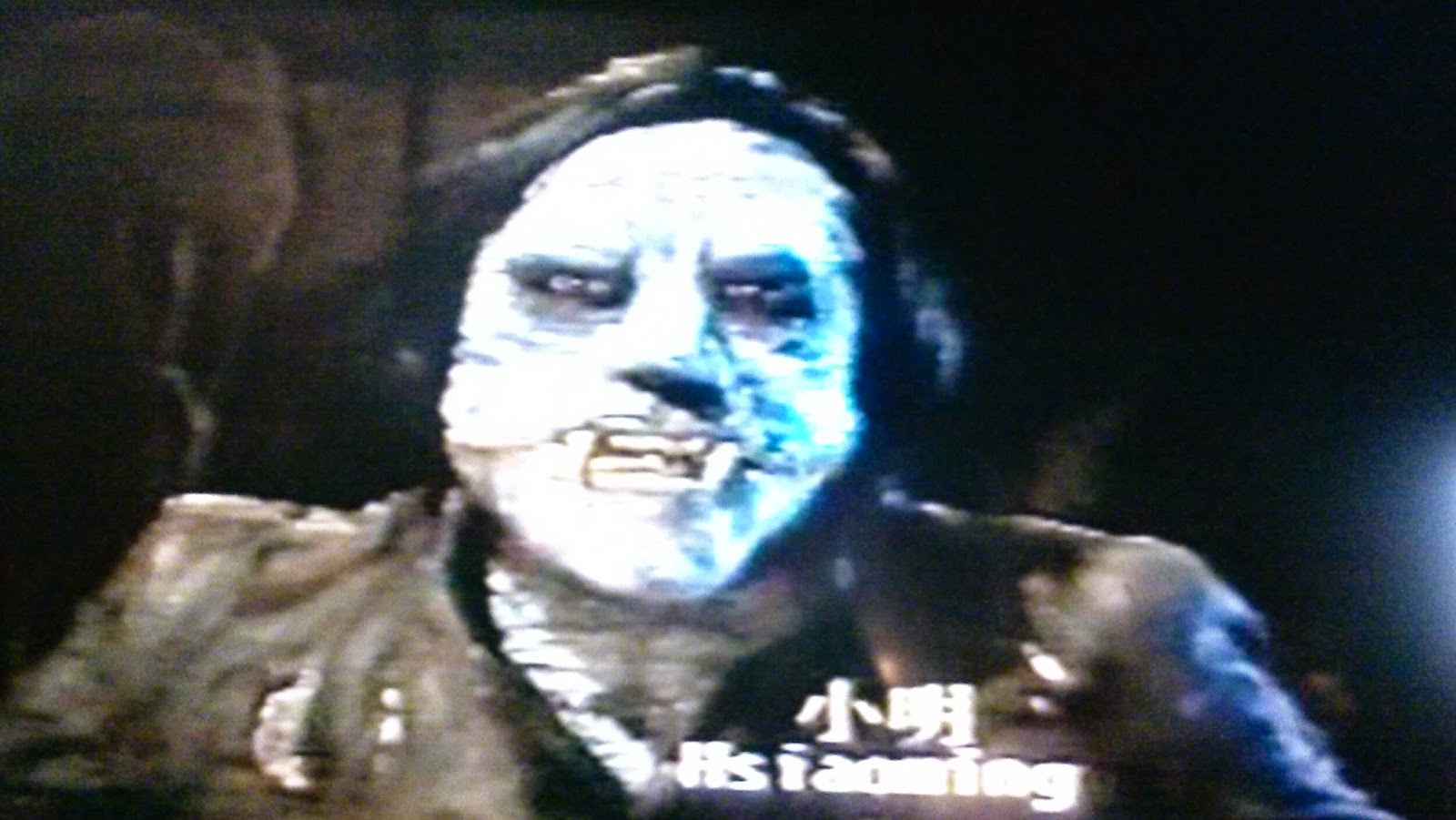 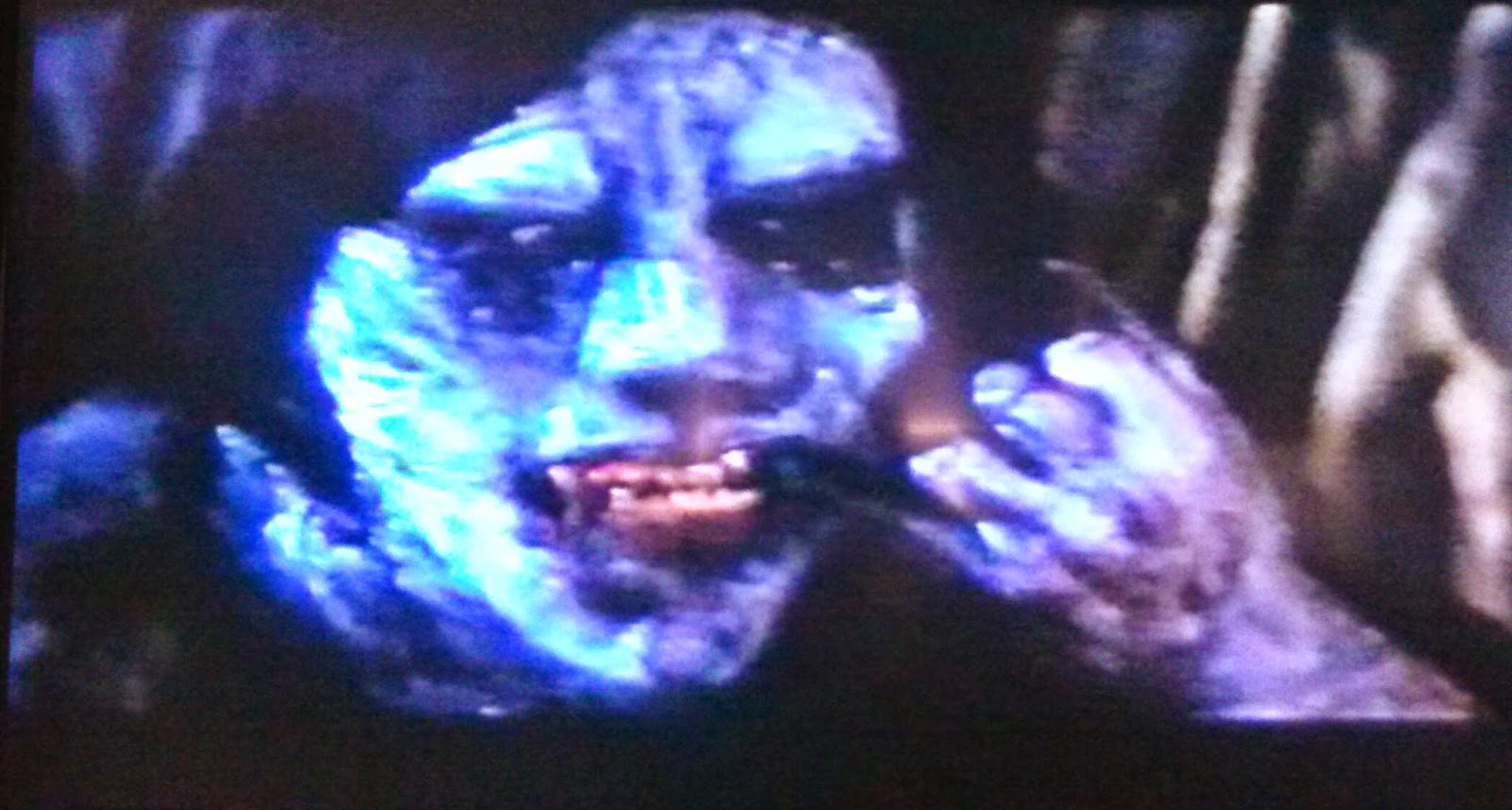 When he returns with the Monk, the house is destroyed, the zombie-vampire is gone and the mother is laying idly having been drained of most of her blood. Barely alive, the Monk is skeptical of whether or not he can help her. The boy tells him about the 1000 year old Ginseng King hoping it will inspire optimism. The Monk dismisses it saying that that the herbal deity is just a legend. While the Monk is attempting to restore the mother's health, the zombie returns! Chaos momentarily ensues until the creature abruptly stops to "salute" the Monk. Everyone pauses in confusion, but this wasn't an ordinary salute it was more like a "sieg heil". I thought, surely that didn't happen. I noticed the opposite facing swastika (symbol of well-being) on the Monk's sash and thought "I MUST  be projecting this, SURELY". Then it it happened AGAIN and the Monk takes notice. He realizes that the swastika is controlling the zombie and while it's never directly stated he mentions that the creature is clearly "foreign", he knows because he's wearing a uniform. Then he touches the band on his arm. So yes, there is indeed a NAZI ZOMBIE in this Taiwanese fantasy flick about living flying Ginseng gods. Yes. It happened, it exists. We can all go home now. The greatest movie ever made has been discovered. I'm shutting the blog down. GOODBYE. 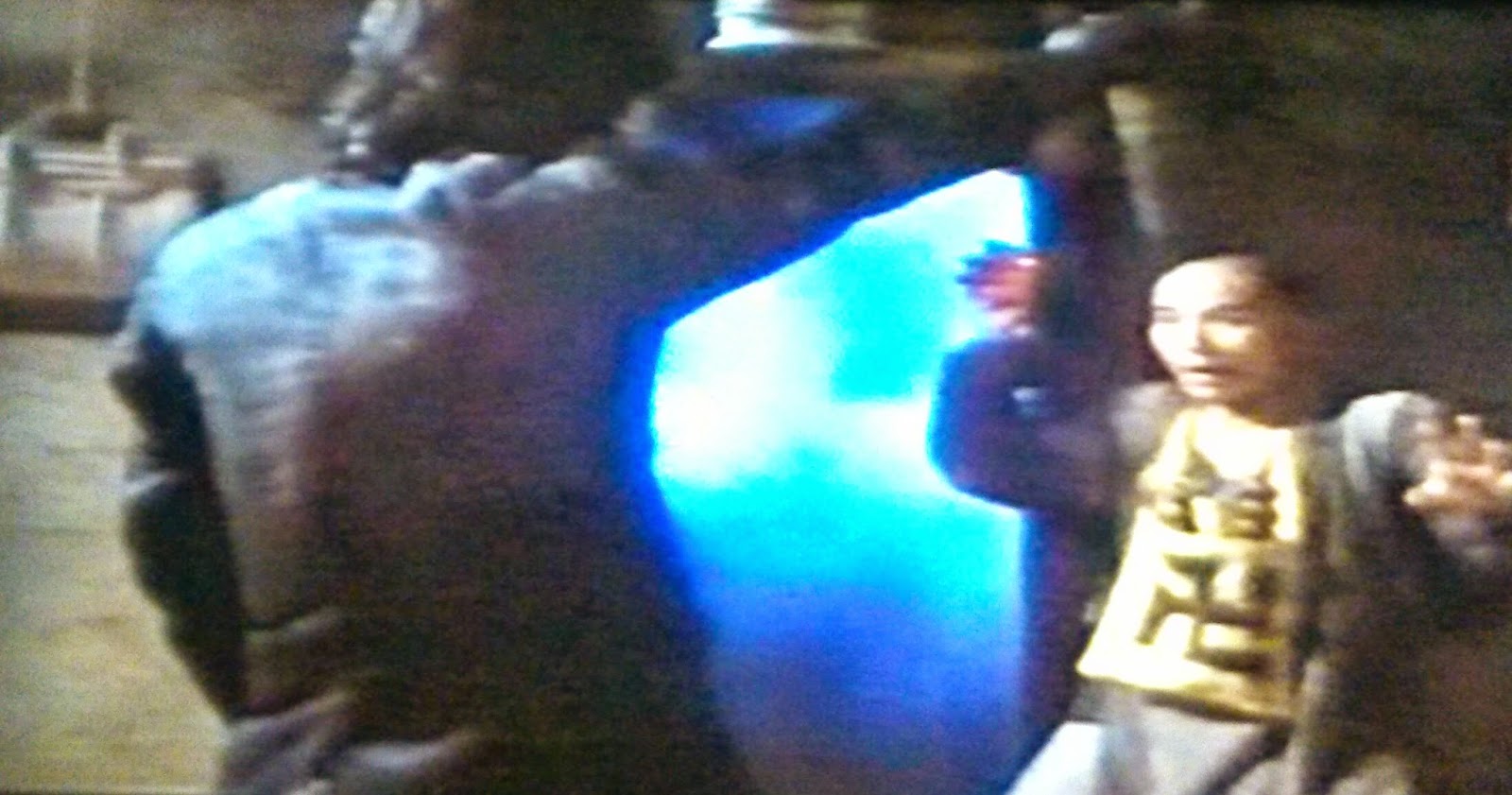 I could go on describing every detail of the film play by play but then there'd be nothing left to experience for yourself. After defeating the zombie in a most EXPLOSIVE way, the evil girl and her goon-faced-goblin-ninja-dudes finally capture the Ginseng King. The rest of the film is the boy and his elderly companion "Grampa Earthgod" and their journey to rescue "Grampa Ginseng" (which is what they affectionately start referring to him by half way through the film - lots of Grampas in this universe).

Is it all making sense yet?

Lots of incredible characters are introduced along the way. My favorites being "Magic Eyes and Magic Ears", two giant gods who live in a cave with the power to see and hear anything at any distance. More lumpy awkwardness from these two gents, and their friend "long legs" has the ability to travel great distances from literally having the longest legs in the world. He travels 12,000 miles with every step! 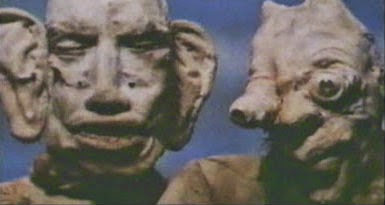 Then of course there's the alternate namesake of the film, the Three Headed Monster, our big bad boss. But honestly, despite his coolness, by this time in the film you're kind of zoning out from sensory overload. I don't mean to fall into ellipses of praise but this movie's just too rad for words! Over the past year I've been falling more and more in love with the exploitation films of Taiwan and the Ginseng King has tipped me over the edge.

I found very little background information in my research. I can't help but wonder if the character of the Ginseng King is just a one-off for the film or if it's rooted in some kind of folklore. I know that there IS such a thing as thousand year old ginseng and it's considered to be very potent and costs somewhere around $65 an ounce. I can't help but wonder if the idea behind the film was conceptualized by some devout consumer of ginseng wanting to make a PSA for children to take their vitamins. Kind of a long shot but it made ME want partake in more Ginseng so if that is the case, it worked.

Just the fact that a movie like this exists and I didn't know about it until recently gives me tremendous hope for the future. I usually don't worry about running out of bizarre little gems to watch,  but after a bit of a dry spell it's impossible not to question when your next obsession will find you. And I'm so glad that the Ginseng King found me. Life will surely not be the same.