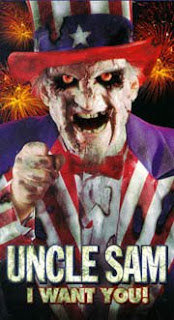 File this one under "Shoulda seen A LONG time ago!" When this came out I remember thinking it looked terrible, and really...I was right. Somewhere between being my 12 year old self and becoming my 18 year old self  I realized that I could really be missing out on something here. What I couldn't know at that tender young age is what the transition from "straight to video" to "straight to DVD" was really going to mean. Although I appreciate a rot got Asylum Mockbuster every now and again, straight to DVD just doesn't quite have the same finesse (or lack of?) as straight to video did. Not only that, between those five years I discovered a few things.

A. William Lustig is AWESOME and to be trusted.

B. I LOVE a slasher movie with a gimmick!

I miss gimmicks like this! I miss straight to video gimmicks like Jack Frost (no, not the Michael Keaton one, the carrot-penis-raping snowman one), the Night of the Dribbler, I even miss Witchcraft and it's obscene amount of pointless sequels. Only upon reflection can I truly see what the 90's (and late 80's) had to offer me.

I've been wanting to watch this on the 4th of July for the past few years. I never thought to look and see if it had a DVD release. I took for grant it that like so many other crapsterpieces, it would still be collecting dust in video stores across the Country. I didn't get to see it in time for the 4th this year, but since I'm only a few days late and I'm still feeling the annoyance of the three day weekend that has totally messed up my shipment schedule, I don't think it's too late to celebrate the right way. 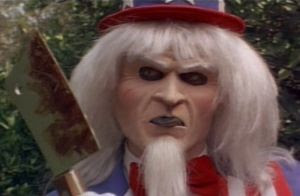 A sadistic soldier comes back from the dead and goes on a killing spree. It's never quite clear how he comes back, I think his nephew's blind patriotism has something to do with it though. Much in the style of Lustig's other horror classics, there's lots of senseless violence in rapid session. Boy does this movie have a cast! Timothy Bottoms, Bo Hopkins, Isaac Hayes, PJ Soles and Robert Forster (who's death is by firecracker!). Written by Larry Cohen. This movie couldn't disappoint if it tried! And it does try, make no mistake about that. It still manages to maintain steady enjoyment. I think I expected a little more from the title character himself, but it's still a decent slasher movie start to finish. It's hard not to have high expectations when you've waited a long time to see something. Even when it's something like this! It's no Maniac (but what is really?) or Maniac Copy for that matter but it's a worthy addition to Lustig's filmography and my home video collection!

This ended up being one of the few I bought at Video 98 yesterday that did have a release and not only that it was on Netflix the whole time! I thought I'd checked before but I must have made a false assumption. If that's not crazy enough I also came to this shocking realization...

Uncle Sam on BLUE RAY?!?! I guess I underestimated the cult following of this 1997 William Lustig classic movie.
Posted by Scumbalina at 11:30 PM