Within the past few years my interest in Russian Fairy Tales has grown from a curiosity to a thriving obsession. I mentioned my discovery of the genre in my review for the Golden Horns, so there's really no need for me to go over it again. No matter how well I know the story, each film feels refreshing and flawless. Since I'm watching another equally amazing film I feel the need to stress that point once again. The dream-like quality and imagination achieved by most of these films reaches near perfection. At least by my standards and personal taste. Finally coming to own the Snow Queen was just another small victory on my mission to conquer this illustrious world of celluloid.

Look out the window. GAHHH!

Based on the famous story by Hans Christian Andersen. The story follows two children, Kai and Gerda, who live happily with their Grandmother. One day a mysterious man shows up and offers to buy their roses, which bloom even in the snow. Because the flowers were a gift, the Grandmother refuses. The man reveals that he works for the Snow Queen and attempts to intimidate the elderly woman and children to obtain what he was sent for. They persistently refuse so he shuffles out angrily. Shortly after, the Snow Queen (played by the lovely Natalya Klimova) arrives to procure what her footman could not. In this meeting she becomes fixated on Kai and tries to lure him to come live with her in her castle, presumably as a son-like figure. He declines and she bitterly exits the room, wilting the roses with the wave of her icy hand on the way out.

The next day, while riding her gilded sleigh around the town square, not realizing who was driving, Kai playfully decides to hitch a ride by lassoing his sled to the back. When the Snow Queen has him at her disposal she speeds off, kidnapping poor little Kai. From here the story follows Gerda in her journey to find and free her brother Kai.

I've never read the Snow Queen and my only other reference is from the "Shelley Duvall's Faerie Tale Theater" version with Lee Remick, which I loved of course (as I did most of those). This one was much more upscale in budget, content, and that little extra something that I keeping finding in Russian films. Gerda meets all kinds of charming characters, my favorite being the human size birds who help her get to the castle. They're just big and cute and I want to hug and fly around on them! In fact, Gerda does exactly this, and when she does it the sequence is animated which I thought was a charming break in atmosphere. 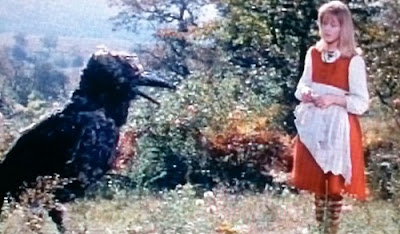 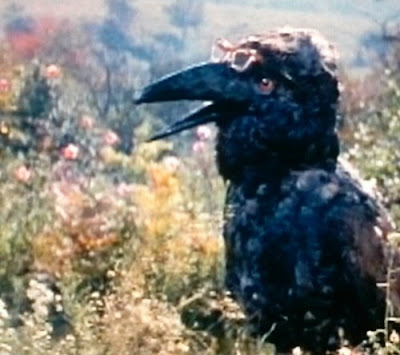 CUTE. For real though.

When the bird takes her to the castle she meets a friendly Prince and Princess who give her access to their golden carriage and warm clothing for her trek into the Snow Queen's territory. By the way, I'm loving the Princesses cotton candy colored hair. I also love the expressive mid-century style portraits of her hanging in the palace.... 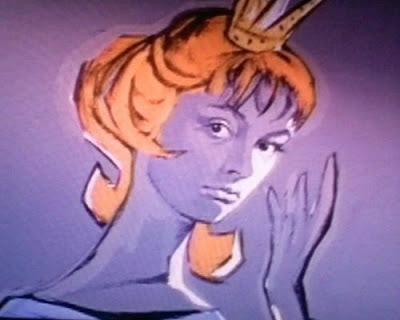 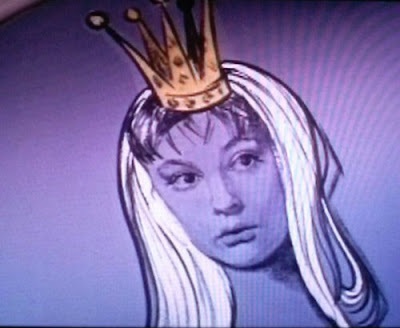 After she leaves the castle, while traveling through the Kingdom Gerda is kidnapped by thieves working for the weasely footman of the Snow Queen. Luckily, the daughter of the head bandit wants to keep her as a friend. At first the little robber girl attempts to force Gerda to stay by tying her up like a big weirdo but eventually gives in and lets her go. She also helps by giving Gerda a talking reindeer to guide her through the rest of her journey to defeat the Queen and free Kai.

My only real complaint with the movie is the lack of the actual Snow Queen. What a FANTASTIC villain. Beautiful and statuesque but also menacing and truly "cold" feeling. In all of her scenes, especially those with Kai, there's a sense of emotional disconnect that's could translate to real-life parental issues, is probably meant to. I couldn't take my eyes off of her. The Snow Queen's awesome wickedness is of Ursula-like proportions, and I would have really loved to see her wreak more havoc than her limited screen time allowed.

Other things I loved about this movie: Um,  EVERYTHING. I'm sorry to go on so many endless ellipses of praise but it's hard to talk about something you think is genuinely good (not in a silly or funny way) without simply repeating yourself. As of now, the Golden Horns is still my favorite but as I further explore Russian Fairy tales I realize that it has served two purposes. It comforts my inner-child (or whatever you want to call it), making me feel all whimsical and inspired, while still being a relevant and vastly overlooked piece of film history, nurturing that side of my interests as well. This suits me just fine as I always feel that I'm struggling between the two. One that wants to create and be carefree, which I associate with art, working with my hands and the freedom of youth. The other to speculate, reflect and engage myself which I associate with film study, reading, writing, and forming my own opinions which is a virtue that has come with maturity. Somehow these films make me feel connected to both equally important aspects of my personality. And as silly as that may sound, being that these are in fact children's movies, I cannot help but be moved by them in a way I hope I have articulated in this stream of consciousness cluster of words.


On a lighter note, I've recently learned that this genre is more commonly known as Russian Fantastika, a term used not only for family films but also for spectacular fantasy and science fiction films as well. What sets these films apart from others is their incredible use of special effects, cinematography, and lyrical story telling. This movement spanning decades has been treated with little to no respect by American distributors, probably for bullshit political reasons which I could care less about and should hold no baring whatsoever on an artistic medium. This explains the lack of accessibility of these huge budget landmark masterpieces that I should have grown up with. 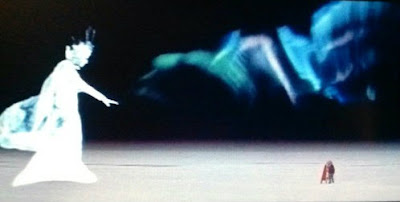 That's Gerda and Kai on the right. LOOK AT THE SIZE OF THE SNOW QUEEN. Magic.


Having browsed some other reviews, not everyone seems to have such unbridled love for this movie as I do. Many just consider it a well made kids movie. So I hope I haven't blown it too much out of proportion. But, for my purposes, it was just what the doctor ordered. A highly saturated, fable-esque, handmade-looking example of story telling and nostalgia.. I can't wait to experience the next one that falls into my lap. 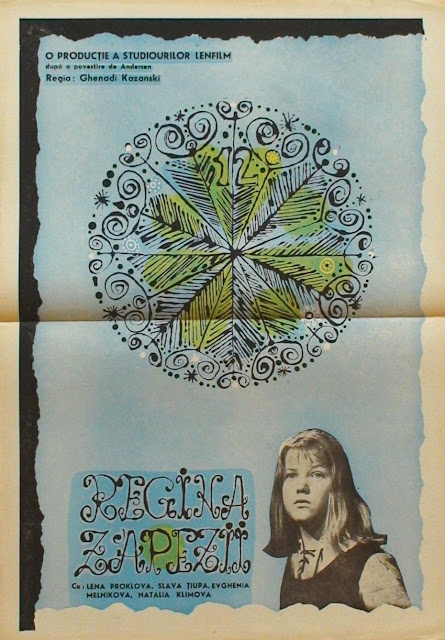 Posted by Scumbalina at 5:57 PM