It's doesn't really make any sense that I'm reviewing Zombie 5 before Dawn of the Dead, Zombi 2, 3 or 4. However, it's the last in the series that I hadn't seen and today I was craving something Italian and possibly dismissible, and unfortunately I got just THAT. 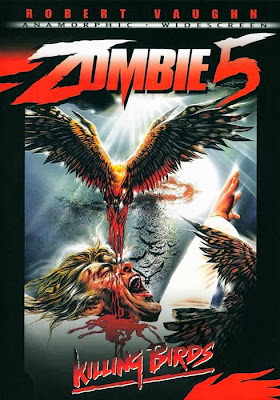 Firstly, if you haven't seen the others in the series this review won't give anything away because Zombie 5  is absolutely unrelated. Also, the title is completely misleading. There are neither Zombies nor Killing Birds in the movie. Well, kind of but not by my definition. There are BIRDS and they do pluck out a guy playing the younger version of Robert Vaughn's eyes (making that clear so you don't think we get to see Robert Vaughn himself get his eyes plucked out) but there's no real killing. There are zombie-looking creatures , or "lost souls" as one character labeled them but they don't eat people, they simply GRAB people. Violently, yes, but grabbing does not a zombie make. The whole movie just stagnates with filler and irrelevance.

The plot alone leaves something to be desired. A group of college students travel to a swampland to meet with a bird specialist (the eyeless Robert Vaughn) to study a rare breed of woodpecker. Vaughn's character (who has maybe 5 minutes total of screen time) murdered his wife, her lover and their friends years ago and their bodies were never found. Now they wander around at night looking for "fear" to feed on (I told you, these zombies suck at being zombies). It's explained that they're kind of aimlessly looking for Vaughn but somehow his blindness handicaps his ability to feel fear. A bunch of young people are attacked by zombie-ghoul-things, but not until an hour into the film. Co-directed by Joe D'Amato, it's definitely one of his lesser efforts that I've seen. It reminded of the equally inadequate Fulci film Sodoma's Ghost which came out the same year. I believe I touched upon that film in a past mini-review. At least Sodoma's Ghost had monster boobs. 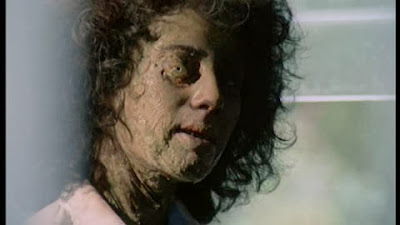 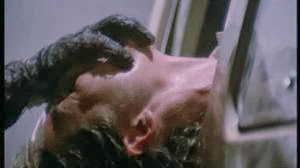 
It wasn't very good, I'm totally over it. Definitely the worst in the series. I would advise against wasting your time, but I was given the same advice and still felt it was necessary for completion. That being said, serious fans of the series only, everyone else can just move right on along.

I'll try to have something better for you guys tomorrow!
Posted by Scumbalina at 9:19 PM