Well, I finally did it. I found my Achilles Heel of shit movies. After years of searching, I found the most derivative, obnoxious waste of time ever committed to video. NOPE, don't try to convince me that anything else could ever live up to this monstrosity. Da Hip Hop Witch managed to beat out Another Son of Sam, the former holder of the worst-film-I've-ever-seen title. It was so unbearable I actually had to have my husband help me put together some thoughts on this one. After staying up way too late drinking brandy and reviewing Gore-Met, Zombie Chef from Hell. I just didn't have it in me to make my brain process this as I would a normal review. 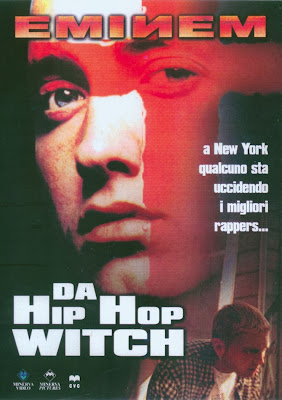 Some movies work like complex puzzles, full of twists and turns, false set ups, fake endings. Leading you in different directions, sometimes taking you back to the beginning and wrapping up the stories in intricate developments and intricate riddles. Then there are stories like Da Hip Hop Witch, that are the equivalent of   a rudimentary children's maze that you would find on the back of a cereal box. How this movie was made is mind boggling. Almost as much as how the filmmakers could have possibly coerced all of the famous rappers to appear in the film, which begs the question, How many rappers does it take to make piece of shit film? But I digress…

Da Hip Hop Witch works(?) itself as a rip-off of “Blair Witch Project”, which is obvious from the opening title cards claiming she is a “Black Witch from the projects” and the rappers she has been terrorizing  with her presence. Some of the claims made about her are:


A good 75% of this film is devoted to filming rappers redundantly reiterating their own accounts of what she looked like. Which ranged from “An ugly as bitch I wouldn't fuck” to “beautiful skank that I fucked.” Most of the dialogue seemed to be ad-libbed, shot in one take and probably a good portion in rappers dressing rooms between rap concerts. But of course, that only takes up a good hour of the film, they needed 20 minutes of story. What to do? Add two subplots that go NOFUCKINGWHERE!

How these stories interweave is the equivalent of three blind drag races speeding barreling down a dead end street. And the ending’s reveal of the identity of Da Hip Hop Witch is as confusing as it is lukewarm with absolutely no relevance to the 30-plus accounts given in the film!

Da Hip Hop Witch is a train wreck of the worst kind. It is too far gone in bad taste to be watched for camp. But, if you do decide to trek through this fecal-flick here are some things I noticed:


That’s all I have to report. It was a harrowing viewing experience. I've never felt such a combination of boredom and frustration. Glad I was able to finish this, so you don’t have to.
Posted by Scumbalina at 10:51 PM

Email ThisBlogThis!Share to TwitterShare to FacebookShare to Pinterest
Labels: 2000's, Did somebody just fart in my mouth?, movies that lead to my alcoholism, Music, Neo-Blaxploitation, Never Again..., Rip Offs, schlocktober, shot on video, straight to video, USA, Witches