After the success of Brides of Blood, director Eddie Romero re-enlisted actor John Ashley to come back to the Philippines for a follow up. Having LOVED Brides of Blood I just assumed Mad Doctor would have all of the same qualities I found so appealing in its predecessor. 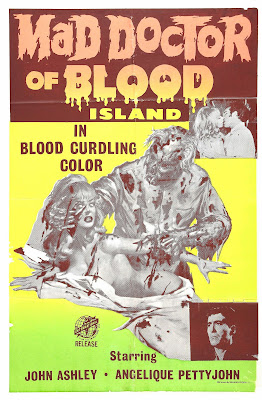 A group of people who travel to an island discover that a mad doctor is doing experiments on people turning them into green blooded zombie-like monsters. While green blooded zombies sound cool an all, Mad Doctor did not live up to Brides of Blood by any stretch. The print I watched was in pretty bad shape too. The hues were constantly changing. At certain moments it gave a cool Argento-like effect but mostly it was a distracting error. There was also this swift zoom-in/zoom-out camera shake thing that happened anytime there was danger. I've never been one of those people who gets motion sickness during shaky movie scene but this actually did give me a little bit of a headache. The Carlos character's weird over-dubbing and his Freudian relationship with his mother was the most captivating part o the film and even that novelty wore off after a while. 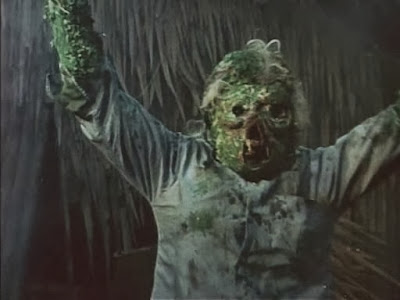 I must say though, the monster is pretty amazing looking.

I really don't have a whole lot to say about Mad Doctor of Blood Island. It would normally not make the cut of a film I felt deemed reviewing but in lieu of Schlocktober which means all horror watched this month must be acknowledged. While I wasn't terribly thrilled with it, I didn't go in expecting much more than a late night throw-away movie, and that's exactly what I got. So if you're up late and craving something island-y and gooey to nod off to, Mad Doctor of Blood island is just what the Mad Doctor ordered.


Before I sign off, I should mention that I recently saw Insidious: Chapter 2. Though I had no intention of devoting an entire review to it, I feel for sake of maintaining an accurate list it needs to be cited. I'm very particular about reviewing modern movies. It's not that I don't watch or enjoy them, I just feel that there are hundreds and thousands of blogs and websites that discuss brand new movies and it rarely feels relevant here at Atomic Caravan. To sum it up briefly, I did enjoy the film. I don't want to get into any depth or summary but I felt it was a competent if not somewhat over indulgent follow up.