Exorcist rip-offs were plentiful throughout the 70's and 80's. None however were quite as bizarre as the blaxploitation spin, Abby. While on an Archaeological dig in Nigeria, Dr. Garret Williams (played by William Marshall) discovers a puzzle box covered with all kinds of boners and stuff. The box is depicting "Eshu", an African trickster and sex demon. When he opens the box a gust of wind explodes and the spirit of this deity travels across the world to inhabit his daughter in-law, Abby. 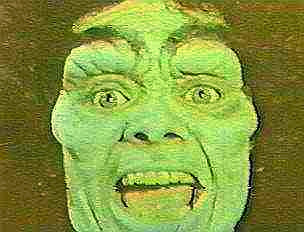 Abby, a mild mannered preacher's wife, begins to display some pretty wild behavior. Rowdy sexual appetite, speaking in different voices, general blaspheming, you know the drill. In proper Exorcist rip-off fashion, she gets a little out of control (mostly sexually) and William-Blacula-Marshall has to save the day. I love how Abby's face contorts into this awful primordial low ridged uni-brow creature, and it seems to change slightly between scenes. 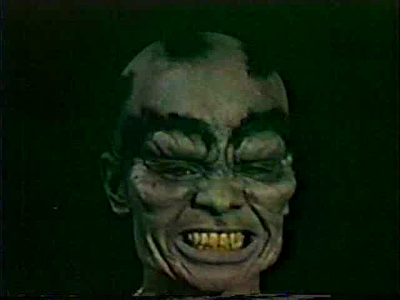 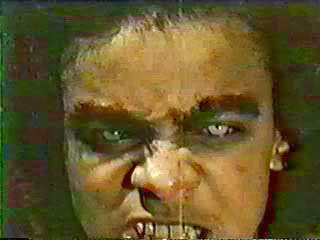 Unlike the various other rip-offs, Abby caught a lot of heat for the uncanny similarities in plot which ended in a lawsuit against AIP, which is why the film will probably never have a proper release. The blaxploitation angle really adds a dimension of absurdity that gives the film a life of it's own. Don't judge me but I've never been a huge Exorcist fan. I appreciate what it is and what it did for the horror industry and I absolutely ADORE the sequel (it's a masterpiece, really. Shut your face). The original never particularly moved me. However, the dozens of imitations that it influenced have schlock appeal and Abby is the undefeated champion of ludicrous Exorcist rip-offs. From the amazing funk score to seeing the King of Cartoons in a dashiki performing an exorcism in a sleazy dive bar, Abby is untouchable. 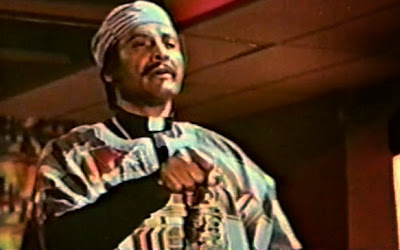 It may not have reached the magnitude of the Exorcist but it certainly retains a place on the annals of cult movie history and is worth it's weight in sexually explicit demon possessed African artifacts.

Day 5 of Schlocktober and I'm still somehow on schedule! I plan to do some mini-reviews in the next few days so be sure to check back!
Posted by Scumbalina at 6:29 PM