I was recently discussing fun throw-away horror movies with a friend when he asked if I'd seen Spookies. I knew I owned it but couldn't recall having watched it. I wanted to kick off the Schlocktober marathon with something light and similar in spirit as the Hilarious House of Frightenstein since it was fresh on my palette. I was expecting a Gremlins/Ghoulies/Critters-esque tiny creature movie, but what I definitely was not expecting was the realization five minutes in that I in fact HAVE seen Spookies! What's worse is that it couldn't have been that long ago because I've only owned the film for a few years. I find it a bit worrisome that at the tender age of 27 my memory is already slipping. Not every detail was intact, perhaps I watched it in a party setting. After this more focused viewing I can definitely say it's a magical patchworked casserole of confused plots and monsters running amok. 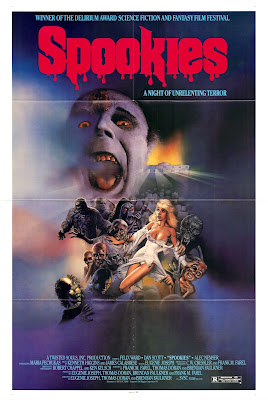 The film is essentially two unfinished movies melded into one chaotic mess of bewilderment. The original story followed a group of teenagers (mostly played by actors in their 30's) who end up in a haunted house. One of the girls starts messing with a Quija bored and becomes possessed. This whole story line had a strong Night of the Demons vibe, and the possessed girl was harnessing some serious Angela realness. 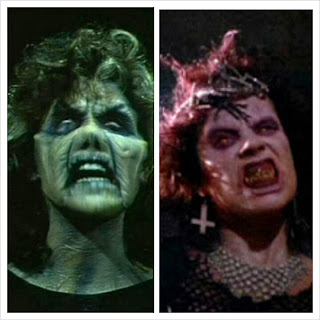 See what I mean??

The second story which was filmed later and re-edited to make an even less comprehensible spooktacular opus featured a sorcerer with a were-cat trying to reanimate his dead bride. It's all tied together by the notion that all the deaths by various demons via Angela-clone-Quija-mistress are sacrifices for the resurrection of his lady friend. 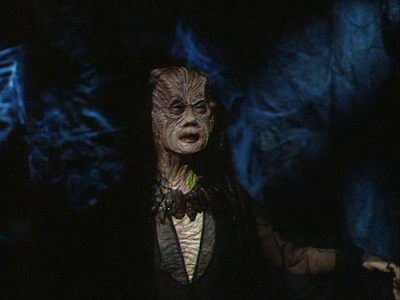 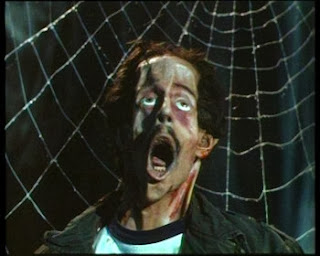 There were a few moments in the film that I feel are worth noting. Starting with a brief but memorable character in the graveyard at the beginning of the film. A young boy who has run away from home encounters a weird drifter dude hanging out in a tree. I was so sure this guy was going to turn out to be a monster of some kind. He was creepy, had a bit of a Lost Boys quality to him? It was such a small part but the general presence of the actor was strong and they really should have taken the character further. (apparently, I'm not the only one who thinks so.) 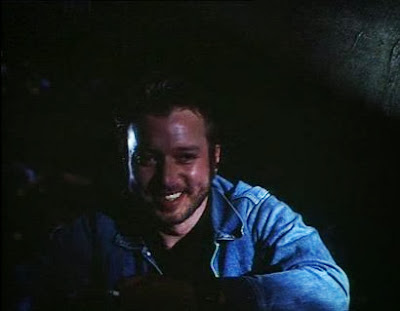 There were almost too many characters to keep track of but as far as the actual creatures I was quite taken with the farting zombies and the exploding grim reaper. The film was so charmingly jumbled that no more than 5 minutes went by without introducing a new monster. It had tinges of so many different films that I didn't even know where to begin making comparisons. Elements of Sorority Babes in the Slimeball Bowl-O-Rama, the directing style of a masterpiece such as Dungeonmaster with shades of Andy Milligan. Really though, I can't think of a negative thing to say about Spookies aside from wanting more of the creepface drifter. Spookies serves it's purpose and left this viewer more than satisfied (at least the second time around). 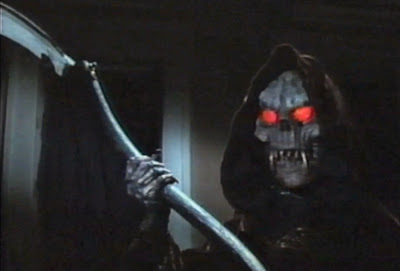 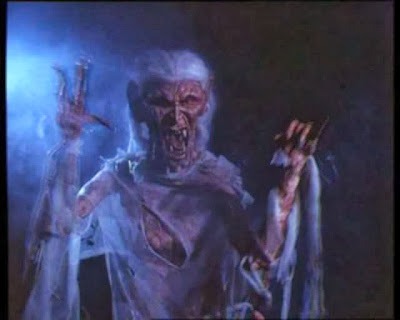 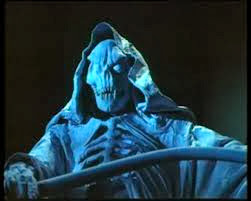 It's like a Spirit Halloween store exploded on screen!

Day 1 accomplished! So far Schlocktober is off to a good start! Check back tomorrow for whatever ends up tickling my fancy later this evening. Will there be a wizard? a chainsaw? a cannibal? a house hold appliance? Who knows, but I'll try to make it a good one!
Posted by Scumbalina at 4:24 PM