Some movies have you reeled in the first time you hear the title. I really didn't care what Oily Maniac was, I needed in my life. Discovering it was a Shaw Brothers production was just a huge added bonus. 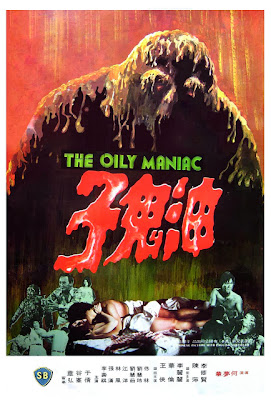 A crippled guy named Shen is given a magical spell by an old family friend who's about to be executed for accidentally killing a criminal. The criminal belonged to a gang of miscreants who are trying to steal the family's "coconut oil garden". The spell, which is more of a vengeance curse, requires Shen to dig a hole on the grounds of the oil farm and say some magical-spell-stuff while immersed in oil. What emerges is a big ol' slimy turd looking Swamp Thing-type monster who destroys any wrong doers, and there's no shortage of them running around the Coconut oil garden! 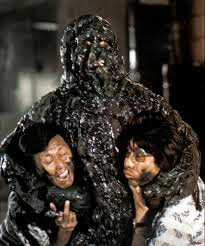 When Shen is not out gallivanting in a rubber diarrhea suit dousing himself in gasoline, he works as a legal assistant in a sleazy lawyers office. We get to see some really interesting cases. First, with a lady who falsely accuses her neighbor of rape. In a flashback sequence we see both sides of their story. When the Oily Maniac finally gets to her, it's through the spout of her lovely pink bathtub, which is in her lovely pink bathroom. I'm not sure if that's something even worth mentioning, but seeing the black oil come out of that Jayne Mansfield-esque bathtub was visually awesome. 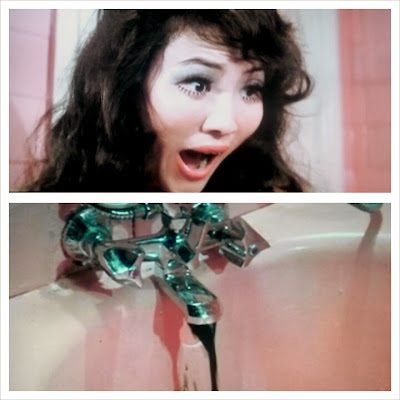 It was around this point in the film that I realized that Oily Maniac was noticeably more salacious than any other Shaw Brothers films I've seen. Lots of sexual situations, rape and more breasts than I've seen in any Hong Kong film made around this time aside from some Concubine themed blue movies.

One of the cases is against a doctor who did a botched boob job. The Oily Maniac takes care of her while she's literally sewing the virginity back on to a prostitute so her pimp can charge more. YES. This is happening.

The rubber suit isn't the most flattering during fight scenes (especially since the opening was flapping around in the back) but there are some fun effects. Seeing him liquefy into a puddle and transform back into a human was pretty interesting. By interesting I mean, cheap and passably effective. Oily Maniac lived up to and even surpassed my expectations. While it would make a great companion piece to the more supernatural works of the Shaw Brothers such as Black Magic or the Boxer's Omen, it works well on it's own as a completely insane hyperbolized homage to American Monster movies. There's a Hulk-like quality to the Oily Maniac. He gets angry because of one thing or another, a few squirts of motor oil later and he's ready to bash someone. I feel that it most certainly must have influenced the Toxic Avenger, or at least it did in my dreams. Regardless of influences and counterparts the Oily Maniac is an absolute essential genre film and I can only hope that it eventually gets the digital treatment that it truly deserves.

Day 2 complete! I'm not sure if I'm going to continue counting down the days at the end of my reviews leading up to Halloween, but it sure does feel right! No idea what kind of horror mayhem is in store for me today but you can be sure to find out first thing tomorrow on Day 3 of Schlocktober!
Posted by Scumbalina at 2:07 PM