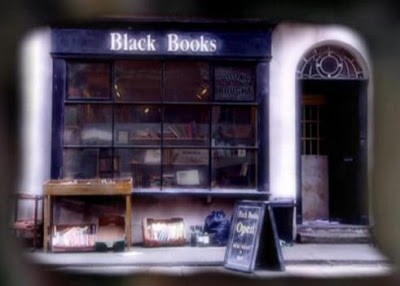 This show really seemed to come out of nowhere and disappeared just as quickly, in America anyway. I can't remember what exact year it was, sometime between 1999-2001, which would put me in between 7th and 9th grade. I believe it was around the time they started that awful show with Dave Attell. I had no interest in Insomniac or whatever else they showed in that late night line-up but I instantly fell in love with Black Books. I remember having to be really quiet and secretive because it was a school night. I didn't care how tired I was, if I could get away with catching an episode of Black Books it just had to be done. I can't even remember what grade I was in, let alone whatever I was supposed to be learning. I do remember telling the other students and no one having any clue what I was talking about. For the most part things have remained that way. Over the years when talking about the Young Ones, Mr. Bean or any of the other British comedy series I like, whenever Black Books would get brought up I've rarely encountered others who were lucky enough to catch it's brief American syndication.

I recently noticed that Borders had Black Books season 2 on DVD! Thankfully Netflix is here to aide my broke ass, so there you have it. I've been re-experiencing it for the past few days and even well into my 20's I laugh just as hysterically as I did in my tweens, only this time I don't have to muffle it avoid waking up my Mom. 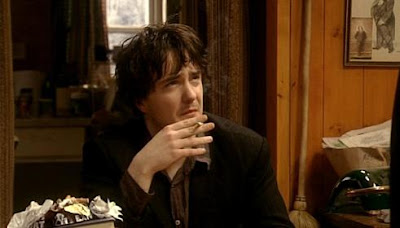 Written and starring Dylan Moran as a chain smoking wino named Bernard Black who owns a book store. He's rude and belligerent to customers, while his friends Manny and Fran are always keeping him from falling apart completely. Naturally lots of British slapstick ensues mostly as a result of Black's drunken shenanigans. There's something kind of John Cusack-y ala High Fidelity about the character. Bill Bailey plays Manny, a perfect foil for Black's mayhem. Check out this show if you haven't already. It's further proof that the English are the only ones who know how to make a sitcom work.