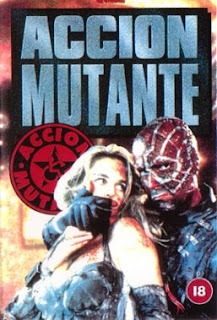 I really had no idea what I was walking into with this one. I knew it was a Spanish film with a cult following, that's about it. Now that I've seen it, I'm glad I went into it blind. Knowing nothing made it even more of a mind blowing experience!

Set in a post apocalyptic future run by all attractive people. A group of crippled terrorists revolt against everything this modern oppressive society stands for by blowing up buildings and assassinating public figures. When their leader, Ramon, is released from prison he schemes up a plan for them to kidnap the daughter of a wealthy businessman for an outrageous ransom. At her wedding no less, they infiltrate and massacre the entire guest list and take Patricia with them in their crazy spaceship.

Ramon has already set the wheels in motion to turn his team against each other. He wants all the money for himself so he convinces them that there is a traitor among them, then begins picking them off one by one until all that's left is half a siamese twin who must drag his dead brother around. After their spaceship crashes on their destination planet, Patricia begins to act strange. Ever since Ramon unstapled her lips shut, she seems to have feelings for him. Which he repeatedly reminds her is just Stockholm Syndrome. This is the point I think I should comment on the obvious connections between this storyline and the taking of Patty Hearst. Her name is eve Patricia! 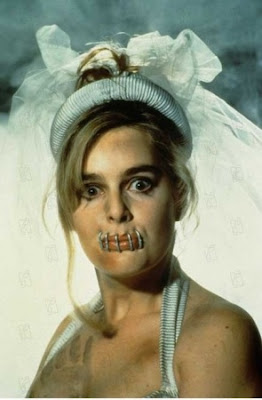 This movie really lives up to it's title. Literally non-stop Mutant Action from start to finish. It just gets more outrageous as the film goes on. Colorful strange characters doing bizarre and disgusting things. Like a combination of Paul Verhoeven and Frank Henenlotter. I'd even go a step further and say at times it reminded me of a Riddley Scott movie. It's no wonder this movie was an instant cult success. Over the top violence executed with a decent budget, depraved charcters and an amazing punk soundtrack. It really is a modern masterpiece. Directed by Alex de la Iglesia, this would be the first of many cult movies he would direct, including The Day of the Beast, which I've also been wanting to see but hadn't made the connection between the two movies. 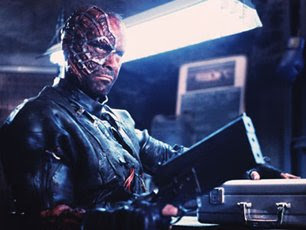 Despite it's cult following, this movie is still relatively unknown. I never hear people talking about it. If you haven't seen it I urgently recommend tracking down this accion packed freak fest!
Posted by Scumbalina at 11:07 AM