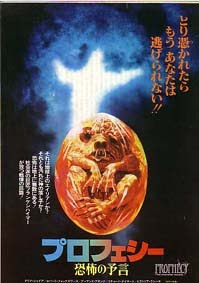 When I bought this I think I was mixing it up with the 1995 movie The Prophecy with Christopher Walken, not that I would rather have that one. In the long run I think I'm better off with this John Frankenheimer version. What starts out as a really serious eco-political thriller ends up being a total schlockfest in the end, and isn't that the way it should be?

Robert Foxworth plays a peace loving doctor who is frustrated with his futile attempts at making the world a better place in a big city. When offered a job with the Environmental Protection Agency which would give him a change of scene and a chance to make a difference in another way, he accepts. He doesn't know that his wife, Talia Shire, is pregnant. She's afraid to tell him because he doesn't want to contribute to the over population and squalor of the world today. Understandable.

When they arrive they discover that the loggers and the local American Indians are feuding over land. It has turned violent and his job is to investigate to see what he can turn up. Armand Assante plays the leader of the Indians and he gets into a particularly awesome skirmish with a lumberjack. A fight ensues with an axe and a chainsaw as the battle weapons! 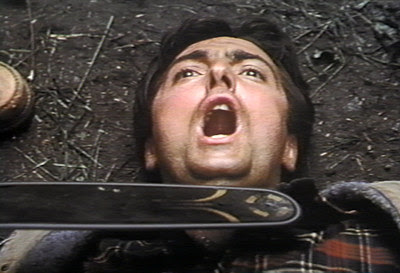 Something very large and scary is killing people. The loggers think it's the Indians retaliating but the Natives know better, they think it's "Katahdin" a legendary beast who's described as "larger than a dragon with the eyes of a cat". Not quite, but I'm getting there. Hawk's wife Romona is a midwife who describes birthing babies with deformities that usually die right away. Many locals get very sick and collapse. The white devils of course chock it up to the old stereotype of redskins not being able to hold their firewater. When Ramona introduced the Doctor and his wife to her father, he describes the place as being "the Garden of Eden " and fishes out a skanky mutant tardpole for proof.

At first I just thought it was a mudskipper but upon closer inspection I noticed that it wasn't, and it also couldn't be from the Garden of Eden because this is truly AN ABOMINATION OF GODDDD!!! 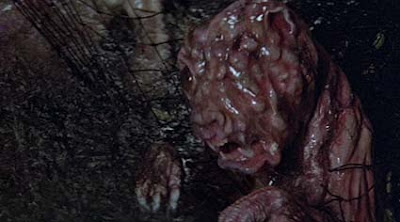 They realize that the Paper Mill is secreting mercury in the water so the whole area is a melting pot of grotesque deviation. Everyone/everything drinks the water, eats the fish and then dreadful mutations occur.

Oh, and did I mention that the large scary thing killing people is a BEHEMOTH MUTANT BEAR??... 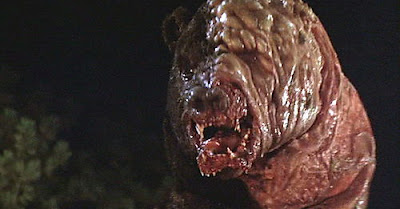 I was pretty surprised about that. I was expecting something a little more monster-y. As far as I can tell, aside from it being hideous, it seems to act like any grizzly bear. Especially one whose baby has been stolen! (yeah, that was a cub up there) At first I was disappointed by this, I liked the idea of the Indian legend monster being real. But no, just another don't fuck with nature horror movie. I got over it quick though. The bear delivers some nice fuck-uppery though. Lots of people throwing, face eating, bitch slapping, it can even breathe under water.

In a lot of ways this movie reminds me of a better version of Godmonster of Indian Flats! Toxic gasses make local sheep turn into mutant sheep that serve ample helping of terror to the local assholes. Toxic mercury make big bear a BIGGER face-inside-out beast freak. They even kind of look alike! 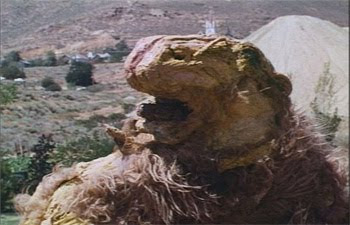 For the record I'm not really sure where any "prophecy" fits in here. Not that I mind. I love that I was inadvertently mislead by this movie. It made all of the antics more entertaining in the long run. In the end...well, I'll let you find out. But for the record, preggo Talia Shire eats the same fish that Momma bear does. Suddenly that abortion that the Doc suggested is sounding pretty good!

Posted by Scumbalina at 4:35 PM

Email ThisBlogThis!Share to TwitterShare to FacebookShare to Pinterest
Labels: 1970's, animals run amok, did somebody just fart on my sheep?, mutant cuties, USA