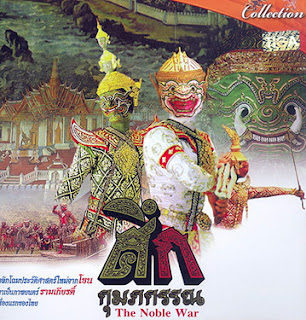 I realized that it had been almost a month since I reviewed my last Sompote Sands disaster, Hanuman vs. 7 Ultramans. This is just unacceptable. I became so enamoured with Sands as a director, producer and a douche bag that I found his work to be truly daunting. Alongside alluring, disgusting, hypnotizing, ugly and somehow whimsical. The first experience left me with a lot to think about. As a reviewer and the direction this obsession could take me. It was a little terrifying to jump into the next one. I decided to sit with it for a while and fully absorb Hanuman vs. 7 Ultramans.

The past week I've been feeling the itch for more, but where to start? I decided to take a step back and try something a little more "tame". Now that  I've seen The Noble War I realized that that's just not a word to use when describing this guy's work. Because my reception of this movie was so bewildering I'm going to describe what it was like for me going into this completely blind with nothing but language and cultural barriers.

As I'm sure you've guessed, like pretty much all of Sompote Sands movies, there are no subtitles. I can usually deal with this pretty well. It's easy to follow a simple plot by observing the actions and change of setting. The Noble War was a little more difficult. For one, the acting is in traditional theatre style. They're almost dancing out their actions. Lyrical body language while Thai overdubbing speaks for the characters whose lips aren't even moving. This distracted me from following the story as well as I might have.

From what I could tell it revolved around all of the Hindu deities. Doing all kinds of senseless things I couldn't begin to fathom. It started out simple enough. Hanging out in a glorious palace fit for a ...God! Meanwhile lower/God/Monkey-things played flute and entertained the higher God(s?) and pretty ladies would feed them grapes (ok I made up the grape part). Much how you'd suspect an Eastern God would hang out. In come new similar looking Gods and they chatter for a while. Then they go outside and look in a magic mirror to see a war going on.

Here's where I got kind of lost because these characters, although awesome and sometimes different colors, all looked alike to me. The language barrier prevented me from catching their names so pretty much from there on out I had no fucking clue what was happening. So let me try and break it down.

That pretty much sums up my viewing experience. I paid CLOSE attention to the dizzying psychedelic scenery to make sure I didn't miss anything that might perhaps transcend cultures.Only the three V's. Violence, vileness and vomiting. Make that four V's: Visuals. The Noble War is visually stunning. Nothing short of an epic, really. The rich pigments made my entire living room illuminate with glowing rainbow hues. Definitely a candidate for movies that should be experienced under the influence of LSD. At times it reminded me of the Thief of Bagdad (1940) with it's elaborate technicolor atmosphere. Even at times of utmost confusion the electric Bava-esque surroundings will keep you glued to the screen.

After the movie I felt really good, enriched somehow. I'm also left with a sense of fulfillment I've only gotten seeing a Sompote Sands movie. I can see a trend forming. Of course I got online to do my usual post-movie-research only to find that there's little to no information on it. Only the review that lead me to it on Die, Danger, Die, Die Kill!'s blog. Perhaps I'm just completely dense and oblivious to the Hindu religion or maybe I'm just less educated on the subject. To refrain from anymore paraphrasing and because I'm forever grateful to I do recommend reading Die, Danger, Die, Die, Kill's review as it appears to be much more self aware than I am. I was far from making any connections with the Ramayana, the epic Hindu legend. The Noble War was evidentally based on the Thai adaptation, the Ramakien. Being a newbie to Thai culture I wasn't even aware that they had their own adaptation (that's what I get for dropping out of World Religion). Being familiar with the Ramayana though, I was able to make connections that didn't even occur to me as I was watching. I think I might have caught on if Sita (Sida, pretty grape feeding lady by Green man's/Rama's side) was in it more, since she's basically the reason the war began!

So for those who are unfamiliar with this story, I suppose the plot can be summarized as easily as the Ramakien or the Ramayana. A war erupts between Rama and Thosaganth for the kidnapping of Rama's wife Sita/Sida. Only Rama gets Hanuman and his army of Monkeys to do his bidding. That's it! All that scrambling around was just the result of Sompote Sands unrelenting shenanigans.

Compared to what I've seen and what I know of Sompote Sands I think it's safe to say this is traditionally one of his "better" movies. Aside from a few nasty out-of-place sequences peppered in The Noble War really does have a touch of class. The date throws me off a bit though. Based on what I've read on thereformentioned blog and Sci-Fi Japan. Hanuman vs. 7 Ultramans and the Noble War share a scene. Hanuman is in outer space talking to a Deity in a fiery orb (the sun I imagine). Yes, he is the kind of director that reuses scenes from his own movies. Although there's really no solid information about any of these movies, I've been under the assumption that Hanuman vs. 7 Ultramans was made in 1974 since that's what all websites and bloggers I've encountered cite. But that movie obviously a mish-mesh of a scenes from other movies (ie: the 6 Ultra Bothers vs. the Monster Army). I highly doubt he used a scene from Hanuman vs. 7 Ultramans for The Noble War. It MUST have been the other way around. You know what I think? I think we all have the Hanuman date wrong. It's always classified as being from 1974 but I think that's because of the common misconception that Hanuman vs. 7 Ultramans and the Six Ultra Brother vs. the Monster Army are the same movie, when in fact they aren't.  Sompote Sands used scenes (a lot of them) from Monster Army but they are separate entities completely. If you've seen it, think about Hanuman vs 7 Ultramans. Think about how it looks. Refer to the picture in my review if you want. It really looks 80's! Mid/late 80's in fact. I think I'm onto something here. I'd be interested to hear everyone's thoughts.

I can easily say I enjoyed this as much as my first Sompote Sands movie. Where Hanuman Vs 7 Ultramans lacked, the Noble War provided. I don't mind being baffled by a candy colored absurdity. When it comes to Sands the payoff is pretty good. Not for everyone but worth while for explorers of true outsider cinema. No pretense here, folks. Just raw unadulterated curiosities.

Posted by Scumbalina at 6:35 PM