Movies heavily influenced by a political or anti-political agenda have never really been my forte. However, in Europe (mainly Eastern Europe and definitely in Russia) fantasy and sci-fi films are used as a creative outlet for retelling tales of communist oppression in a much prettier package. It's safe to say that the subject only appeals to me, enough to write about at least, if it's done in a visually stimulating and theatrical way. When I came across Jean-Christophe Averty's adaptation of Ubu Roi and it's expressive black and white cut-up style visuals, I knew it was something I needed to see no matter what it was about. 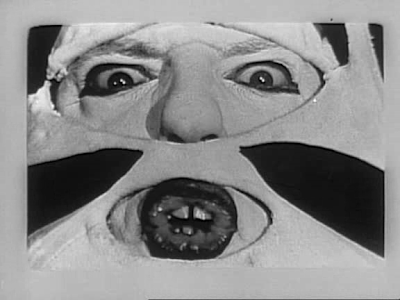 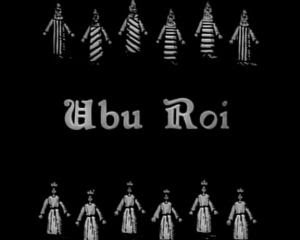 Based on Alfredy Jarrry's 1896 play about a greedy, overweight, selfish asshole named Pere Ubu. [Yes, Pere Ubu, one can only assume that this is where the seminal post punk punk band drew their inspiration.  Having never heard of Ubu Roi or Jarry's other plays, I had never caught the reference.] Ubu Roi follows Pere Ubu on his journey to overthrow the current ruler and become King of Poland. Along the way he betrays many of his followers ("the Pere Ubists", if you will), taxes the civilians to an unreasonable degree and eventually slaughters just about everyone. Along his side, is the equally crude but somehow more likable Mere Ubu, who's like a foul mouthed Lady Macbeth. Despite her showing similar infantile and heartless characteristics, she's a good foil for Pere Ubu and I can't help but enjoy seeing her giving him a hard time. Jarry's plays were often criticized for being juvenile and unfinished, but it was these kinds of bourgeoisie and pretentious sentiments that he was mocking to begin with. His plays are the earliest examples of Theater of the Absurd, and not only that, they're fucking hilarious. Ubu Roi is like Shakespeare with fart jokes. Jean-Christophe Averty's influence is not to be overlooked either. His made for tv adaptation features simplistic but highly effective and visually exciting animation. I couldn't help but be reminded of the work of Karel Zeman with films such as Baron Prasil and A Deadly Invention using more expansive but similar cut-up animation techniques. I also noticed some striking similarities to Forbidden Zone, not just in it's vaudevillian cartoonish style, but thematically as well. And I would be remiss to acknowledge one final reference, as my husband pointed out, Pere Ubu bears a striking resemblance to Oogie Boogie from Nightmare before Christmas. It didn't take much research to come to the conclusion that he was in fact a major inspiration for that character. 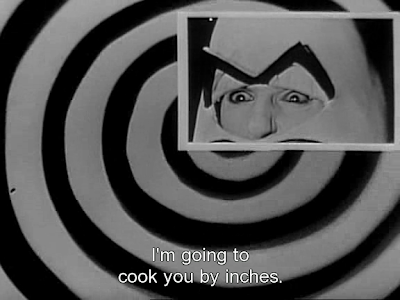 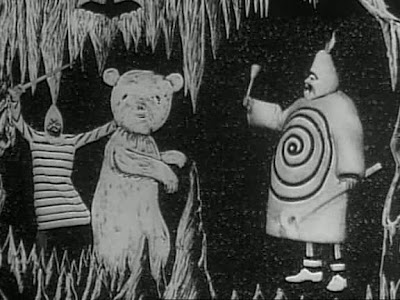 Don't you want to see it now???  Luckily, you don't have to look very far. The entire thing is on youtube with subtitles...


An illuminating viewing experience indeed. Not only did I learn about this admittedly famous character that I probably should have already been familiar with, but it lead me to discover Jean-Christophe Averty who is officially on my "Directors-to-Obsess-Over-In-The-Future" list. He's probably most known for directing the 30 minute short "Melody" aka "Histoire de Melody Nelson" starring Serge Gainsbourg and Jane Birkin. He also has a myriad of experimental art films to his credit, all of which I need in my life. Hopefully I'll have more to say on Averty in future reviews. 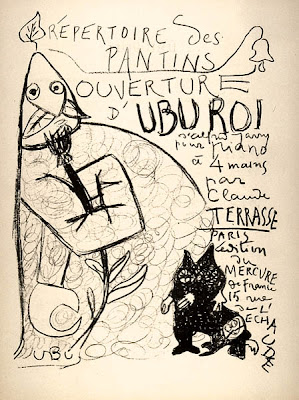 A brief apology for my absence. I've been in a transitional period between jobs but movies have recently come back into the forefront of my priorities and I have a dozen or so titles I want to review from just the past few weeks. You'll be seeing much more of me in the future, I promise ;-).
Posted by Scumbalina at 2:00 PM

Email ThisBlogThis!Share to TwitterShare to FacebookShare to Pinterest
Labels: 1960's, animation, avant garde, comedy, experimental, France, made for tv, theater of the absurd