What better way to celebrate April Fools than to spotlight a video that's a complete aberration on humanity. Creating Rem Lezar is a bit of an anomaly. Considered to be a holy grail of sorts by many collectors of found footage. It's a straight to video children's musical meant to inspire some kind of critical thinking and develop social skills. I'm sure all it ever accomplished was inflicting irreparable psychological damage. 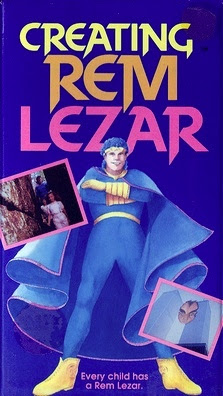 The story follows two kids, a boy named Zack and a girl named Ashley. They're both constantly getting in trouble for daydreaming. What else do that have in common other than being lame and having no friends? They share a "special" imaginary friend named Rem Lezar. A gown man dressed as a superhero with a blue mullet. They love Rem Lezar, and who wouldn't? 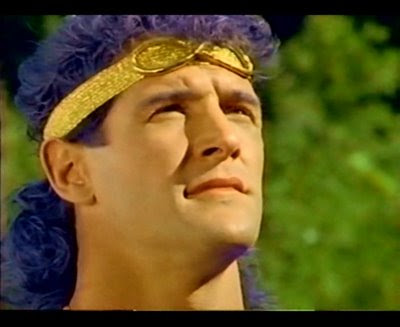 One day in ceramics class Ashley notices Zack molding a life like sculpture of Rem Lezar. She comes over to inquire about his inspiration for the piece and he tells her to "go braid her hair or something". And this kid has no friends? She explains her demented friendship with Rem Lezar. Of course he's real, if he's not then who's the strange man sneaking into her bedroom at night to sing sad songs while watching her sleep? She then exasperates "you see, a girl CAN understand Rem Lezar". But can we really? I might not want to understand a man who wears tights and stands over small children's beds at night. No, Ashley, I think you're the one who doesn't understand Rem Lezar, that goes double for you Zack. This isn't a matter of boy and girl this is a matter of AMBER ALERT. 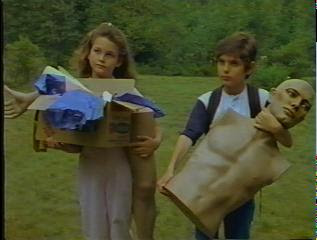 Despite their differences, they bond on the fact that they share the same friend and no one believes them. They decide to make Rem Lezar real. How do you make a friend? With mannequin parts apparently. In an extremely disturbing display of delusional behavior, the children put together a make-shift Rem Lezar out of pieces they found god-knows-where. Where do find a blue leotard for an adult male on short notice? Surprised that he's still an inanimate object they sing possibly the most terrifying off-key song in this entire disaster. It works! He comes to life and joins them in their mournful dirge. He cradles them to sleep singing...all alone in an empty barn. How am I watching this? 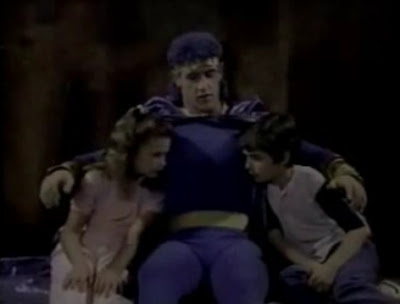 The real fun begins when they wake up the next morning and find that it wasn't a dream. Rem Lezar IS real. The began an adventure to find the one accessory missing from his ensemble. The Quixtoic Medallion. What makes it "quixtotic"? Nothing. My guess is the writer wanted to throw a cool word in there so they put a figure 8 on a saucer, spray painted it gold and called it "quixotic". What's even better is that at the end there are literally credits for "Quixotic Medallion Construction". Which is now going to be code for when I have to take a shit, because that's exactly what Creating Rem Lezar has done to my life. 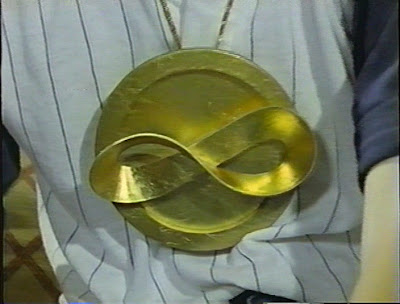 Come to find out there's a bad guy in this movie! (Aside from this fruity pedophile following these two kids around) We also have Vorock, a giant pixelated video toaster head. He reveals that he's stolen the Quixotic Medallion because he has no friends. He hints that he's hidden the medallion at the "highest point of the mind". Whoa. Rem asks the kids what they think is the highest point of the mind? Zack says a mountain. Ashley says a skyscraper in NYC. Which struck me as some blatant adults-writing-what-they-think-a-stupid-kid-would-say answer. My answer would have been "A flying unicorn. duh.". For the record, the correct answer ended up being "love". "Love" is the highest point of the mind. See what they did there?

CRL makes feeble attempts at being educational or enriching in some way, but fails miserably. At the end of the movie the credits list several P.H.D.'s and Psychotherapy clinics, which leads me to believe this was funded by such organizations. Which also leads me to believe it was shown to patients. Which leads me back to my original statement of Creating Rem Lezar causing irreparable damage to young minds. Could you imagine if a child who had actually been victimized saw this film? Horrifying.

A few notations I jotted down while watching Creating Rem Lezar, but couldn't quite figure out how to work them into my summary...

For the longest time I thought the title of the movie was "Creating R.E.M. Lasers"...which was something I desperately wanted to learn. Still do. Anyone have THAT movie?

There's so much to say about this mind fuck that you can't really began OR end any kind of logical dissertation. I didn't know where to start this thing and I don't know how to finish. This 48 minute feature is like that awful quixotic medallion. An infinite symbol of tackiness and despair. Much like my life now that I can't go back and un-see it. Honestly though, it was a delight! I'd like to have been inebriated or at least amongst friends but the truth is, it was a blast to watch. Even alone in your apartment surrounded by cats.You can watch the whole thing in six parts on youtube.

Fun Fact: Rem Lezar is the guy that sang that stupid fucking Snickers song. Good to know that those golden pipes took him somewhere in life. 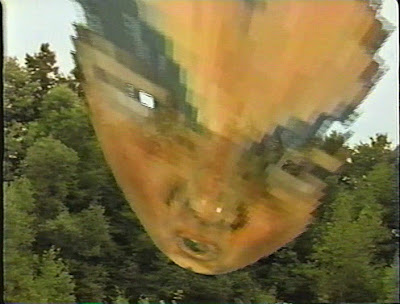 Posted by Scumbalina at 4:24 PM

Email ThisBlogThis!Share to TwitterShare to FacebookShare to Pinterest
Labels: 1980's, Did somebody just fart in my mouth?, Fringe Video, kiddie matinee, movies that lead to my alcoholism, musicals, straight to video