A Tribute to David F. Friedman 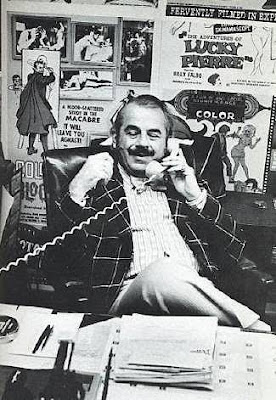 I was lucky enough to attend a 12 hour David Friedman retrospective last Saturday at the New Beverly. There are several reasons this occasion was very special. New Bev's celebrity tributes are always heart warming and sincere, no matter how sleazy the films are. There's an enthusiam amongst the audience and staff that creates creates a comfortable environment for movie fanatics alike. Then there's the movies themselves, beautifully unrestored in all of their 33mm glory. Whether you have a penchant for cult movies or classics, the New Beverly really delivers the bacon.

David F. Friedman was always just a name I saw on my H.G. Lewis movies or peppered in my Something Weird catalogs. I noticed that he produced mostly nudies, which based on what I've seen from other schlockmiesters isn't a very exciting genre. Mildly (at best) entertaining plots sparsely inserted between painfully drawn out soft core sex scenes. This prevented me from digging much deeper than my beloved Herschell's filmography. Although Friedman was a blip on my cinematic radar, my fandom definitely came to fruition with the passing of this phenomenal tribute.

When I saw the advertisement on the flyer, only a few of the films had been announced. I was mostly excited about Blood Feast. It's been one of my favorites for years and the prospects of seeing it in the theater seemed too good to be true. I've taken a lot of time off of work recently for various events so I decided to leave this one up to fate. If I got the day off, great. If not, oh well. As chance would have it, I got the day off. My husband unfortunately didn't so it looked like I was flying solo. I thought about just catching three or four of the movies, then realized that it didn't make sense to only see a few when I had the whole night clear and this was kind of a once in a lifetime event. So I showed up at 3pm for the first movie, Space Thing, which you can expect a review for shortly.

I walked in knowing relatively nothing about David F. Friedman, after 12 hours and several guest speakers telling stories I felt like we were good friends. I feel kind of blindsided by this whole aspect of exploitation which is slightly embarrassing considering it's been staring me in the face for years. So I'm writing this blog to set up my next 7 reviews. That's right, I'm reviewing each every one of the films that were burned into my retinas during that 12 hour period. I've never watched that many movies in one sitting before. Four, maybe five at my most obsessive during a period of unemployment. This whole event has really swept me away. I've felt strange and on some kind of smut movie high for days. That could also be the head cold I caught from sitting confined place breathing the same stale air as 50 or so other people for 12 hours. Yuck. Totally worth it, and even perhaps fitting?

I'm going to try and review them straight through, as to not get distracted by other movies I may watch before I complete this task. Be sure to check back, I should have my review for Space Thing up before the night is over.

Posted by Scumbalina at 7:15 PM