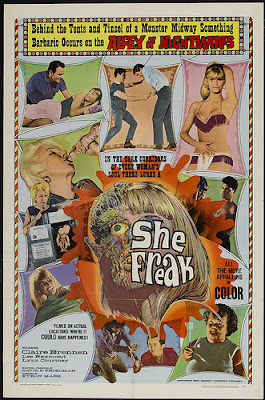 With David F. Friedman's background as a carny, She Freak could be considered his opus. He traveled with carnivals when he was a kid which gives us a lot of insight into his legacy. She Freak is about a small town southern Waitress, Jade Cochran, who wants a better life for herself. So she quits her job and starts waiting tables for a carnival food stand. Definitely doesn't appear to be much better but she's happy with the change of scene and the opportunity to travel. She meets a lot of people, including a burlesque dancer named Moon who becomes her roommate. She also meets a beefy tough guy named Blackie who runs the ferris wheel. She's instantly drawn to him. Jade inquires to Moon about the single men around the carnival, Moon describes a few eligible bachelors. The most appealing was the well-off Steve St. John, who runs the freak show. Jade is starting to show signs of her gold digging nature by instantly being interested in him because of his money. She pursues Steve (played by Bill McKinney, who spoke before the showing) and they begin courting. During this time, she also hooks up with Blackie for a one night stand. Uh oh! Our little midget friend from the side show see's her leaving his cabin late at night which is a good sign that there's trouble to come. 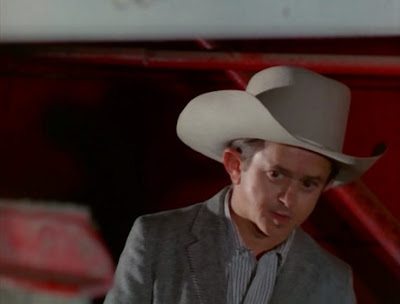 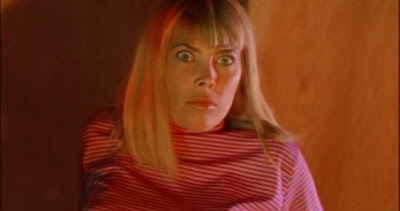 For fear of giving too much away, I'll leave the plot description at that. I'll just add one thing, if you haven't seen this, expect a blatant rip-off of Todd Brownings Freaks. That's not a bad thing though, it's a nice homage and certainly has it's own flair. One of the most interesting aspects of She Freak is the documentary style footage of carnival life. In between the story we're shown in great detail the routines of the workers, the vendors, the rides, the side-shows,the game booths, the food being prepared and even the tents and rides being taken down and re-built. Where as Freaks showed us how these infamous people with seemingly unlivable disabilities function, She Freak shows us the gritty lifestyle and occupations of your average carny folk. They even break down the lingo for us. 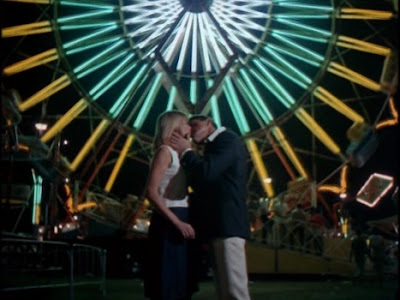 It's really quite a remarkable film when you look at the big picture. It's educational and the story is an pays respect to one of the greatest movies ever made. The acting isn't too bad in my opinion either. Claire Brennan does a wonderful job as the greedy, underhanded Jade Cochran, and Bill McKinney would go on to star in movies like the Outlaw Josey Wales, First Blood, the Green Mile and most infamously as Ned Beatty's redneck rapist in Deliverance.

She Freak is definitely not to everyone's taste. Even fans of b-movies might be a little disappointed. There is a lack of freaks in the movie, which is what the title is trying to sell you on. As I'm sure David F. Friedman knew when he made it, you can't please everyone. If you're interested in seeing a historical account of carnival life with a fairly entertaining modern (for the 60's) spin on Freaks, then surely check it out. 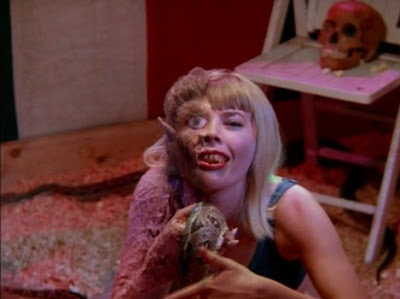 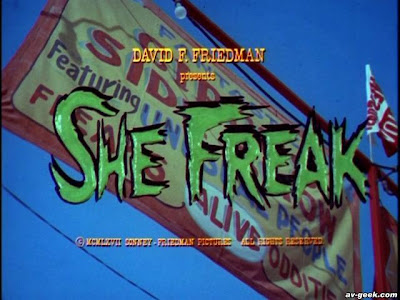 Stay tuned for my next David F. Friedman review! A Smell of Honey, A Swallow of Brine...
Posted by Scumbalina at 4:07 PM