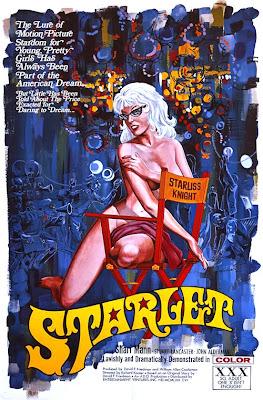 This movie felt like a swan song of sorts. The tragic end of the marathon and also somewhat cheekily autobiographical. Starlet is about the adult movie industry, more specifically the production of Nudies. A young devil-may-care softcore pornstress is easily swayed into going hardcore by her sleazy director Phil Latio (yep).  She sleeps her way to the top becoming more and more successful. The role of the sordid producer is played by Russ Meyer alumni Stuart Lancaster. He's got that whole slimy thing down pat. She has two roommates, one a slutty free love bleach blonde Liza Minelli look-alike who runs around in a short smock and no underwear AT ALL. Her other roommate is much more prudent. An "actress" who's ironically engaged to a smut director. She also has one of the weirdest birthmarks I've ever seen, I kept thinking there was spilled wine on her chest.

There's a lot of betrayal, hard feelings and general diva antics. Considering this was the last film in the marathon I was feeling pretty much rung out to dry. Completely desensitized to humping and hijinks, this marginally entertaining depiction of casting couch film making was about as un-sexy as Blood Feast. The acting is fair and the plot holds your attention but I was a bit underwhelmed with this one. I see what they were doing here and it was a noble attempt but next to Space Thing, Starlet is my least favorite of the bunch. Which makes sense because that would be book ending the festival with the weaker movies that only the die hards could bravely survive. 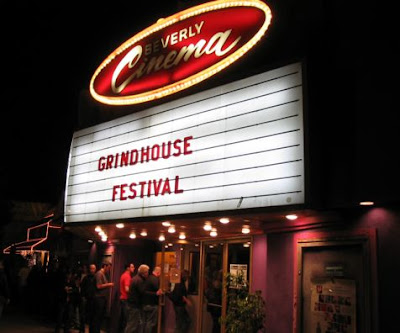 In summary, this event is one to be cherished. With it's ups and downs it was an over all success. An amazing turn out and a thoroughly entertaining experience I'm proud to be apart of. Honestly, I'm a little impressed with myself for making it through the whole damn thing. As I mentioned in my introduction, I've never watched 7 movies in a row before. Let alone in a theater in rapid succession. It made a man out of me and I have the New Beverly and the course the late David F. Friedman to thank for that. 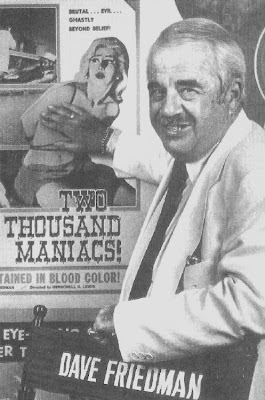