I really intended to have written more reviews by now. October is always overflowing with activities and yet I feel just as motivated to suffocate myself in the warm embrace of cinema. My goal was to continue watching horror movies, review the ones that stood out every few days or so, then dump the rest in one mini-review style entry. That's what this is turning out to be only it's covering pretty much the entire month. Despite my lack of updating I've watched a whopping 41 movies this month, not including dozens of silent shorts. I got kind of side tracked by a video project I did for a pop-up speakeasy called Sip Saturdays. I created a mash-up of silent experimental and horror clips. It was such a blast and forced me to finally watch lot of films that I've had on the back burner for years and also revisit some beloved favorites. But I'll come back to that...

The beginning of the month was filled with mostly underwhelming random movies I've had sitting around forever. I decided to just submit myself to them, this stacked against my Silent marathon made for a unique cleansing experience. The first horror movie I watched this month was Grave Encounters, which has firmly secured it's spot in the bottom five. But nothing could compete with the spectacle of suckery that the Slender Man achieves. One of the worst found footage horror movies I've ever seen (up there with Paranormal Effect, which I'm still recovering from). A total waste of moderately-interesting source material, because, let's face it. Eventually SOMEONE was going to make a Slender Man movie. If you want to see it, it's on youtube. I won't promote it by offering the link, you've been warned.

To fuel my already somewhat disappointing October, I decided to go see Annabelle. Partially because I wanted to see SOMETHING (anything really) horror related at the theater, but mostly because I'm a sucker. To be fair, it wasn't awful but it was far from remarkable. It shamelessly rip-offs Rosemary's Baby and the ending is totally worthless, but somehow Slender Man had lowered the bar so much I experienced some mild enjoyment.

The second week of October was dedicated to shot on video or direct to video demi-classics. Things I really should have gotten around to before my 29th year on this earth. Let's start from the top...

Something that's been on my list for a VERY long time. The rock n' roll themed horror movies of the 80's belong to an exclusive league of cool that is uniquely it's own. After seeing Hard Rock Zombies, Rock n' Roll Nightmare and of course the holy grail of the genre, Slumber Party Massacre 2, knew there was more to this. Rocktober Blood entered my peripheral vision in my youth and yet it has somehow evaded me until now. I don't hold it in as high esteem as the latter but with lines like "I want your hot, steaming pussy blood all over my face" it's deserving of being in the hierarchy amongst it's peers. 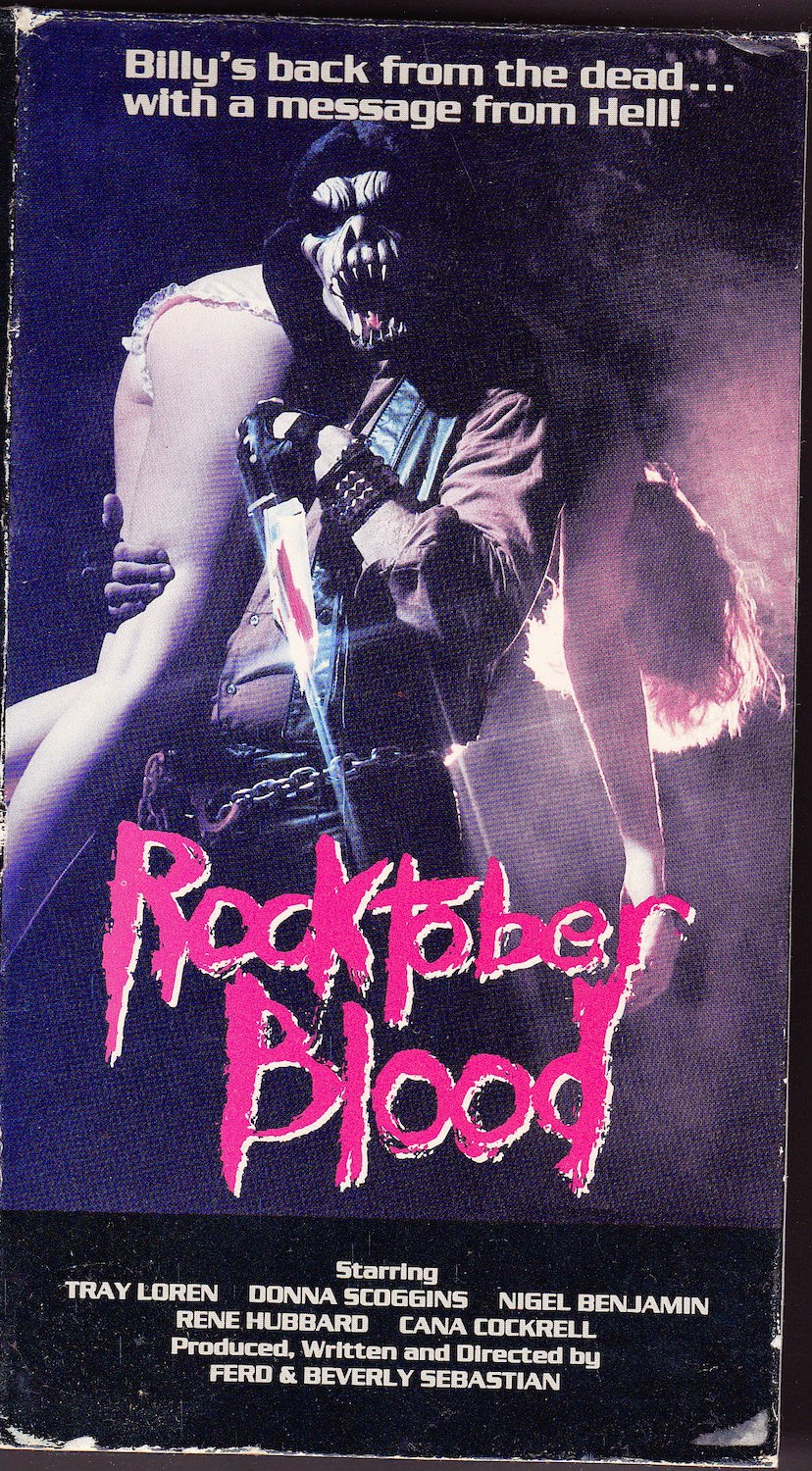 I enjoyed this as I was watching it but in retrospect, I remember almost nothing and it's only been two weeks. I liked the frazzled smoking wife and an Egyptian slant on any movie always makes it better. A bit too intentionally campy. I'm also not a huge fan of the cops-trying-to-solve-the-murder yarn. Unless it's Blood Feast, which Bloodsucking Pharaohs is obviously influenced by, A few interesting murder sequences but nothing to write home about. Honestly, nothing really to write in your blog about either. It's fair at best. Acceptable Halloween fodder but not worth going out of your way for. 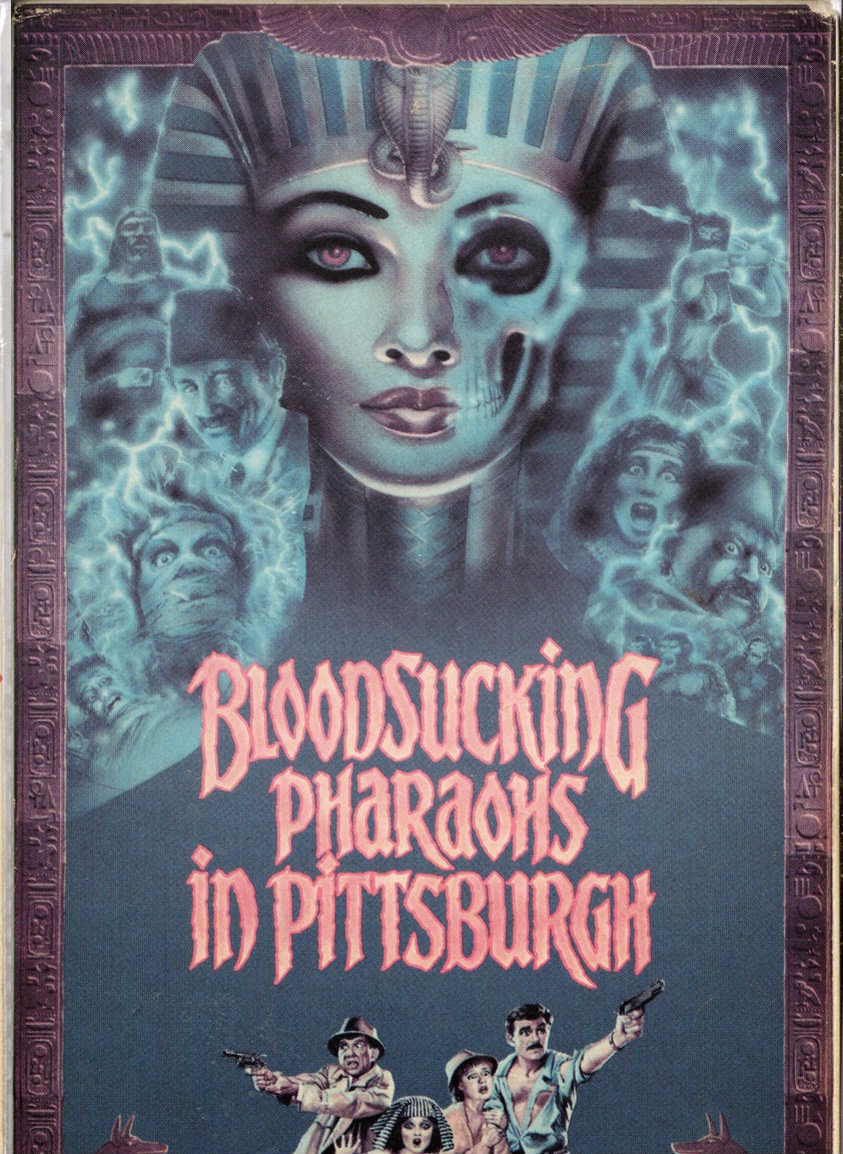 I don't really know what to say about Haunted-ween. It was a visual interpretation of the term "in one ear, out the other". It had a few moments that were simply OK, but I think this movie is the strongest example of mediocrity this Halloween season. A fraternity throws a Halloween party at a local abandoned haunted house (as in a haunted house themed attraction, not  an ACTUAL haunted house). It had been previously owned by a family that hosted the event every year until the youngest member, impaled and killed a girl. I'm sure you can guess where the story goes. The party materializes, murdering unfolds. The only memorable scene is the Grand Guignol inspired final act. Everyone THINKS they're watching a realistic Blood Sucking Freaks-esque murder show, while they're actually witnessing the crimes. Has some regional Kentucky fried charm, but missed the mark for me personally. The best thing about about the movie is that it's called Haunted-Ween, which will forever make me think of a haunted penis. 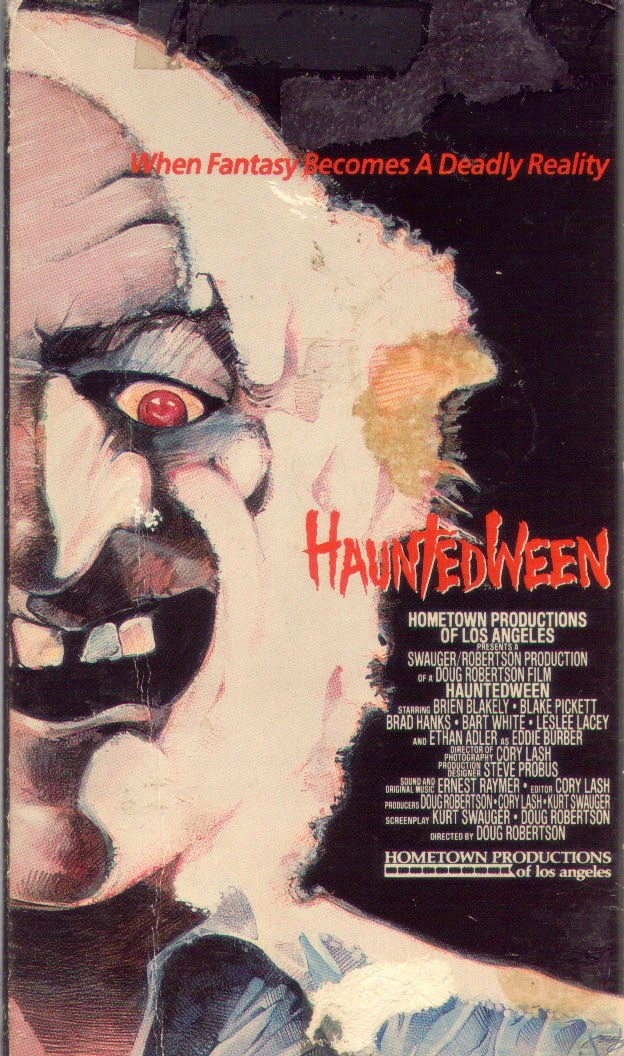 I had every reason to hate Demon Dolls. It's too long, aimlessly meanders, stars a cast of non-actors who I mostly want to punch in the face, possibly the most amateur of all the movies I watched this month and I hate that fucking puppet. I generally love doll related horror movies. Make it a clown doll? I'm in! THIS particular doll pisses me off. It just looks like shit. The first half of this movie had me cross-armed and flat-faced. I was so ready to hate Demon Dolls. I decided to turn it off for the night and go to bed early. The next day, I just wanted to get it over with so I could forget it. I made my coffee and aimed to have it as background noise to my morning routine. Then, something happened in the second half. It got kind of weird. Suddenly it became a Videodrome influenced inter-dimensional love story between the main character (Todd Jason Cook, also the director) and his girlfriend (played by his real-life wife, Lisa Cook, who he would put in a number of his movies). It toyed with some experimental imagery and effects. I got the sense that these two were just messing around in their house and having fun with it. Which I kind of like. Something about it was actually kind of sweet and having taken such an unusual turn I can't totally dismiss Demon Dolls. Also, looking around his room, the dude is clearly obsessed with Horror culture. It's plastered with posters top to bottom, then he shamelessly plugs a previous film of his. It's all very charming and home spun. I felt like I knew these kids. Won me over in the end. 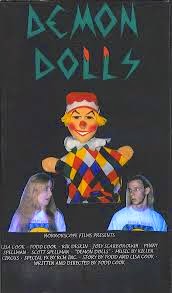 Oh dear. Where to begin. 555 has a reputation of being some kind of staple in a VHS collection. Out of print for so many years and with such an attractive cover, it was sought out by many. As a casual  collector (meaning I'm cheap. I won't spend exorbitant amounts of money on anything - vhs, dvd, books, records, wax cylinders, weasel fetus', whatever.), it never seemed pressing enough to spend the collector price to check out this movie. I waited; and while I felt it was a blight on my track record,  but now I'm glad. You see, 555 sucks. Don't listen to anyone else, listen to me. It sucks. That's it. End of discussion. Not in a cute, redeeming way like Demon Dolls. There's no passable pay-off like at the end of Haunted-Ween. It doesn't have a rock band or campy Egyptian culture. It DOES share that cops-talking-too-much yarn I mentioned earlier. That's all this is. Let's just TALK about murders for an hour and call it a horror movie. There are maybe five minutes of underwhelming horror sequences including the cover image that Wally Koz is so fucking proud of. What a jip. I can't imagine having spent any number of dollars on this and not feeling ripped off. I already feel ripped off and I spent nothing. Hugely disappointed. I would be remiss not to mention the slutty middle aged journalist. She needs to be acknowledged simply because they tried to sell that sexuality to we; the audience. I cannot. No primary characters in this film are more than a decade below geriatric. Don't let anyone fool you. 555 sucks. 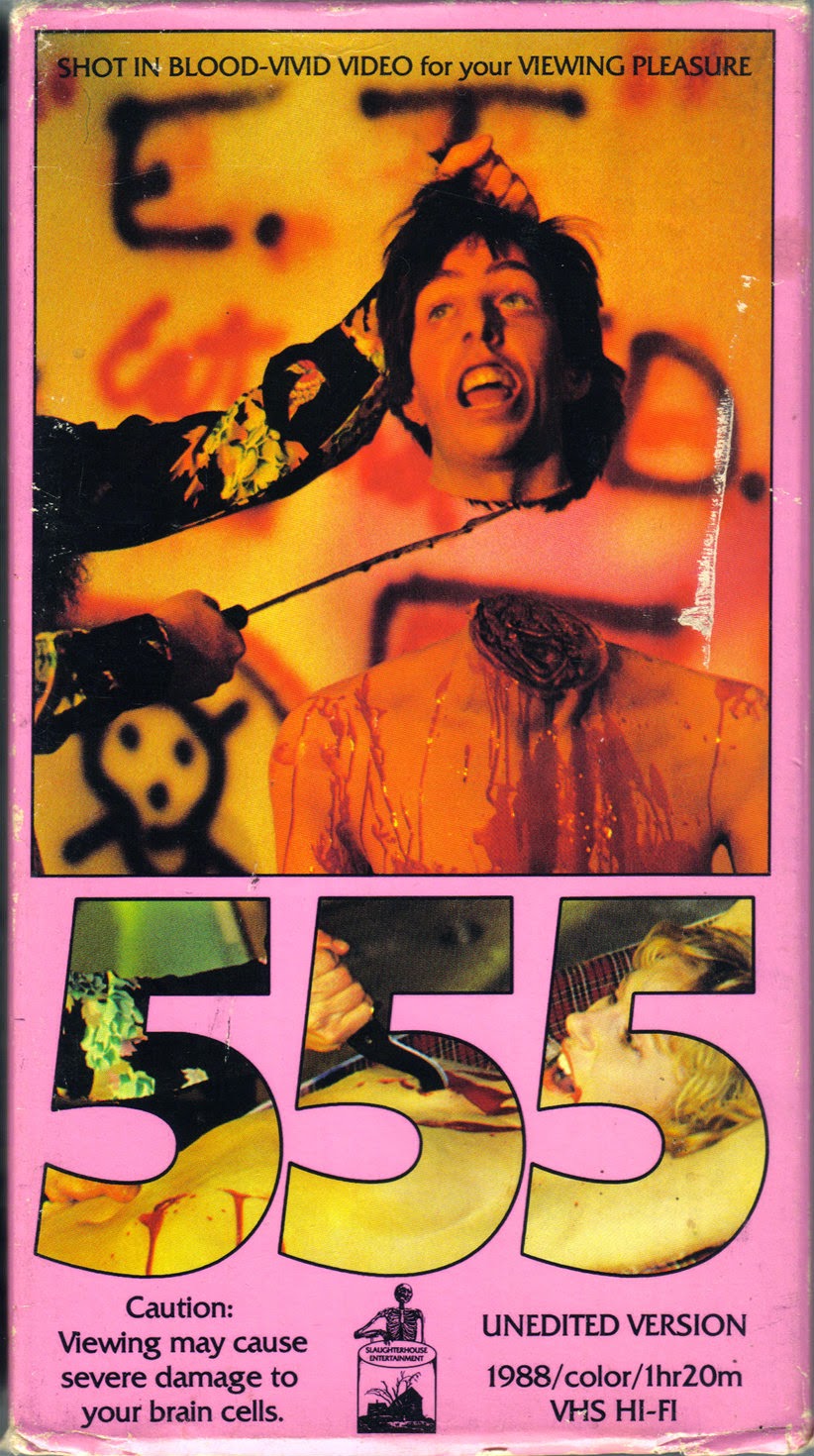 This has been the year of 2 1/2 - 3 star ratings. Most of which I didn't hate but there have only been a few that I truly love. I rewatched some classics, notably Cabinet of Dr. Caligari. I say notably because it leads into my silent period, a breath of fresh air after the 555's of the world have inflicted their insubstantial garbage waves into my noggin.  As far as the rest of my silent excavations go, I have SO much to say, I've decided to reserve it for a second entry. And there are still a few films I've promised myself to dedicate full entries to because they deserve obsessive VLC screen grab treatment. A few notable movies I probably won't have time to cover include Death Laid an Egg, Die Die My Darling, I Drink Your Blood, Nightmare Beach, Absurd and the Death Nurse films. The latter I DO plan on covering some time in the future in a big Nick Millard tribute I'm tentatively planning. But I don't know why I'm tell you all of this right now, see you in part 2!

Posted by Scumbalina at 9:22 PM