When I found out about this movie I pretty much flipped my shit. All of the proper elements were in place. It's from the 60's, it's Czech, it's obviously some kind of children's fantasy story and best of all it features a A CAT WEARING SUNGLASSES. Not just a cat. A MAGICAL cat. Not just sunglasses. MAGICAL sunglasses. This is more or less the selling point of the film for anyone with a heart. A magical cat, his magical sunglasses. End of story. How could I NOT obsessively need to see this? As a person who can spend hours looking at websites like this. (yes, hours). It became a moral imperative to track it down. 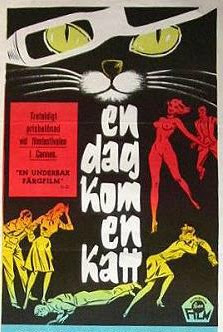 While the film may appear to be a cat lover's enchanted dream. It's mostly about a teacher named Robert and shenanigans of his small town life. His boss, the school director is a heartless jerk who kills animals for taxidermy. His girlfriend appears to be having an affair with the the school director. One day in class Robert brings in a friend to inspire creativity in the children, local wise-old-man-type, Oliva. He begins telling tales of his past and his encounters with a beautiful girl who had (...here it comes...) a magical cat that wore sunglasses. She told him never to take off the glasses because if they were removed the true feelings of everyone around him would be visible by their glowing color. Red is for lovers, Yellow is for cheaters, Blue is for jealousy and grey, perhaps worst of all is for the "average" person. Someone who lacks character and emotion. He then goes on to explain that such a dramatic reveal of individuals makes them go crazy. They went after the cat and killed it. Just as you're ready to throw your shoe through the screen outraged by such a terrible story of magical cat murder, we hear music in the distance. A circus is coming to town, and it appears to be a mysterious and extravagant one. Front and center is a magician who looks EXACTLY like Oliva and a beautiful girl holding a cat wearing sunglasses. What are the odds? You'd think this was a movie or something. 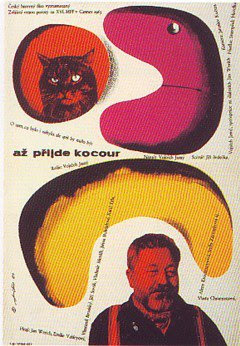 That evening the show begins. It's filled with ballet, pantomime, smoke, mirrors and obviously a little bit of magic. This whole scene is just phenomenal, and well worth sitting through the entire movie for. Clothes with no people in them dancing a choreographed vaudeville. The beautiful Diane appears in her red leotard and literally floats up to the trapeze where she sits admiring the audience as if she had a secret. As she swings, so does the music. It lifts from a lilting ballet to a jazzy number. The magician snaps his fingers and all these cats appear in mid-air! He snaps his fingers again, and a disapproving audience member joins them. 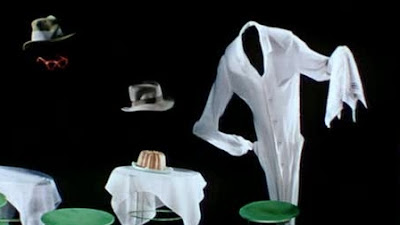 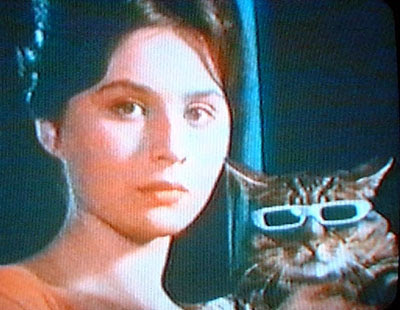 In another snap of the fingers, Mokol, the magical sunglass attired cat is rolling himself in mid-air towards Diane on a ball like some kind of fashionable mystic acro-cat. Then Diane does the unthinkable! She removes Mokol's glasses. The lights go down and his eyes begin to brighten, suddenly there are glowing red lovers dancing. The crowd scatters as one by one they start turning their "true colors". Violins swell while blue wives tug on the sleeves of their yellow husbands. Some people are rapidly changing colors to show that they are conflicted and unstable. A panic ensues and after Mokol has disappeared, they all want to track him down to destroy the creature who revealed their true identities. 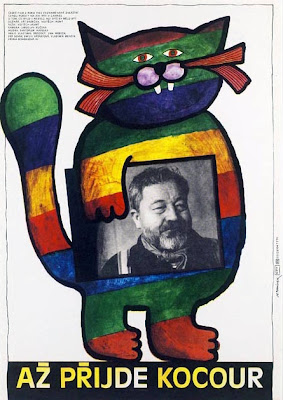 Since this all takes place fairly early on you'd think this would set a nice tone for the rest of the film, but this point it's mostly personal dramas and extended exposition. Most of which didn't interest me much, especially after the second viewing. In fact you see very little of Mokol through out the rest of the film. Robert, his budding romance with Diane and figuring out how to stand up for himself becomes the primary driving force of the film. Perhaps it was always supposed to be? You mention magical cats wearing sunglasses and I tune everything else out. 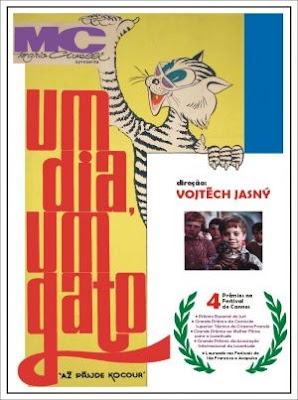 Like most Czech New Wave films, the Cassandra Cat uses an abstract and psychedelic atmosphere as a building block to subtly showcase the oppressive ubiquity of the communist government. Often these films illustrate nonconformity in a paradigm of subversive fairy tales. The end result is something timeless that both adults and children can enjoy. In this case my inner child was demanding more cat magic, but that didn't distract much from enjoying this marvel if a film. The scenes that are beautiful are so attractive that you might think you're watching a Powell and Pressburger film. The music is a big part of it too, like Leonard Bernstein meets Zdnek Liska. 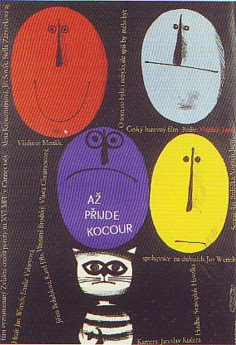 While watching this movie I was reminded of an 80's kids movie called the Peanut Butter Solution. It's a cheesy straight to video, considerably bad by most standards, Canadian movie about about a biy who gets "a fright" and loses his hair. Two ghosts show up and offer him a solution (made from peanut butter no less) that makes hair grow where ever applied. They warn him not to add too much PB or he'll suffer the consequences. He does, of course and as a result his hair won't stop growing. All day long it just grows and grows. An evil art teacher catches whim of what's going on so he kidnaps the boy, and basically ever other kid in town, to make a paint brush sweatshop using the never ending supply of hair at his disposal. The paint brushes create magical paintings you can jump into. This movie is so awesomely bad, I've considered reviewing it but I haven't had the opportunity to give it a fresh re-visit. Something about the Cassandra Cat reminded me of Peanut Butter Solution. The pacing, the madcap and the absurdness felt so familiar. Come to find out, Cassandra Cat director Vojtech Jasny wrote the Peanut Butter Solution some 20 years later! I don't necessarily recommend one if you love the other, PBS is a SUPER acquired taste but I suppose if you're really into weird kids movies, it's worth a shot!


The Cassandra Cat is delightfully elegant and oddball film that deserves better treatment than the dollar bin slim case double feature release it has here. But then again, so do a lot of under appreciated Czech films. I'm still anticipating a Karel Zemen boxset that will never happen. As these things go, we take what we can get, and if you can get the Cassandra Cat it's well worth the trouble. 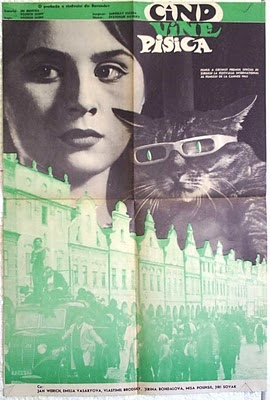 Posted by Scumbalina at 5:32 PM