I've never been a huge fan of true crime. The starkness of such subject matter is a little too impolite for my taste, even as a horror fan. Reality is not fun and the world is a terrible, terrible place. That's why becoming attached to movies like Blood Feast and Slumber Party Massacre 2 is so easy. How relatable are Fuad Ramses and the Driller Killer? They're practically cartoons. People who actually go out and do awful things to other people do not interest me. That being said, since art mimics life naturally a few movies are going to pop up that are based on or heavily inspired by a real life monster. I may not hero worship Ed Gein like some people, but that doesn't mean I can't appreciate the 1974 film Deranged. You get what I'm saying.

I might not have given this one a second thought, but lately I've developed a huge crush on dvd distro Intervision. It started when I decided to rent Sledgehammer, an other worldly "slasher"(?) about a ghost killer with a ghost sledgehammer. It crescendo'd after I saw "Things", a 1989 Canadian horror movie that defies any kind of rationalization. It's from another planet. The same planet Death Bed: the Bed That Eats is from. Both of which I intend to review (still catching up on my list!). After those two I knew I needed to just blindly purchase anything this life changing company throws my way. After viewing the trailer for The Secret Life: Jeffrey Dahmer I decided that it had potential so I decided to put my faith in Intervison and give it a look. 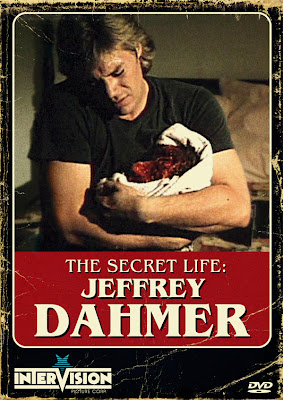 Already knowing the basics about Jeffrey Dahmer, as anyone the planet would, it made it difficult for the movie to surprise me. Reality is a spoiler in true crime horror movies. It's all very straight forward. It's a bit repetitive since most of it is him performing his little bait and switch routine. Offering men money to take their picture then slaying them in a cornucopia of plenty. Objectively, there are some good kills. Feets on fire, tenderly requesting permission to decapitate, offering bounties of drugged meatloaf sandwiches. Carl Crew plays Dahmer, despite his over acting I thought he did a pretty good job. He definitely looks the part. More than anything he made me want to rewatch Blood Diner.

This film wasn't spectacular but it did have it's moments.There are three moments in particular that I hold dear to my heart. The first being the scene on the cover of the dvd. Imagine romantic midi piano music while Jeffy lovingly cradles a freshly severed head. He whispers sentiments of eternal love and foreverness. It's an appalling spectacle of enchantment. I also really loved his apartment. Skeleton n' shit everywhere, in practice and in artistic taste. Simple, but metal.

Another is finding out that much to my surprise (thought maybe I shouldn't be) Jeffrey Dahmer was a Herschell Gordon Lewis fan... 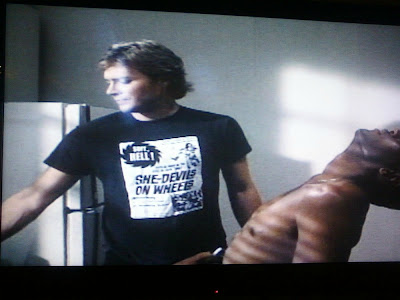 Or maybe it's just Carl Crew? Between this and Blood Diner. Either way, he should give me his shirt.


Lastly and most importantly.... 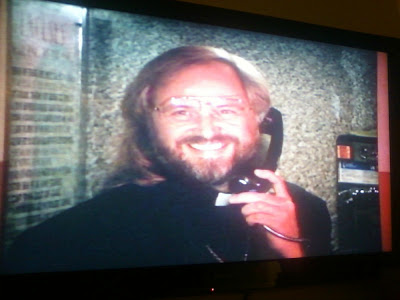 For no apparent reason at all this Barry Gibb clone appears in a bar and calls Dahmer from a payphone, harassing him with his menacing grimace and awkward silence. Then nothing... That's it... No more Gibb. WHY DID THIS HAPPEN??? Dahmer was offended, even I was offended. But I want more. Where has he been all my life? I didn't even know what to look for in the credits. "Person Who Looks More Like A Serial Killer than Jeffrey Dahmer"? Truly one of the world's greatest mysteries.


Overall despite my hang ups with true crime The Secret Life: Jeffrey Dahmer force fed me enough cheese to be constantly reminded that it's all just a little bit of movie magic. It didn't speak to me on the same level as Things or Sledgehammer, but it's a nice slice of  Intervision love to stave off my hunger for today. Seal of approval granted. And I promise more reviews of it's distro brethren in the near future!
Posted by Scumbalina at 2:43 PM