My exposure to Russian Fantastika has been mostly limited to the fairy tale variety. It always seemed like a very adult decision to watch Soviet sci-fi films. Perhaps because of the tonally somber world of Tarkovsky, which has been at the center of my minimal experience with the genre. To The Stars By Hard Ways has been in my line of vision for several years. The appearance of the female alien/humanoid was alluring and the general atmosphere seemed to speak to my imagination. I made a mental note that this would be the Russian Sci-Fi film to catapult me into the genre. 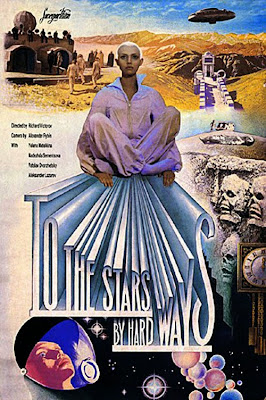 I would pay so many rupees for this amazing poster. I can't even.


Now, time to back track a bit. Last year I went on a trip to Big Sur with my Mom and Step-Dad. We spent the days hiking and beach combing and the nights drinking whiskey in the cabin. I wanted the experience to be somewhat magical and otherworldly so I aimed to set the mood with through the tube. I showed screened Fantastic Planet, a first time view for both of them. They seemed to enjoy it but it was never mentioned again so I really can't be sure. After they went to sleep I watched Karel Zeman's On a Comet, a fantastic hand-made looking underrated science fiction classic, much like everything else Zeman did. Both films left me with just the right feeling of whimsy on my coastal vacation. This year upon return I wanted to re-create a similar experience. It didn't quite play out the same way, we were in a different cabin (more modern and less Paul Bunyan-ish), the parents were totally disinterested in being near a television but I felt determined to at very least simulate the extraterrestrial feels. Basically, my first visit has forever made me associate Big Sur with an Alien Planet, and I want to pretend I get to visit a new planet every time I'm there. This year To the Stars By Hard Ways was my vessel. I know I'm taking the long way around beginning this review, but some movie adventures are more diary-like than others, as are some bloggers. I am one such blogger. Deal with it.

Now that I have set the scene for you, I should add that the film didn't even get a proper viewing in Big Sur. It was on, it created the alien-scape I wanted but there were many distractions. The ins-and-outs of being drunk with family, eating lots of food, playing tag with Otter, the inevitable rolling around the floor like a burrito because you drank half a bottle of absinthe and of course enjoying the ACTUAL alien-scape that IS the coastal region. I re-watched it when I returned to Pasadena, with my undivided attention.

The film opens with the discovery of an Alien spacecraft which upon exploring is filled with lifeless floating humanoids. One striking female-like being is safely encased in a space suit. The astronauts rescue her from the tomb and her origins are immediately in question. She's identical to her deceased co-pilots and appears to be suffering from some kind of post-traumatic stress induced amnesia. Scientist, Sergei Lebedev volunteers to let her live with him in his amazing space-age Russian cabin with his mother, father and adult son. His thoughts are that it would be healthier to study her as a human rather than coldy in a lab as a robot. Sergei wants her to feel welcome and comforted while they figure out where she came from and what caused the explosion that lead the the demise of her brethren.

While she's fearful of certain aspects of nature such as water and grass, over all she adapts quickly to family life and takes on the name Niya. As she begins acclimating to society, more of her innate differences begin to surface. She has super human speed and can move things (or prevent things from moving) with her mind. Upon further study, it's discovered that she has a device in her brain that renders her controllable. This establishes that she is in fact the creation of a third party. As these experiments are coming into play, she recalls fragments of of her past. A father-like inventor who cloned many little Niya's; though the purpose was still unclear. It's not until members of her home planet Dessa, come to earth that the big picture begins to take shape.

Niya and her brothers and sisters were created as a kind of super being to help revolt against an evil industrialist who has capitalized on Dessa having become a dystopian wasteland. The air is unbreathable and the water unclean. The pint sized villain sells clean air to those who can afford it, while the others live underground, forced to wear weird creepy grinning masks and spawn deformed babies. Niya and her astronaut pals must step in so that she can fulfill her destiny to make Dessa inhabitable once again.

I've read  lot of mixed reviews for the film, most surprisingly slanted on the negative side. While it's certainly not without a touch of camp, I cannot overlook it's mastery. While not only being a photographic opus, To the Stars is a proverbial promenade of visual variety. Architecturally interesting, highly design conscious and seamlessly uniting light-hearted matters with dramatic themes. The atmosphere moves from cold and clinical to an intimate warmth. It doesn't aspire to be any other sci-fi film that I know of, though as I previously stated, am a novice to Russian Fantastika. When I say this what I mean is that it is not trying to be Star Wars or Alien. Perhaps tinges of 2001: A Space Odyssey, but then again Stanley Kubrick cited Fantastika forefather  Pavel Klushantsev as a technical influence.

A few things I can possibly attribute to the film's cheese-ball reputation is that it feels a bit older than it is. I was surprised when I found out it was released in 1981, my guess would have been somewhere in the early 70's. This doesn't bear any weight on my affections for it, simply an observation. Secondly and most infuriatingly, it was given the MST3K treatment. A poorly dubbed, badly edited version known as "Humanoid Woman" was released in the states. I can only imagine how mistreated it was, and once in the hands of arrogant space puppets, you can pretty much guarantee that future mainstream audiences will forever hold it in the guillotines of "Bad-Film-dom" along with every other movie those guys have ripped on. I'm fighting the urge to rant on this matter, but it's neither here nor there. It's a funny show and I definitely enjoyed it when I was a kid, but some of those movies are GOOD and I don't need an abridged version with a shadow puppet commentary, perhaps as an afterthought but not as an introduction. I'll just leave it at that.

Let's talk about the breathtaking Yelena Metyolkina who plays the Humanoid Woman. Even considering the films minute flaws, it cannot be denied that Yelena delivers a powerful and magnetic performance. Her beauty is truly captivating in an alien-like way. While watching the film I must have taken at least fifty screen shots of her strange, lovely face. It's no surprise that she was a model before making her film debut in To The Stars By Hard Ways. I could just stare at her for hours. I found little information about her, but I did stumble upon this weird youtube video...

A decade or so ago director Richard Viktorov's son "remastered" and re-released the film with some strange tweaks such as some out of place CGI, lame-as-fuck modern electronic music and for whatever fucking reason REMOVED 20 minutes of the film. Simply because it's the only version I could get my hands on, this is the one I watched. I noticed these weird ebelishments and totally could see that they were a recent addition. I'm just surprised it was Viktorov's own son who committed these crimes. The silver lining is that the film is still a celebrated cult classic in Russia. High production value and a still-relevant ecological message, I'm certain this film will one day receive a proper release. I'm lookin' at you, Criterion.

And now, photo dump - with commentary - of amazing screen shots I couldn't fit into the rest of the review.

That man is wearing a fez. Worth noting.

I'm kind of obsessed with their futuristic rustic mansion.

I say rustic because the inside is a log cabin.

They have a house robot who plays tennis with them.

And serves tea on it's head.

Here's a good example of the awful digital additions made by the director's son. I'm really confused about that big guy in front who looks like he's wearing modern clothes. Looks like something out of a new Ted V. Mikels movie.

Then there's this whole side story with the alien octopus that's afraid of cats. Campy and probably unnecessary, but I love it.

One of the best shots in the film. Dali-esque.

And then there's this.

On that note, I will leave you. See you in the stars!
Posted by Scumbalina at 12:48 PM