Lately the fairy tale films of Russia and Eastern Europe have been greatly influencing my personal viewing cycle. I simply want to be surrounded by dancing forest animals, sprites, chicken legged witch houses, werewolf servants and , sure - why not - "Rölli's". I went into Rölli - Amazing Tales blindly, knowing nothing except that the appearance of the leading troll creature fits in with an aesthetic that I crave. 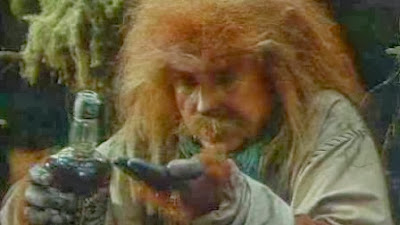 "Rölli" is an impish little forest dwelling man-beast who romps around with false bravado, attempting to scare and intimidate other critters. When he encounters a Forest Fairy his soft nature is revealed when he saves her from an attack from a "BIG Rolli" (Rölli is not only his name but his species, somewhat confusingly). After this a friendship forms, they pair off for the duration of the film. Generally speaking, the movie follows a somewhat generic straight-to-video kids movie approach. Despite having some cool costumers here and there, it's not terribly artistic or moving. It has an eco-friendly "take-care-of-mother-earth" agenda, and honestly doesn't have much to offer an adult audience. 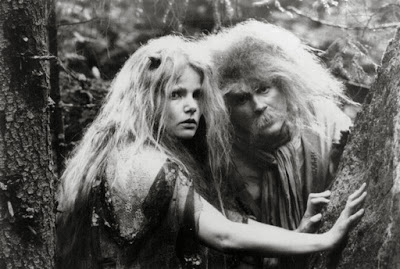 When I first turned it on I could have SWORN the title theme was sung by Nina Hagen. Sweet and feminine one minute, then hitting this strange goblin-eque notes of terror in the chorus. I was so convinced that I made up my mind at that point that the film was automatically the greatest thing ever. A premature summary to say the least. For starters, it was NOT Nina Hagen, it was the two main characters, Rölli and the Forest Fairy (hence the sweet and feminine with the guttural troll pipes). Also, I realized that wouldn't have made sense anyway because Rölli is Finnish and Nina is German, oy! The character of Rölli is the creation of Finnish singer, Allu Tuppurainen. He went on to play the character in various forms on stage and screen. It of course only makes sense that he wrote and performed all of the songs too! 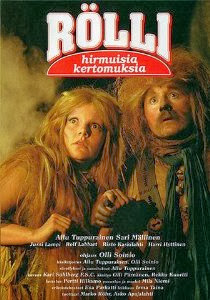 I sadly was just not terribly impressed with Rölli - Amazing Tales. I so wanted to be but perhaps I have become spoiled by much greater films from that area of the world. Very little depth or complexity on any level, and for the genre there was far too little magic and enchantment! Quite literally a throw away fairy tale, aw shucks...

Posted by Scumbalina at 4:05 PM