With 2012 coming to an end in just a few short days, I've been trying to cram as many movies as I can in to this feeble little time slot. 2012 was really an off year for me movie-wise. It's kind of a bummer. I don't want to reflect on too much, but I'm rounding off at somewhere in the 220-230 movies-watched-this-year-range. Normally I come much closer to my goal of 365, or at very LEAST I make it to the 300's. I got some cool movies for Christmas and had the urge to have a little Holiday Horror marathon. I ended up watching the remake of Black Christmas. Now before you close your browser never to return, allow me to explain. Like many of you, watching the classic 1974 Bob Clark original is apart of my Christmas regime. It's genius on so many levels and needs no further explanation. I made up my mind to skip it this year and focus on a few others so that NEXT year it will be a more refreshing view. That being said, I saw the remake when it came out and really didn't think it was as bad as everyone else did. Sure, they took A LOT of really absurd creative liberties. It can't match the original, nor should anyone expect it to. But I do think it retains a certain camp value that should give it a bit more critical flexibility. Also, the casting was forgivable. Especially with Andrea Martin coming back to play the house mother. Ok, it's not a master piece, I'm not trying to overly defend it, BUT...it's not without it's charms. I enjoyed my first viewing and I enjoyed revisiting it this Christmas season. 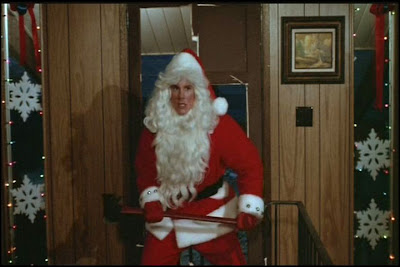 I watched Silent Night, Deadly Night for the first time this year. Which is a little embarassing, and I'm not really sure why. I've seen Silent Night Bloody Night (in all of it's suckery), which I always confused it with but somehow it just never worked out where the opportunity presented itself. So I watched it, and enjoyed it. I thought it drug out a little in between witnessing his parents being killed and him growing up to be the Santa Killer. Just a lot of filler, but it was a good solid slasher. A few laughs, a few "ewws", and Linnea Quigley's tits. Everything was as it should be. I'm glad I finally saw it.


THEN...immediately after, I popped in the second film. For those who don't know (which was me two days ago), the second film was meant to be an alternate version so literally half of the movie is footage from the first film. The other half, is the now dead Santa killer's little brother Ricky, in an asylum narrating the story to a psychiatrist. This film is of course infamous for the immortalized "Garbage Day" scene. That's pretty much all I knew about any of these films before a few days ago, other than that they exist. Having watched both, I wish I'd just skipped the first one completely. That way I'd have seen the highlights and all the good kills from the first and then the hilarious thespian stylings of Eric Freeman. Basically, the second totally trumps the first and I have no reason to ever watch it again. Sadly, the viewing was kind of ruined because I was annoyed that I had to rewatch it all back to back. c'est la vie. 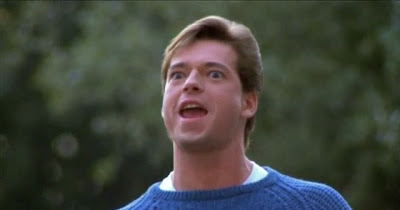 And finally, to end my lackluster, half assed Holiday Horror marathon I ended with the third Silent Night Deadly Night "You Better Watch Out!". Which was, for the record, my favorite of the three! Not only does it have nothing to do with Christmas but it's also a veritable David Lynch casting call. First, we have Richard Beymer aka Benjamin Horn from Twin Peaks, then there's Eric DaRe who's also on Twin Peaks as Leo Johnson, and playing his girlfriend is none other than Laura Harring better known as Rita from Mulholland Drive. WOW. This revelation shocked me as one character after the next entered the screen. One actor, maybe even two could be a coincidence, but THREE? I dunno, man. There's gotta be something there. Maybe Lynch and Monte Hellman are good friends? I looked but couldn't find a definitive explanation for this phenomenon. At any rate, even the film felt Lynchian. More specifically, and just not because of the cast, Twin Peaks-ian. Filled with melodrama, soft lens long shots and an eerie performance from Bill Moseley (always a pleasure!) as the brain-exposed-garbage-day-guy Ricky. The dream sequences were very Black Lodge and the the ending was classic 'what-the-fuck-typical-asshole-lynch-fucking-my-world-up' shenanigans. Am I biased towards the film because of it's Lynch connections? Yes, probably. But I also think it's the most stylish and dream-like of  a the three films. Had it been marketed and approached a little differently it could have easily been a stand-alone film. 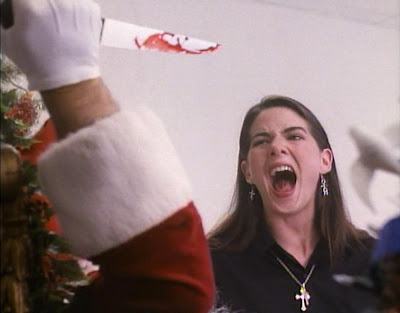 I didn't make it to #4 and #5, and I wanted to revisit Jack Frost and it's sequel. Not to mention Santa's Slay, Santa Claws and Satan Claus. But there's always next year! And I'm happy to have finally put a big dent in that Holiday Horror blind spot.

Cheers!
Posted by Scumbalina at 9:19 PM