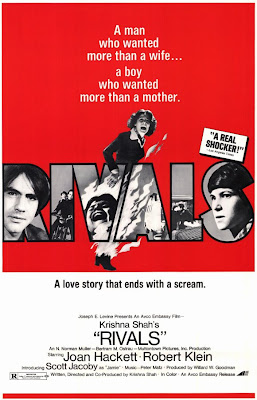 My interest in Rivals was aroused when I realized the leading child actor was played by none other than Scott (Bad Ronald) Jacoby. As I would soon find out, he's just as big of a creepy weirdo in this unsung masterpiece of WTF Cinema.

Jamie is an awkward 10 year old kid who has an obsessive relationship with his Mom. His dad died in a skiing accident and ever since Jamie can't stand the site of another man around and appears to be trying to fall into the role of husband. Not completely abnormal, but on top of all this it's made clear he has an above average IQ and obviously an accelerated awareness of sex. He's constantly having these Freudian flashbacks of being in the bathroom with his parents, over-hearing pillow talk, and even a disturbing conversation where his Mother is discussing with a friend that his birth was like an orgasm to which the friend suggests if it was a sexual experience for her it must have been a sexual experience for Jamie. I think she's onto something there, this kid definitely has some sexual hang ups. 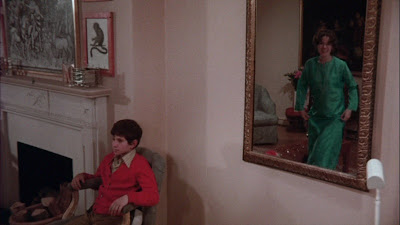 Then the Mother, Christine (played by Joan Hacket) meets Peter, a charming Robert Klein. He's impulsive, goofy and crazy about her. They begin dating, but for months Christine won't take Peter home or tell Jamie about this man she becomes involved with. By the time she she decides to break it to Jamie, the two have already decided to get married. Jamie immediately starts displaying jealous and aggressive behavior. This kid is clearly disturbed. He has dreams that are combinations of dark orgies and re-living his father's death. He talks to kids at school about sex in a very advanced way, and even gets himself into a bawdy situation with his babysitter (to say the least). 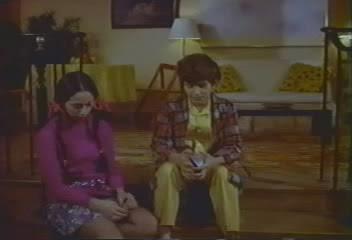 He obviously suffers from a textbook Oedipus Complex and displays symptoms you'd read about in Psychopathia Sexualis. Then he comes to the conclusion that the only way to take control back is by killing his stepfather. I won't give away the outcome but you can be sure to expect a fiery climax.

Rivals is all over the place. Based on the title and knowing relatively nothing about it, I assumed it was a typical child vs. step-parent movie only perhaps a bit more lurid. I should have known better with Scott Jacoby's involvement. In fact now that I've seen it, "Rivals" is kind of a misleading title. Robert Klein's character is pretty laid back, so there isn't a whole lot of rivalry going on. The mother is constantly molly coddling her pre-pubescent son, and she really doesn't know what to do with him when he acts out. It doesn't bother Peter until she hastily cancels vacation plans without talking it over because of some school problems Jamie's having. The stepfather is treated like the child with no say-so while Mother and Son have their own personal and awkward quality time. Peter exhibits an amplitude of patience with both character's adjustment and receives nothing in return. Christine is too fixated on her son's immediate well being to see the big picture. Jamie however, being one hell of a smart kid, had complete insight into what was happening. Unfortunately his Mother unintentionally continued to cater to her son's warped frame of mind which didn't do anyone any favors. 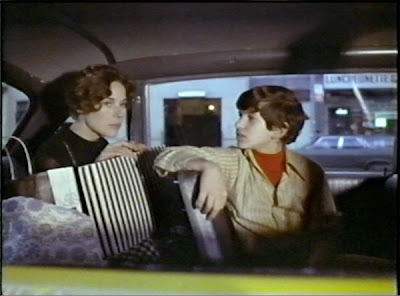 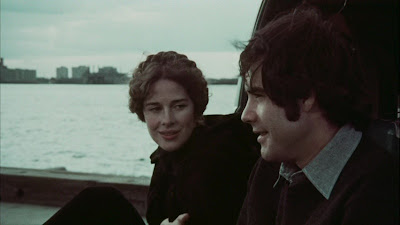 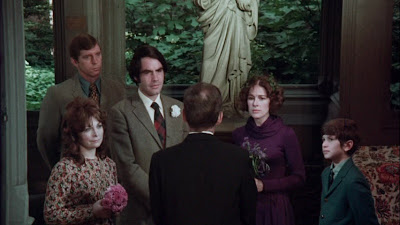 There were a lot of interesting editing and musical choices. Many scenes reminded me of old episodes of Sesame Street. Montages of people, particularly kids, playing and goofing around in New York set to very jovial and jazzy children's music. Then for Jamie's flashbacks or dreams the editing would get choppy and the audio was a collection of experimental music and sound clips from his distorted memories. 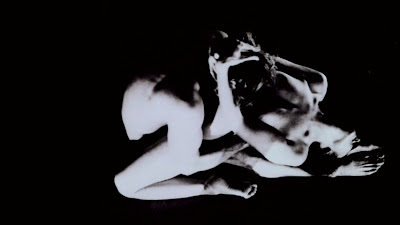 Although there was much subject matter I found disturbing in this film (kids and sexuality can make for an uncomfortable viewing experience), it was also immensely fascinating. Like watching a Norman Bates in the making, or Bad Ronald for that matter. I can also see why this movie has faded into obscurity. It's very eccentric and perhaps a little uneven. It never quite found it's audience, not even it's cult audience as it would seem. It definitely deserves a closer look. A few years ago Code Red gave it a nice release. So if you're interested, pick up a copy and give it a spin. I think it's time for Rivals' revival. Posted by Scumbalina at 4:41 PM