Since today would have been Peter Lorre's 107th birthday I decided to celebrate by watching a few of his movies I've had laying around. I'm not sure if I've ever broached this subject on my blog but Mr. Lorre is easily my favorite actor. Not only because I have a huge lady-boner for him , but also for his magnanimous screen presence. He's stolen the show in every movie he appeared in, even if the part was small.  There's a reason Charlie Chaplin referred to him as "the greatest living actor". Sadly many of his best films haven't gotten much attention. Of course we all love M, as we mother-fuckin' should! As a result of him being a "character actor" he was often limited to small roles with minimal dialogue. He's best known for his miniscule part in Casablanca which I'd hardly say challenged his incredible acting range. Then there's Mr. Moto, which is my favorite of the white-person-who-clearly-is-not-asian film series' that were popular at the time. Even when he got old and toady he still did wonderful things of the spooks run wild variety for Roger Corman alongside Vincent Price and Boris Karloff. Any way you dice it, Peter Lorre is an international treasure. His life and work should be celebrated, and his birthday a national holiday! It will be for me anyway... 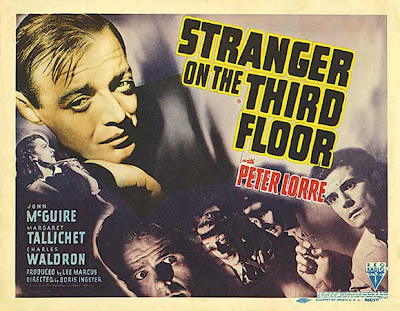 To get the ball rolling I started with Stranger on the Third Floor. A low budget RKO noir thriller about a journalist who witnesses the aftermath of a murder. He walks into a diner to see the owner with his throat slit and a man standing over his body. The man claims that he found him already dead but the journalist, Mike Ward (played by John Maguire) takes for granted that he must be the killer. Despite a very convincing argument, the man is arrested and put on trial for murder. Mike's testimony may put an innocent man on death row. Filled with moral qualms he goes home to see a strange man lurking around his building. When he attempts to ask the man what he's doing, the bugged eye Peter Lorre runs away. Shortly after, Mike realizes that his constantly snoring neighbor is dead silent. He convinces himself that his neighbor has been killed by the intruder and that he will be the prime suspect. We're shown several flashbacks of Mike and his neighbor exchanging words, particularly when the neighbor rats him out for having his girlfriend over and Mike threatens to kill him in front of multiple people. He slips into a state of dementia where he has this Kafka-esque dream of being on trial and no one believing that he didn't do it. No one believes that there was a "stranger" at all. When he awakens, he's completely distraght and decides that he has to know if all of it is in  his head or not. He barges into his neighbors apartment to see his throat slit in same way the owner of the diner. This validates his prior freak-out so he impulsively decides to skip town. He calls his girlfriend Jane to meet him in the park to give him some money. Thankfully, she talks some sense into him. He calms down and decides to do the right thing and call the police immediately. The police and DA have an element of doubt but they still heed his warning and follow up on his description, but it's not until Jane goes out of her way to seek this sad eyed villain that any headway is made in the case. 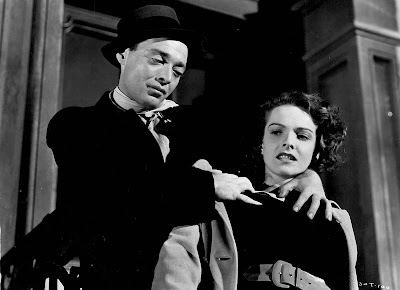 My first complaint about Stranger on the Third Floor is a major lack of Lorre. He doesn't have his first line until the last 15 minutes of the movie and before that we only see him creeping in the shadows and peaking around corners. Although that's where I'd expect to find a Peter Lorre character I was hoping to see more of him in this film. I found myself losing interest in Mike and Jane's romance. John Maguire's nightmare sequence was pretty interesting, but with this film falling right over the one hour mark and having very minimal Peter Lorre screen time it falls a bit short at time. However, this is known to many film historians as the "first" noir film. On top of that the art direction was done by Van Nest Polgase who would go on to do Citizen Kane the next year. 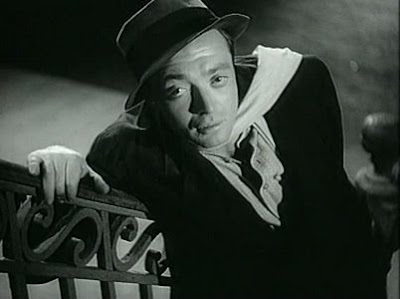 I'm almost ashamed to say I didn't fall in love with this movie. I did so want to! Perhaps it's that I was so bent on seeing Lorre's lovely creep-face. I personally wouldn't upgrade my VHS copy for the Warner Archive release, but it's by no means an unworthy film. Especially given it's credible background. I would most definitely give it a look if you're a completest or you just happen to cross its path. For those who aren't serious noir fiends or Peter Lorre fan-girls, it's really not a matter of urgency. 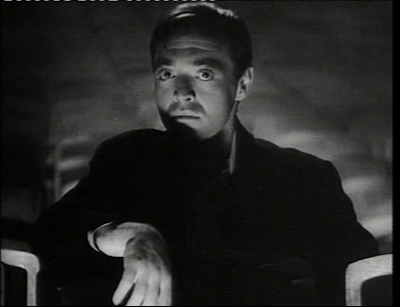 The celebration isn't over yet! This was a double feature. I might not get around to posting it tonight but be sure to check back for my review for the extremely out of print Face Behind the Mask in which Mr. Lorre THANKFULLY has a starring role!
Posted by Scumbalina at 11:38 PM