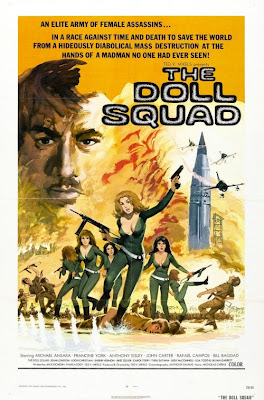 The second part of a Tura Satana double feature, the Doll Squad is in stark contrast next to Faster, Pussycat! Kill! Kill!. Bearing only Miss Satana's appearance as a similarity. Although they both star groups of women who are supposed to be tough. I can promise you right now, where as Faster, Pussycat! Kill! Kill! will makes you admire the all powerful woman, the Doll Squad will leave you questioning the female comprehension capacity. More than likely it speaks of the difference between Russ Meyer and Ted V. Mikels directing abilities. Not to say I didn't like it, but Faster Pussycat! Kill! Kill! is just a tough act to follow!

The story follows a secret agent by the name of Sabrina Kincaid. She's so dainty and well put together. She's also a vessel of ass-kicking, or so they would have us think. A super villain has blown up a rocket ship on it's way to outer space just to prove he can. It's up to Sabrina and her ragtag team of bad ass bitches to find the culprits and put a stop to any future disasters that may happen. Come to find out the bad guy is Sabrina's ex-boyfriend, Eamon O'Reilly, and he's started his own little community on an island to prepare for future world domination. How is he going to do it you ask? By spreading the bubonic plague of course. Yes, the now incredibly easy to cure Black Death. Our lady of the hour, Tura Satana plays one of the girls in the Doll Squad. She has less than five lines. She should have played Sabrina Kincaid. Francine York was a little too mommy-like to be a believable hard ass. Half of the amusement value of this film is because of how unbelievably inept the Doll Squad is. Not to mention their devilishly handsome counterpart, Eamon O'Reilly, played by Michael Ansara who was in Day of the Animals, the Manitou and did the voice for Mr. Freeze on Batman the Animated Series. He's equally as incompetent, but does so with a wink, a smile and sweaty armpits. 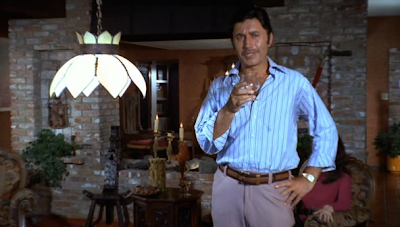 I can't make up my mind about the Doll Squad. It had some truly hysterical moments, and the way Mikels' creates explosions (especially of people) is one of the greatest things I've ever seen. Still, it does have the curse of dragging a bit in the middle. If I owned a copy and could give it a quick once over to get my own stills I'd probably have a little more to say about it. This is my second experience with a Ted V. Mikels film. The first being The Corpse Grinders in my teens, right when my obsession for schlock cinema was peaking. I remember very little about it other than being disappointed. At that point I was mainly taking in Lloyd Kaufman and Herschell Gordon Lewis movies. I wasn't ready for something as guttural as The Corpse Grinders. As far as the Doll Squad goes, it was an over all pleasant ride. Glad I met Sabrina and the gang. I've yet to find my place in Ted V. Mikels trashy world of cinema. Then again, I haven't seen Astro Zombies yet. Until then I'll just have to ride the medium on this one. 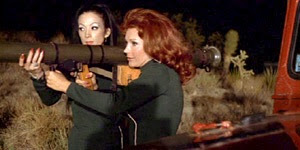 Posted by Scumbalina at 9:02 PM