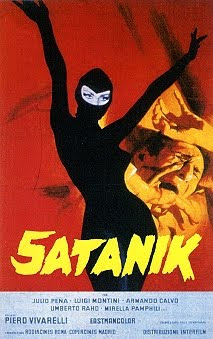 Satanik is one of the many Euro-crime movies to come out in the 60's. A category I generally enjoy because even when they're a bit slow or mediocre they have a stylish flair that belongs to this particular sub-genre. Satanik is based on the comic by Max Bunker who's most famous for doing Kriminal and Alan Ford. Kriminal was also made into a movie in 1968 directed by Umberto Lenzi. I always assumed it was a rip-off of Danger: Diabolik, and it probably is, but it certainly has a life of it's own. The Satanik comic is similar in flavor. The only difference, this super-kriminal is female. 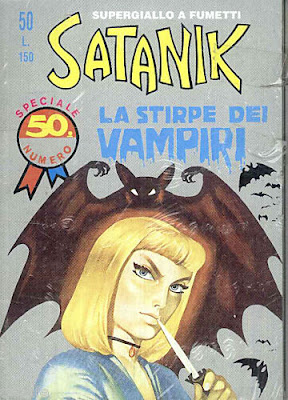 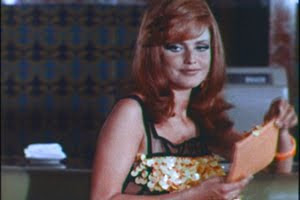 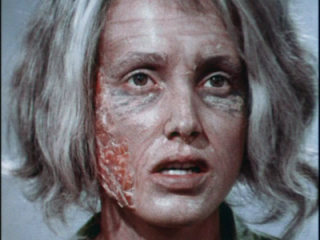 A hideously deformed lady scientist is working on cell regeneration with an elderly scientist. He tells her the formula isn't ready. They've been experimenting on animals and the subjects have become extremely hostile after being given the treatment. Unable to cope with her appearance any longer she kills her fellow colleague and takes the solution. She wretches, gags and passes out, when she awakens she's been transformed into a drop dead gorgeous sex pot. After this point the movie kind of goes no where. She philanders around using her looks to steal money or at least have men throw money at her. Nothing really out of the ordinary about that. The only real difference from her and any run in the mill gold digger is that she requires medicine that keeps her from looking like the crusty old hag that she really is. Obviously with Jekyll/Hyde overtones. The idea is that when she's ugly she's "normal" and when she's beautiful she's wicked, but that doesn't make any sense. She did kill the other Scientist in order to get the solution in the first place. Magda Konopka is great in the leading role. She looks pretty disgusting in her old bag make-up and transforms into a sultry swan-like bombshell. The plot is pretty watered down. I can still dig it because I have no problem just enjoying retro clothes and atmosphere (although the quality of my copy left something to be desired) but I can see how it often being bulked with Diabolik, Killing, Kilink (the unauthorized Turkish Killing) , Kriminal and other masked thieves, could leave something to be desired. The poster art is a bit misleading. She only wears the famous costume in one scene and it's for a striptease. No sneaking around stealing diamonds here. 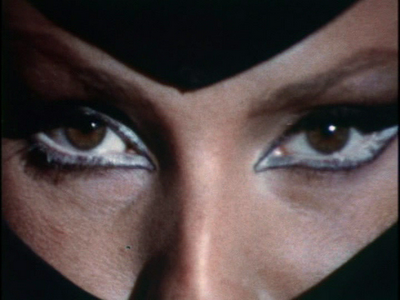 Is Satanik a bad movie? Not by my standards. It's not a shining example of Euro-Crime or even Super-Kriminal, but I still wouldn't write it off. It has an offbeat charm that only the sole lady-kriminal could offer and is certainly worth a look for devotees of retro Italian cinema. 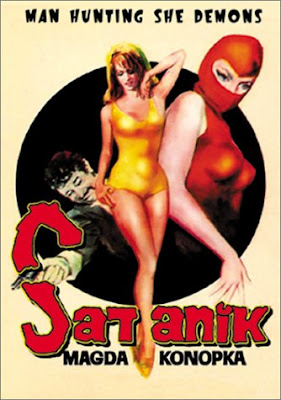 Posted by Scumbalina at 9:26 PM