A Film Critic's Year-Long Quest To Find The Worst Movie Ever Made, by Michael Adams 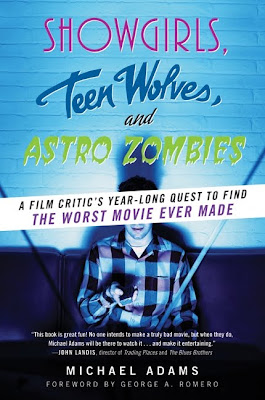 Ahh, my first book review, and what a perfectly appropriate choice for this blog. My husband bought this on a whim when I dropped him off at the bookstore while I had to go run some boring wedding errands I didn't want to subject him to. When I picked him up he said this looked like something we'd both like and started reading it out loud to me. He was right. We both got so into it we've been reading it out loud to each other on and off in our spare time during all of this marriage bedlam. Writer Michael Adams uses a toy bingo machine to decide his bad movie fate for an entire year. This immediately reminded me of our process of elimination. "the hat game". Whenever Arthur and I can't decide what movie to watch we write down the contenders and pull them out of a hat. They may not all be intentionally bad, but chances are most of them are video age dreck. Searching for the worst movie ever made is a noble feat and for me personally it sounds like a lot of fun. It takes a lot of dedication to stick it out. As much as I revel in everything awful there are territories I don't tread. This book makes me feel like I could even brave Da Hip Hop Witch and Cool as Ice. I won't lie, this awesome book will probably effect my reviews for a while.


I enjoyed reading his thoughts on the movies I had seen, but there were still quite a few that were foreign to me and his musings, no matter what the verdict was, were funny and honest. Mixed with anecdotes about trying to accomplish this goal while maintaining a balance of work and family. It's an engaging and relatable book to any cinephile with questionable taste. Interestingly, while writing the book he was the co-host of "The Movie Show" where he's forced to share his opinion on new releases. I imagine watching Bratz: the Movie (or something equally hideous) at work and coming home to suffer through a Uli Lommel marathon could feel like self induced torment.

The interviews with celebrities were educational. My favorite quote is from Mike Nelson of Mystery Science Theatre 3000 fame. "A lot of people say, 'What's the worst movie ever made?' The worst movie ever made, you wouldn't want to watch: it's boring.", when describing the difference between truly bad boring movies and the hilarity that is, his favorite (and one of mine), Roadhouse. Which is really where the bad movie road splits down the middle. Nobody likes boring movies, but any cult fanatic worth their salt wants to see how bad something can be and still be entertaining. It seems like Michael Adams had his fair share of both and for this brave attempt I salute him. Of course there really isn't a definite answer, I've seen many horrible movies that I hate equally and many wonderful movies that some consider unwatchable garbage. It's the thrill of the hunt and a love/hate relationship with these disasterpieces that makes it all worth it. So if you want some great recommendations to lovingly annihilate with a group of friends or just want to know what to avoid, Showgirls, Teen Wolves and Astro Zombies is a perfect place to start.

click here to read Movies So Bad They're Unmissable by Michael Adams
Posted by Scumbalina at 12:35 PM