When you watch as many movies as I do you tend to get bored easily. I think my compulsive movie watching is partially the result of Adult A.D.D. I'm always hoping to find something new and exciting. I become obsessed with and then burn myself out on themes. I did it with horror for a while, I spent so many years obsessing over all of these different facets of the genre that I found myself hardly able to watch any horror movies for two years or so. When I did catch one I couldn't muster up the passion for them I once felt. I'm pretty much over that now, but I'm still guilty of burning myself out on something. I also did this with sex movies. Watching tons of Euro-sleaze can get old after a while. You know you're over doing it when Pasolini's Salo: 120 Days of Sodom isn't even shocking anymore, just boring. Don't even get me started on Something Weird's brand of  nudie film. After a few Doris Wishman nudist camp movies it's enough to make you never want to see a naked body on film or IN LIFE ever again! So I cooled it on the perverted stuff for a while. Sex can be a pretty boring subject matter for film anyway. It has to be something really special to stand out. Like Russ Meyer for instance. Now there's a guy who can be make a sexy, campy, and artistic film. Even still, I find myself yawning at sex scenes that last longer than a minute. Whole movies revolving around the subject? I still have my doubts. However today's feature surprised me in the most delightful of ways. I finally got around to seeing Yasuzo Masamura's Blind Beast. 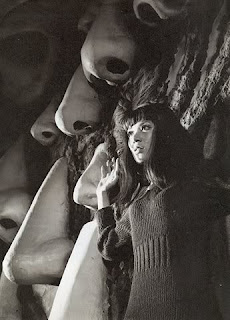 I'd been curious about it ever since it's release a few years ago. It was put out by Fantomas, who I've always been pleased with in the past. They tend to deliver on great offbeat movies with cool packaging and decent special features. After several years of this bouncing around my Netflix que I finally made the leap.
The story follows an attractive young model who's stalked and kidnapped by a blind sculptor who has become fixated on her exquisite physique by feeling up a sculpture of her at a museum. He decided he must have her to model for one his masterpiece, even if by force. He locks her up in his amazing studio which is comprised of wall to wall sculptures and installations of giant bizarre body parts. Although this subject should be revolting and offensive Masamura delivers a very sensitive and erotic manner of telling this sad and beautiful story. Naturally Aki protests and tries to escape, but inevitably she becomes sucked  in to the self destructive abyss and falls for her captor.

The images and ideas in this movie effected me profoundly. I've seen a lot of debauchery in my day, but this one was different. I felt somewhat naive watching. As if I was seeing something new. It's hard to believe this movie is 41 years old. There were moments I was frightened b what I was seeing and there were times I was magnetically entranced. I found myself loving and hating all of the characters at some point through the duration of the movie. The subject matter got pretty ugly towards the end and despite it's dismal ambiance I left the movie feeling peaceful and satisfied. The narration by Aki (Mako Midori) helped with that. It wasn't just a story of a woman kidnapped, raped and inevitably...worse. Her voice over gives the viewer peace of mind that she's not as out of control as she may seem at first glance. In the end, they were all perverts! And I love it!

It was based on a story by the famous Japanese writer Edogawa Rampo from which many film adaptations of his work have been made. I plan on seeing more of those. Also, the wonderful Yasuzo Masamura. Before this I'd only seen one of his earlier films, Giants and Toys. A WONDERFUL, yet completely different movie! I can hardly believe they were made by the same guy! You can bet I'll be cruising his filmography pretty fiercely as well!
Posted by Scumbalina at 12:13 AM