I've always had a penchant for baldness. That would explain my crush on Terry O'quinn circa ALWAYS. I seem to gravitate toward bald characters in movies. I especially love baldness in women! I'm still pining over the hard to find trashterpiece, Bald Headed Betty. Today's feature's initial attraction was the incredible ominous cover featuring a beautiful bald woman soaked in somber blue rays. I wasn't quite sure what to expect from Blue Sunshine. Sometimes I do endless research before watching a movie, other times I like to go into it blind.

A ten year delayed reaction to a bad batch of acid leads a group of well adjusted citizens to have the suckiest kind of flashback. The kind that leads to murder, mayhem and baldness. When one of these post-hippies flips out at a party and kills everyone (in turn, getting hit by a truck and being killed himself), the one survivor (cult actor Zalman King who bears a striking resemblance to Sean Penn!) is framed for the murders. He starts to realize that his predicament is related so some other murders and begins putting the pieces together to prove his innocence.


This being 1976, LSD had pretty much gone out of style. Most of our free love youngsters were now well into adulthood having hung up their peace pipes for polyester suits. It was the dawn of the disco era and closing in on the 80's was going to mean the end of drugsploitation movies of this nature. It had been years since a decent acid movie had been made. In this respect Blue Sunshine really is an under appreciated gem. Not only is it unique to it's decade but it's exploits the "dangers" of psychedelics better than pretty much any movie I've ever seen. It's a scary concept! The feel of this movie immediately reminded me of David Cronenberg, particularly the Brood and They Came from Within. It was directed by Jeff Lieberman who also made Squirm (1976), Just Before Dawn (1981), Remote Control (1988) and more recently Satan's Little Helper (2004).

The final outburst by a giant patchy bodyguard Frankenstein guy in the middle of a disco makes me smile. Did I mention there was baldness? 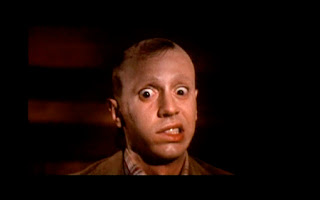 I ended up watching the marvelous new documentary on Ozploitation (Aussieploitation) Not Quite Hollywood. I was pretty much blown away and completely humbled by this whole world of bad assery I basically didn't even know existed. There was only a hand full of movies I had even heard of let alone scene. After the movie ended I'd immediately ran to the computer and started typing in memorable titles only to realize WHY I hadn't heard of them. A shitload have not made it to dvd in the US! Talk about a bummer! I decided to check out FYE today and see if I could dig anything up. I wasn't unsuccessful, I found several of the more well known Aussie flicks. I decided to start with the one I'd been putting off for years. Everyone's favorite telekinetic coma victim, Patrick. 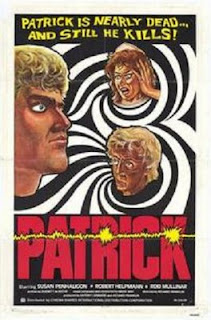 I can see why this is considered a classic. It's well made and has moments of sheer brilliance (IE: when the doctor is eating the frog) but I'd be lying if I said it didn't leave something to be desired. I thought the pacing was a bit slow with long scenes of dryness. We don't really watch genre films to sit idly for gaps of time. I was most impressed by Robert Thompson who plays Patrick. Being the title character it would make sense that he steals the show but then again he still has no speaking parts. His look is incredibly intense and it was his intensity that carries the whole film. It was directed by Richard Franklin who's a genre film house name having made Fantasm (1976), Road Games (1981), Psycho II (1983) and Cloak and Dagger (1984).


This was obviously an influential movie. Now that I've seen it I can tell that it must have been a big inspiration for Lucio Fulci's Aenigma (1987). Which I happen to love but always read bad things about, mainly that it's a rip-off of Carrie (1976), but If it's a rip-off of anything my vote is on Patrick. This wouldn't have been the only time the Italians ripped off Patrick. On Not Quite Hollywood they show clips from an unofficial sequel called Patrick Viva Ancora aka Patrick Still Lives (1980). It supposed to be terrible but I thought it looked fantastic! As a general rule I find that poorly and cheaply made sequels are often times more fun than the originals. I can't wait to track down a copy of that. 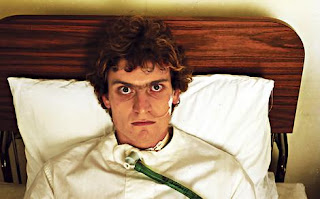 Maybe after all of the excitement of discovering a genre that is new to me and having been curious about this movie for six or seven years I wasn't mentally prepared for what the film actually would be. It has it's moment of trashy goodness but overall it's a very serious psychological thriller. It really is a good movie, perhaps not one of my favorites, but I'm glad I've finally seen it.