Like many movie fanatics I often find myself obsessively even sometimes unconsciously shopping for movies. I'm always behind at least a hundred movies and I don't really ever see myself catching up. It's all grist in the mill! Even when I'm broke or I slow down for a bit, it's a time consuming hobby and inevitably I'll be watching one of my movies and a something about it will stand out enough for me to do some research. As soon as the wheels are in motion I've discovered ten new movies that I must stop everything for. Because of this debilitating obsession I've always had a hard time saving money. I never really care much about that though. Money comes and goes but trivial movie knowledge is something you have to work at.

Like a record collector who's come across an estate sale or gets lucky at a thrift because someone's old relative has died and not knowing what else they do with it, they donate a priceless sixty year old record collection. Sometimes fate smiles upon you. Lately since Movie Gallery is going out of business I've been stocking up on all kinds of cheap stuff. Having tapped out the one by my house I decided to venture to the far regions of the County to visit one that I've only been in once, years ago when they were liquidating their VHS. I found a few things, nothing too notable (until I review them perhaps) but I couldn't get this other video store out of my head that's basically in the same parking lot. Video 98, one of the last Mom and Pop video stores in the area. I was thinking about all of the fun times I had renting movies there. Things like Gor, Electric Dreams, Flesh Gordon Meets the Cosmic Cheerleaders, the Ripper (with Tom Savini), the Creeps, Prehysteria and lots of other schlocky goodness that brought me and my friends much enjoyment over the years. I rented Blood Feast in a big porno box from there the first time I saw it! I also saw Naked Lunch and Body Bags there. As I'm wading through dumb modern DVD releases I couldn't help but be overwhelmed with nostalgia. I started to think about how long it's been since I've made really good video scores! I still frequent thrifts, and I find things every now and again, but it's rare that I have so much good stuff to choose from that it's overwhelming. In fact the only time this ever happens is when an old Mom and Pop shop starts to liquidate their VHS. Although this is a terribly sad event, it's also kind of exciting. A lot of people don't care for VHS anymore so now it's time for we collectors to preserve these relics, and of course enjoy them to the fullest! I decided I had to swing into Video 98, not with the intent to rent, it's way too far to make that trip twice in one week, but to see how they were holding up. A part of me feared that when I turned that corner to the back lot that I'd be looking at an empty building, but alas! They were open and thriving! 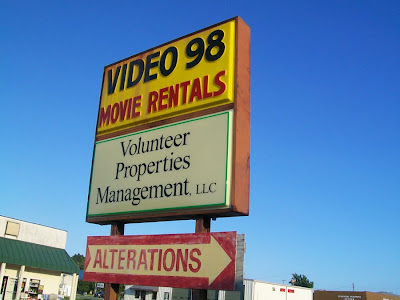 We went in and nothing had changed. Same set up, same little old Vietnamese lady behind the counter, all is well in the Universe! Right off the bat I asked "do you sell videos now or are you still just renting?" and my ears filled with the sound of 1,000 angels singing ... "yes, all of our videos are for sale for $5". I know what you're thinking, $5 is kinda steep, but a lot of these movies have never been in print on DVD. This place is literally an untapped goldmine. It's more than I'd like to spend, but it's a reasonable price for certain things I can't otherwise get unless I either buy it used on Amazon (in which case I'd spend the same or more + shipping) or from a bootleg website, and I try to avoid that IF I can. Plus it's nice just to be able to grab something from the shelf, from THE SOURCE in which I originally saw it as a CHILD and own it outright. I'm sure you have (or had) a place like this growing up. 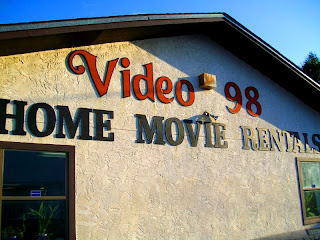 I don't have the advantage that most people do of having the internet on my phone. Had I been able to look titles up, I could have ensured the purchase of hard-to-find stuff only. I had to guess based on my knowledge of this-n-that. I fared pretty well though, of the nine movies I bought only three ended up having DVD releases and they were still films I consider to be worth $5. To mark this occasion I decided to review these nine movies in honor of Video 98. Soon I'll be moving away from here and although I'm sure there are plenty of Mom n' Pops in California, they won't be MY Mom n' Pops. I've reaped from the benefits of this small town for 24 years and now it's almost all tapped out and it's time for me to press on.

I contemplated not listing these until I review them but that doesn't really make any sense. I'll write them in parts and link them back here as I make time intermittently between other movies. I might even continue later on when I've caught up and I feel like I need another video store fix.

Stay tuned because I've already watched the first and I'm ready to write this review! 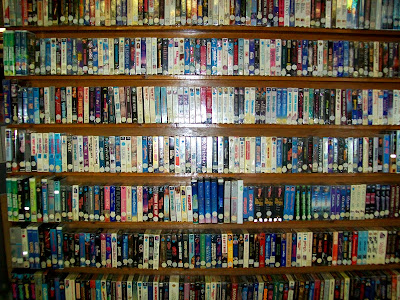