So I've decided to do this new thing! Sometimes I'm just not up for watching a whole movie. Like everyone, sometimes I just want to tune-in and vegge-out. Fortunately (sometimes) I don't have to deal with cable. I haven't had it at all during my adult life and aside from wishing I could catch TCM and Something Weird On-Demand (and Lost this last season) I don't miss it. 99% of television is a waste of time. That's not to say that there haven't been some totally awesome shows over the years! As I've gotten into collecting strange movies I've in turn amassed some great television programs. Things you might have seen in syndication on TV Land 10 years ago before they started showing bullshit like Everybody Loves Raymond (Gagsville!).

I've often said that my generation was really the last to have a really great run of programming. Kids today have shit to choose from. Hannah Montana... I dare not even look to see what Nickelodeon is showing these days. The days of Ren & Stimpy and the Adventures of Pete and Pete are long gone. Who needs cable anymore with the TV on DVD at our disposal? I could start my own incredible TV station with the selections I've amassed. I can't do that ,legally, but I can talk about them here on my blog. So from now on Tuesdays will be dedicated (though perhaps not exclusively) to whatever show has been catching my fancy late nights before I drift off to the Land of Nod. 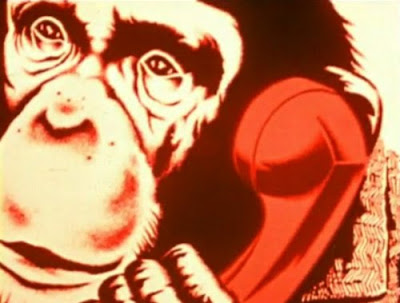 I had never seen this before I happened to get a 70's Saturday morning cartoon comp a friend of mine made. Though not exactly a cartoon, it's the only chimps-with-comically-dubbed-voice-overs-dressed-up-and-acting-like-people show I ever thought was actually funny. The head writers wrote for Get Smart and the Carol Burnett Show, which explains how this tongue-in-cheek goofiness worked so well. As I was watching it I couldn't help but think what a brilliant idea for a show it was. Costing almost nothing to produce, being able to re-use sets and costumes, most of the budget probably went into paying the filmmakers and animal trainers. The plot owed heavily to the themes in Get Smart. Lance Link is a bumbling spy whose voice is an obvious Don Adams impression, with a lady chimp side kick "Mata Hairi". 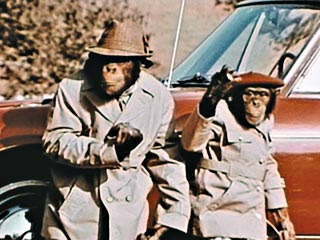 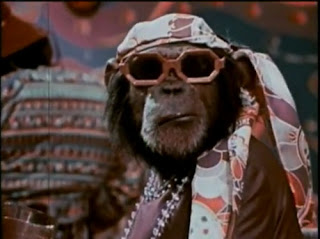 They're also in a band together called the Evolution Revolution with drummer "Bananas Marmoset" and "Sweetwater Gibbons" on the organ. All of the music was written by Steve Hoffman in bubblegum style. Reminiscent of a Don Kirshner production, in fact before I looked it up and found out otherwise I was convinced it was a Don Kirshner production. A major complement coming from me, whose taste is a direct descendant of my 12 year old self's obsession with the Monkees and the Archies.

I liked this show so much I think I'm going to have to upgrade to this nice little Image DVD set you can get on Amazon for a mere $12.49 which isn't quite complete but still not bad for the price. If you're like me and are late on the Lance Link bandwagon, watch the intro and see how cool this show is for yourself!

Posted by Scumbalina at 6:17 PM